1 million miles away from Earth a camera aboard NASA’s Deep Space Climate Observatory (DSCOVR) satellite captured a remarkable view of the far side of the moon orbiting Earth last month. Now, the images have been combined into an animated timelapse that is truly “EPIC.” 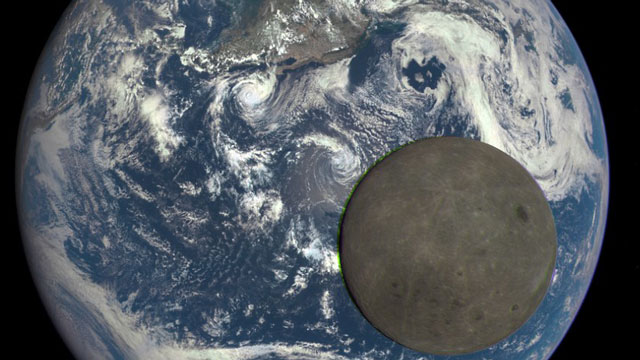 What is popularly known as the “dark side” of the moon is not really dark at all, but the side hidden from Earth’s view. Our first look at the far side wasn’t until the Soviet Luna 3 spacecraft sent back the first images in 1959.

NASA’s Earth Polychromatic Imaging Camera (EPIC) on DSCOVR took a series of images of the globe on July 16 over the Pacific Ocean. EPIC’s images of Earth are created by combining three exposures with different light filters. EPIC is certainly a fitting acronym for the powerful camera.

“The high quality of the EPIC images exceeded all of our expectations in resolution,” said Adam Szabo, DSCOVR project scientist when the first image was released last month. “The images clearly show desert sand structures, river systems and complex cloud patterns. There will be a huge wealth of new data for scientists to explore.”

More EPIC images are on their way. According to NASA, they plan to post color images of Earth daily once EPIC begins regular observations next month. This moon-Earth image will not happen all the time though; the camera will only capture the moon and Earth together about twice a year.

DSCOVR,  a partnership with NASA, NOAA and the U.S. Air Force is designed to help forecasters make better solar magnetic storm predictions. Geomagnetic storms occur when plasma and magnetic fields from the sun impact the Earth’s magnetic field, according to NOAA. Powerful solar eruptions can have various impacts on Earth, including interrupting telecommunications, GPS navigation and disrupting power grids.

The satellite took about 100 days to reach its final orbit destination between the sun and Earth after its February launch on a SpaceX Falcon 9 rocket from Cape Canaveral.