Home Sports Champions League: What Man Utd, Chelsea and Arsenal must do to make...

With just one game left in the group stage of this season’s Champions League, Manchester United, Chelsea and Arsenal still have work to do to join Manchester City in the last 16.

Here’s a look at what each team needs to qualify for February’s round of 16 – and how the situation is shaping up for the rest in Europe’s premier club competition. 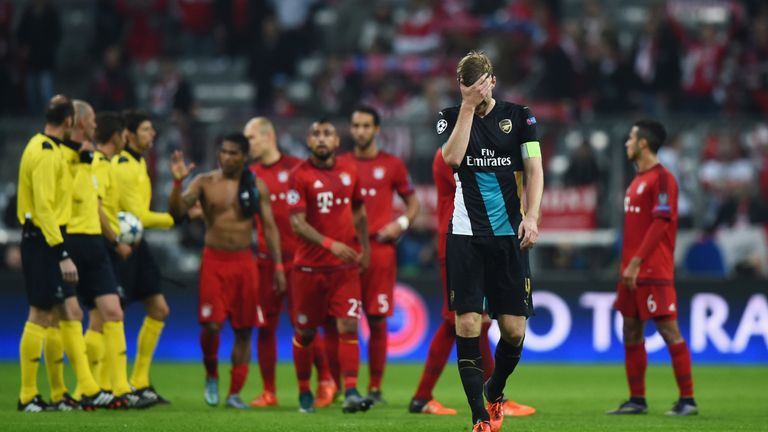 Arsenal’s hopes of reaching the last 16 were taken out of their own hands following their 5-1 thrashing at Bayern Munich, coupled with Olympiakos’ home win against Dinamo Zagreb.

But a 3-0 win over Zagreb at the Emirates – as Bayern thrashed Olympiakos – has kept alive their hopes of reaching the knockout stage for the 16th year in a row.

Wenger’s side must now beat Olympiakos on the road to progress to the knockout phase of the competition but a 1-0 or 2-1 win wouldn’t be enough.

Arsenal need to beat the Greeks either by two clear goals, or by any margin with the Gunners scoring at least three goals in Piraeus. 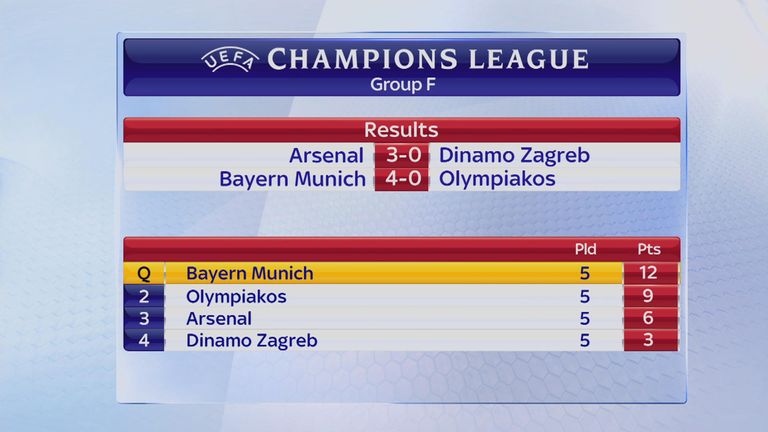 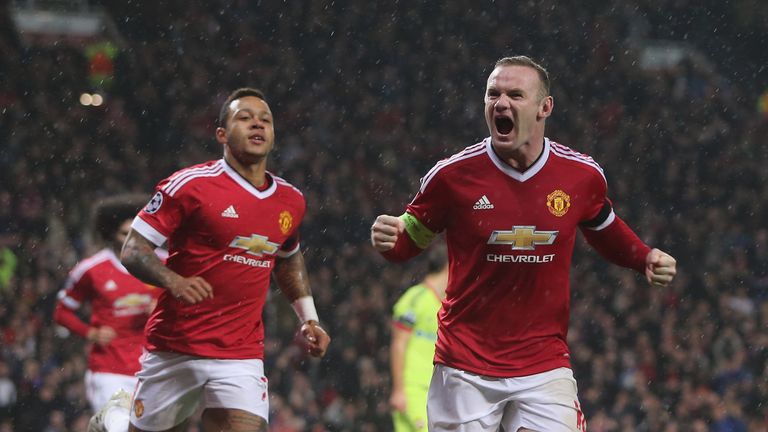 The 0-0 draw at home to PSV leaves United in second place in Group B, just a point above PSV in third and facing a trip to first-place Wolfsburg in the final game.

A win against the German side would see United finish top of the group but if PSV win at home to bottom side CSKA Moscow, a defeat or draw for United in Wolfsburg would see them drop out of the Champions League and into the Europa League.

If PSV draw against CSKA then a draw would send United through, but they could not afford to lose in that situation as PSV would then progress due to a superior head-to-head record. 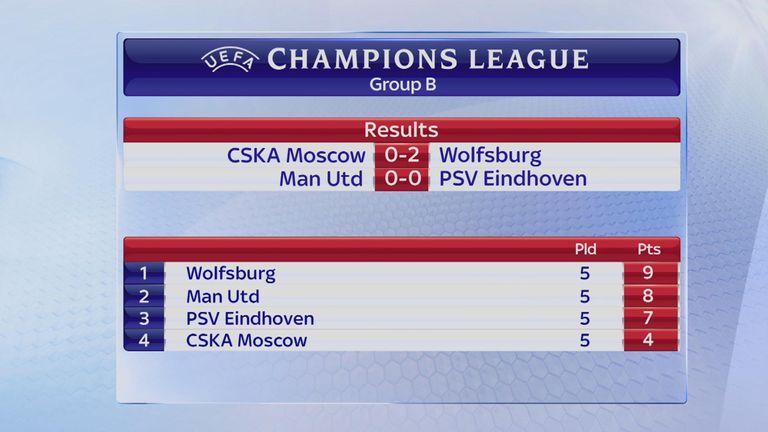 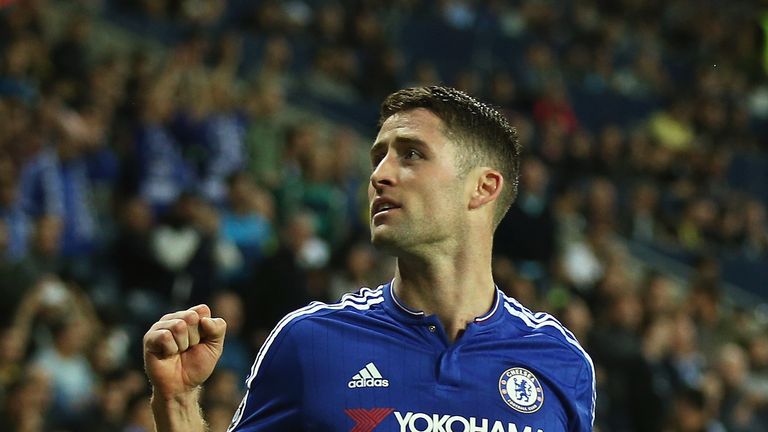 Chelsea have only failed to qualify for the Champions League knockout phase once, and a 2-1 win over Dynamo Kiev followed by a convincing 4-0 victory over Maccabi Tel Aviv mean they remain on course.

The Blues need a draw at home to Porto to guarantee their ball is in the pot for the draw in December, but could also qualify even if they lose to the Portuguese side should Dynamo Kiev slip up at home to the bottom club from Israel. 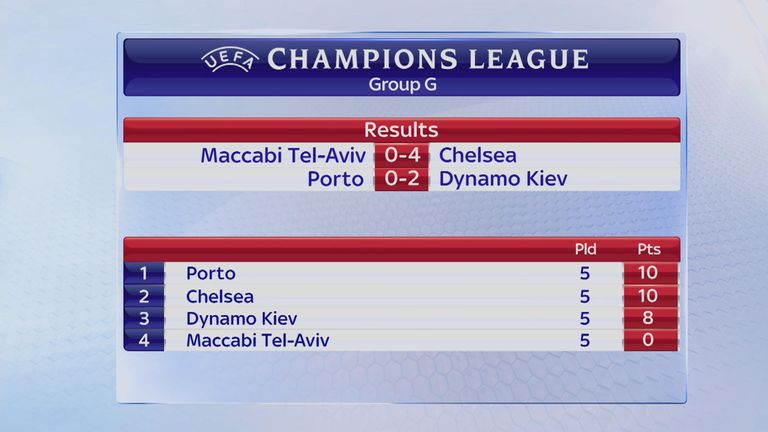 Manchester City progressed with two matches still to spare thanks to their impressive 3-1 win in Sevilla on Matchday Four, coupled with Borussia Monchengladbach’s 1-1 draw at home to Juventus.

Manuel Pellegrini said he was desperate to seal top spot in the group, but a 1-0 defeat at Juventus on Matchday Five has dented those hopes.

Victory takes Juventus two points clear of City, and Massimiliano Allegri’s side will need to slip up away at Sevilla on Matchday Six if City are to have any chance of qualifying for the last 16 as group winners. 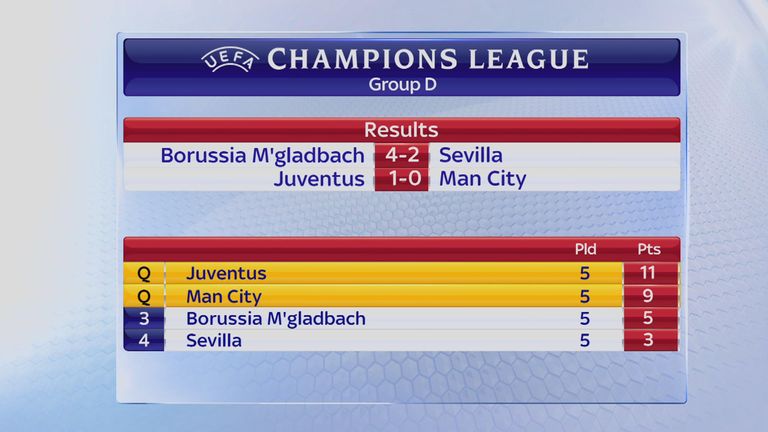 Real Madrid have already qualified from Group A and Paris Saint-Germain joined them with victory over Malmo on Matchday Five. Real held on to beat Shakhtar 4-3, and in doing so secured top spot due to their head-to-head record with PSG.

Meanwhile, defending champions Barcelona secured their place in the knockout stages with a 6-1 win over Roma. 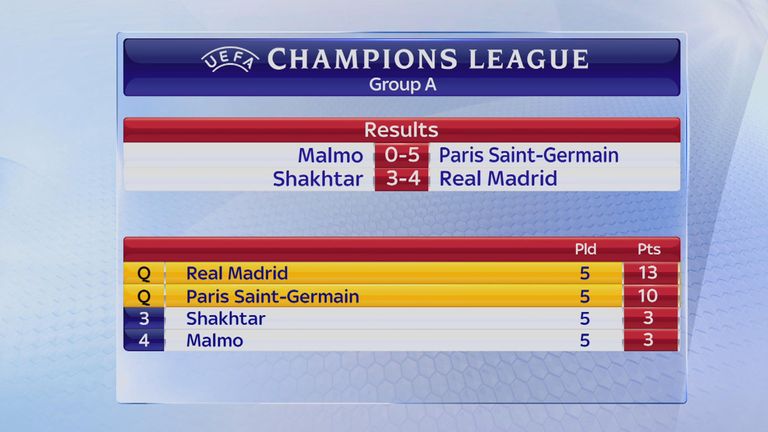 However, the race to join them from Group E is going down to the final round of fixtures with Roma, Bayer Leverkusen and BATE Borisov all still in with a chance of finishing as runners-up behind the holders.

And finally in Group H, Gent and Valencia are still battling it out to joinZenit in the knockout stage. Gent will make it if they can beat the Russian side but a slip up would allow Valencia to make it with a win at home to Lyon.