An Algerian man suspected of training with Islamic State terrorists in Syria and of planning a violent attack in Germanywas taken into custody at a refugee shelter in North Rhine-Westphalia early Thursday, as hundreds of police carried out antiterrorism raids in three German states, the police said. 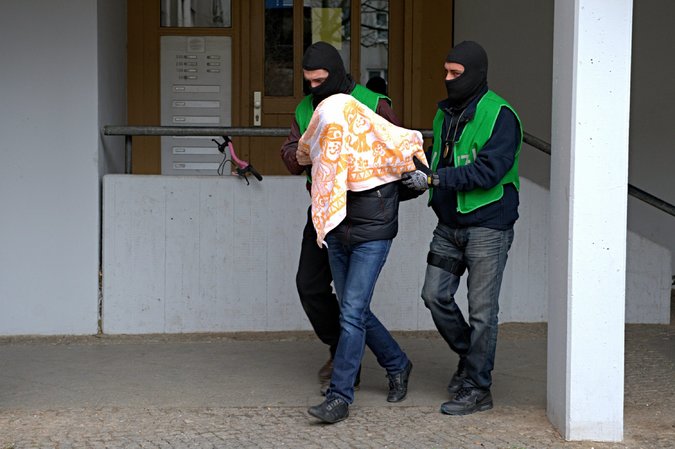 The man, who, in keeping with German law, was not identified, is 35 and was detained along with an Algerian woman whose arrest had been sought on different charges, according to a statement from the Berlin police.

A second Algerian man was also detained in the coordinated raids, which began at 6 a.m. in Berlin, Hanover and Attendorn, a town of about 25,000 around an hour’s drive northeast of Cologne, said a Berlin police spokesman, Stefan Redlich.

Two other Algerian men suspected of links to the Islamic State, also known as ISIS or ISIL, and believed to be “planning a violent act intended to seriously damage the state” were being sought, Mr. Redlich said.

One of those two suspects is 31 and thought to be in Berlin, and the second is 26 and is being sought in Hanover, according to a report on the public service broadcaster in Berlin.

The raids involved 450 police officers, Mr. Redlich said. In Berlin, they were centered on four apartments and two businesses, while the investigation in Attendorn and Hanover focused on refugee shelters.

No further details were given.

The police in North Rhine-Westphalia disclosed last month that a man who had most recently lived at a refugee shelter in the town of Recklinghausen was the lone assailant who was shot and killed in January as he approached a Paris police station on the anniversary of the assault in January 2015 on the French satirical newspaper Charlie Hebdo.

Germany, which took in more than one million migrants last year, has been on high alert since the Paris terrorist attacks in November that killed 130 people.

Four days after those assaults, a soccer match between Germany and the Netherlands in Hanover, which was to be attended by Chancellor Angela Merkel and senior ministers, was abruptly canceled after unspecified foreign intelligence agencies warned of an attack.

Thousands of police officers have beenmobilized to bolster security for five days of carnival celebrations, mainly in Cologne, Düsseldorf and the Rhineland. The festivities open on Thursday and continue through the start of Lent on Wednesday.

The authorities are especially concerned about security at the carnivals after hundreds of assaults — many of them sexual — were reported at New Year’s Eve celebrations in Cologne. The assaults and robberies were said to have been carried out by hundreds of mainly young men, including some newly arrived asylum seekers and many other immigrants.