Syrians Hiba Albassir and her husband Khaled arrived in Germany two years ago with only the bags they could carry. But that didn’t stop them from setting up their own business.

For them it was natural to rebuild the company they had left behind, whereas among many Germans this entrepreneurial spirit is in short supply. 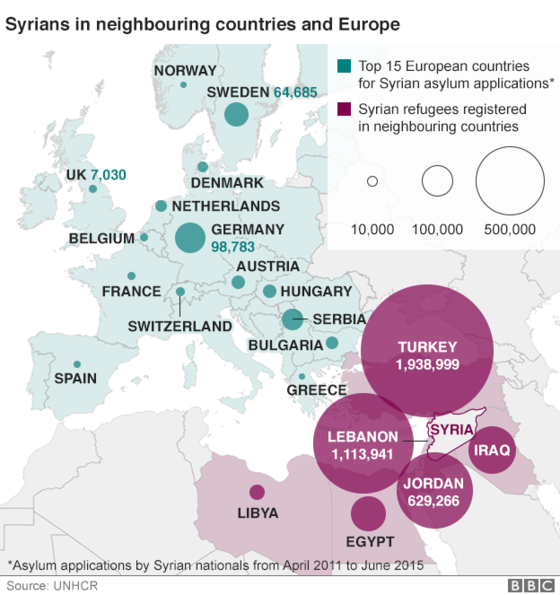 “Starting with nothing is not very easy, but just sitting around and doing nothing is much harder,” said 48-year-old Albassir whose company “Khashabna” – meaning “Our Wood” in Arabic – sells hand-made garden furniture imported from their former warehouse in Damascus.

The Global Entrepreneurship Monitor finds that despite a recent start-up boom in certain areas such as Berlin, Germany still has a relatively low level of entrepreneurial activity compared with other industrialised economies.

Statistics show that the overall number of companies founded each year has shrunk by more than 40 percent over the past decade and that the entrepreneurial activity of young people has decreased as a long-term trend.

With good jobs relatively plentiful, many German-born graduates prefer the greater safety of working for an established company rather than taking the risk of setting up on their own, said Rolf Sternberg, professor for economic geography at the University of Hanover.

“In Germany the culture prevails that if you fail, it’s not easy to shake off the stigma,” said Sternberg.

Michael Huether, head of Germany’s IW institute, warns that a lack of high-tech start-ups and a tendency towards risk aversion could hurt economic growth in the medium-term.

Breakthrough innovations are almost always made by start-ups or young, rapidly growing companies. Established corporations often have little interest in innovating, so as not to devalue their investments in existing technologies, Huether said.

Countries which historically have a large number of immigrants such as Australia, Israel and the United States have higher rates of entrepreneurial activity.

During the 1960s and 1970s, German industry recruited large numbers of “guest workers” from Turkey, North Africa and the former Yugoslavia. However, as technically temporary residents, they came to work in low-skilled jobs at German firms and not to establish new businesses.

This time, the latest influx of refugees – many of whom like Albassir ran a business back home – is seen as an opportunity to make Germany more enterprising.

Migrants are already responsible for one in five new businesses set up in recent years, according to KfW, a government-owned development bank. This is higher than their share of the population.

Around a third of those who applied for asylum last year came from Syria, where a culture of entrepreneurship is widespread. The biological father of Steve Jobs, who co-founded Apple, emigrated to the United States from Syria.

Many migrants may have little choice.

The experience of immigrants from eastern Europe shows they often struggle to get jobs that match their skills as employers don’t recognise their qualifications. Rather than be shunted into lower paid work, they choose self-employment.

Still, experts play down talk that the recent flood of new arrivals could lead to a rush of start-ups in the near term.

Of the 1.1 million who arrived last year, 25,000-50,000 might realistically set up their own business, estimates Ralf Saenger, an expert in self-employment at the Institute of Social Research in Mainz. This will take time.

A study by the Institute for the Labour Market and Employment found that fewer than 10 percent of refugees were employed in the year they arrived. After five years this number had risen to around 50 percent.

Many newcomers have exhausted their savings on people smugglers to cross the Mediterranean and will struggle to raise finance. Others may have their hands full just finding a place to live and learning German.

This is true for Syrian-born Akram Alfawakheeri who arrived in Germany last June after trekking overland via Greece. The 25-year-old previously founded a start-up in Istanbul and is keen to try again in Berlin but wants first to learn German, make connections and improve his I.T. skills.

“I like the entrepreneurial way of things,” Alfawakheeri said at a workshop in Berlin aimed at showing refugees how to start companies. “I failed once and I am willing to fail again until I can make something work.”

Beyond the language barrier and difficulty raising finance, enterprising refugees may face other obstacles.

One of the biggest struggles for Albassir, who speaks fluent German having spent time in the country as a student, was finding a shop to rent in Berlin since landlords wanted to see bank statements and proof of income.

She knows it will take several years to get her business established in Germany. In the meantime, she hopes her experience will encourage others.

“I think a lot of Syrians won’t need my inspiration. They’ll just do it because it comes from within. Syrians can’t sit around and just do nothing.”