With shoulder-length hair tumbling from beneath his knit skullcap, Hanamel Dorfman, a radical young Israeli settler, explains matter-of-factly on camera how hilltop settlement outposts like his own will continue to proliferate across the West Bank. From there, he says bluntly, Israelis will cross the Jordan River and start building on the other side.

Reminded that beyond the river there is another sovereign nation, Jordan, Mr. Dorfman says with an unwavering gaze, “Everything is temporary.”

The stunning statement comes in one of the final scenes of “The Settlers,” a documentary by an Israeli-American filmmaker, Shimon Dotan, that opens a rare window into the reclusive and politically explosive “hilltop youth” movement.

The film, which had its premiere at the Sundance Film Festival in January and was shown for the first time in Israel on Monday evening, suggests that the fringe group of religious hippies is underestimated in its ability to influence Israeli politics and thwart any possibility of peace with thePalestinians.

Mr. Dotan was born in Romania, immigrated to Israel as a boy and moved to New York in 1995. He introduced me to Mr. Dorfman and other settlers during a recent visit to Yishuv Hadaat, which is little more than a collection of mobile homes, a ramshackle synagogue and some playground equipment on the crest of a hill. We also went to the nearby outpost Esh Kodesh — the name means “Holy Fire” — where several residents welcomed us into their synagogue, but one chased our group down in a golf cart and expressed strong unhappiness about our arriving without asking their permission.

Mr. Dorfman, now 21, told me that Israel’s government was illegitimate because it did not rule based on the laws of the Torah. “It stays in its place in a pathetic attempt at survival,” he said.

Mr. Dorfman said he had been arrested numerous times, but not for any major attacks on Palestinians. Still, his ideology echoes a manifesto of a new group of extremist Jewish settler youth that Israeli security officials revealed last year. 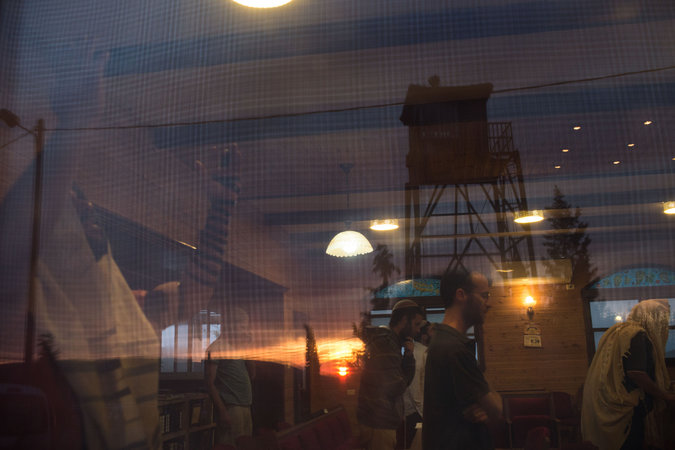 With an Israeli Army watch tower reflected in the window, settlers prayed this month at a synagogue in the Jewish settlement outpost of Esh Kodesh in the West Bank. CreditUriel Sinai for The New York Times

Mr. Dotan’s film chronicles the germination of the early settler movement after Israel captured the West Bank from Jordan in 1967, including the ideas and religious zeal that fueled it, and explores its latest extreme element: the hilltop youth.

They are but a tiny fraction of the more than 400,000 Israeli Jews living in the occupied West Bank, but the object of mounting concern as they are blamed for extreme violence there, like the arson last summer that killed a toddler and his parents in the village of Duma.

“The Settlers” is one of the first close-up views of the motives and personalities in a group that rarely opens up to outsiders. Though mainstream settler leaders denounce violence and try to distance themselves from the radical youth in the hills, Mr. Dotan sees the hilltop dwellers as a natural outgrowth of the original movement.

“Those who push it forward today are the hilltop youth,” he said. “And it seems to me a very dangerous direction.”

Often depicted as uneducated hooligans, the youth in the film come off as raw but canny — an American like me might call them street smart — using acts of defiance and violence to achieve their aims. There is also an aura of romance: Mr. Dorfman, with his long sidelocks, wispy beard and rimless glasses, seems more like a hard-eyed John Lennon than a backwoods militant.

At one point in the film, a settler with a guitar sings Bob Marley’s “No Woman No Cry” in a mixture of English and Hebrew while sitting at a fire. But there are also expressions of virulent racism, a glorification of violence and a desire to replace the modern state of Israel with a full-scale biblical kingdom that would extend as far as Iraq.

In one scene at Esh Kodesh, Pinhasi Bar-On, 25, speaks playfully with several young children about his legal troubles, asking them if they will come along on his escapades when they get older.

“What will you do with me?” Mr. Bar-On asks, as if teaching a preschool class.

“Beat up Arabs,” one child says. 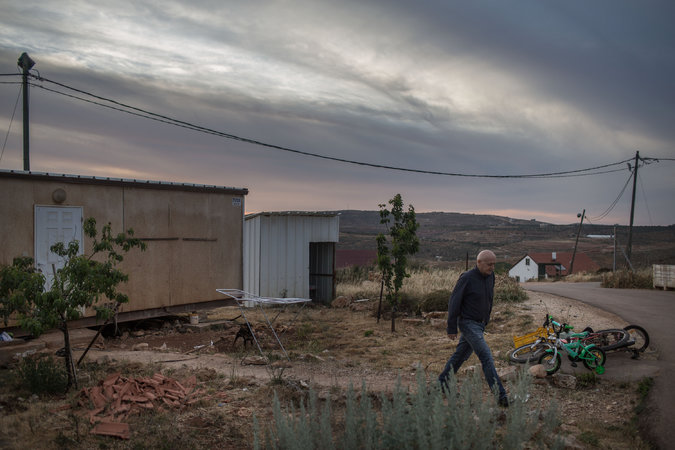 The Israeli-American filmmaker Shimon Dotan this month in Esh Kodesh. His documentary “The Settlers” is scheduled to be shown for the first time in Israel on Monday evening. CreditUriel Sinai for The New York Times

Mr. Dotan, 66, whose previous films include a feature based on a David Grossman novel (“The Smile of the Lamb,” 1986) and a documentary shot inside Israeli prisons (“Hot House,” 2007), said he had decided to explore the settlements because he views them as a threat to Israel from within.

Living abroad for decades had intensified his Zionism as he saw the Jewish state through expatriate eyes.

“If before that I had a very strong conviction that the state of Israel is probably the most meaningful thing to Jews all over the world,” he explained, “it became absolutely clear to me after spending time out of Israel.”

He said that he had interviewed more than 100 people across the West Bank and Israel for the film and that it had taken months to get access to the more radical outposts, where he tried to let the youth tell their story in their own words.

“Their world is farther away from my world than any other individual’s in the film,” he said. “With those guys, I feel completely disconnected. They do justify the killing and murder of non-Jews, period.”

As a storyteller, he added, “this gap that I felt probably attracted me to them more than to others.”

Yossi Klein Halevi, who studied the early settlers for his 2013 book, “Like Dreamers,” agreed with Mr. Dotan that the hilltop youth “have a significance far beyond their numbers.” Mr. Halevi, a senior fellow at the Shalom Hartman Institute, an educational center in Jerusalem, said the youth had “a strange mix between far-right and a hippie sensibility.” He said the mainstream “settler movement is terrified of these kids — it doesn’t know how to control them.”

Israeli officials estimate that a few dozen hilltop youth are responsible for the most violent acts on the West Bank. But Dror Etkes, who runs Kerem Navot, a human rights organization that opposes the Israeli occupation of the West Bank, said that there were about 100 far-flung outposts in the West Bank, with “many hundreds” of residents, and that large numbers of them participate in arson and vandalism of mosques, churches and olive groves. 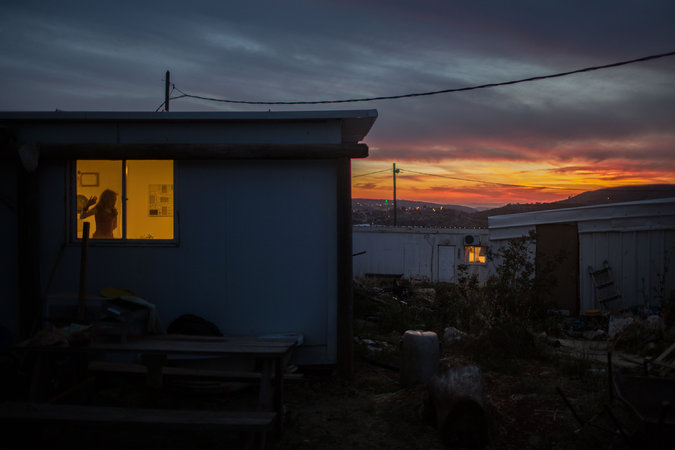 A girl looking out her window this month in Esh Kodesh. CreditUriel Sinai for The New York Times

Outposts like Esh Kodesh and Yishuv Hadaat that dot the hills above the settlement of Shilo, where Mr. Dotan filmed many of his hilltop scenes, are some “of the wildest, most violent areas of the West Bank,” Mr. Etkes said.

Mr. Bar-On’s views are so extreme that the residents of Esh Kodesh asked him to leave the outpost in February 2014. He was still living there during most of the filming of “The Settlers,” in which he openly admitted, “I’m a racist.”

“Arabs don’t belong in our country,” he said on camera. “Every morning I recite the prayer: Thank you, God, for not creating me a gentile. I’m a racist. I’ll stop for a Jewish hitchhiker and not an Arab because I’m a racist.”

Israeli security forces have recently moved to arrest the most violent elements of the hilltop youth, but several scenes in the movie suggest that the military is sometimes either confused by the fanaticism of the youth or, perhaps, not inclined to intervene.

Mr. Dotan said that at one point, his film crew was attacked and its equipment stolen, while Israeli soldiers stood by. (He said that he had lodged a criminal complaint, but that the police later informed him that it had been dismissed for lack of evidence.)

Mr. Dorfman seemed nervous as he showed us around Yishuv Hadaat, which is home to about 10 families.

He said his skullcap was hand-knit by his mother, who he said lives in a settlement close to Jerusalem. He wore black cargo pants emblazoned with a stylized image of Meir Kahane, the extremist rabbi who was murdered, captioned, “God will avenge his blood.”

Another settler profiled in Mr. Dotan’s film is Matti Blumberg, who lived in Esh Kodesh at the time and appears on screen harassing Palestinian farmers as they try to care for their fields and olive groves near the outpost.

Mr. Dotan asks, Who determined that this land is yours?

“For starters, God did,” she replies. “It says so explicitly in the Bible. It says, ‘All the land which thou seest.’”