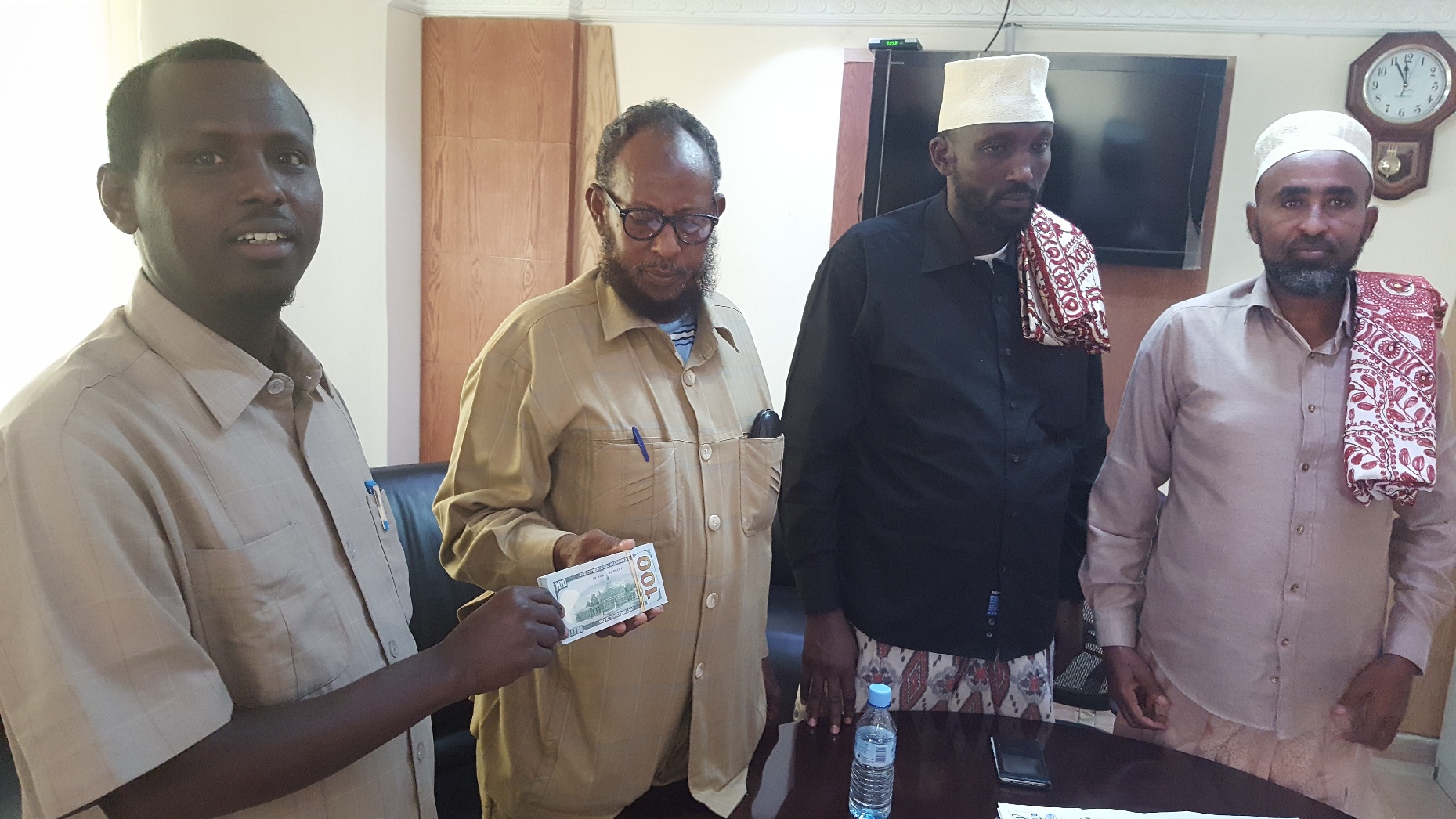 Today, a five-member committee representing the larger voluntary community mobilization caucus supervising the construction of a paved road that would connect Hargeisa, the capital city of the Republic of Somaliland, to Burao, the second largest city in the country, received a second cash injection from the leading African remittance company Dahabshiil. Deputy CEO of Dahabshiil Money Transfer (DMT), Ahmed Warsame Duale, handing over the donation, expressed how delighted the company – and the whole of Dahabshiil Group (DG) – was on being an integral part of almost all major community self-help drives in all areas that the DG services spanned.

“Dahabshiil Group will never cease to stand by communities that wish to improve livelihood, accessibility, infrastructure,  education, health, water, etc, for their areas. The companies stand by their customers wherever possible”, he said.
Gra

ciously receiving today’s contribution, the Chairman of the Hargeisa-Burao Road Supervisory Committee. a.k.a. ‘The Odweine Road’, Awil Dhiif pointed out how a successful completion of the 150-km road would cut a presently 4- to -5-hour journey by half.

“A motorist driving from Hargeisa, for instance”, he said ‘will reach Burao within the second hour without much effort’.

The Chairman stated that the road will very much enhance developmental schemes benefiting communities all along the length of the road and in adjacent areas that feeder roads branching off from the main tarmac road will supply.

Chairman stated that this last donation brought Dahabshiil’s contribution to the road to US$40 000 – an amount not paralleled to date by any single entity outside the government.

Sultan Hirey, on his part, hoped that other companies will emulate a deed worth emulating to help the construction of the road up another scale.

Sultan Gott hoped that Dahabshiil continues supporting the construction to the end.

“We request that you keep us in mind next year, too,” he said.

On the Dahabshiil side, DMT Public Relations Manager, Heiss, was also present.

All of the elders prayed that Dahabshiil continue its philanthropic strategies as that have proven instrumental in encouraging self-help schemes among Somali communities everywhere.

Dahabshiil operates in over 126 countries worldwide helping African communities in the Diaspora keep in constant, life-saving touch with loved ones left at home in the continent.