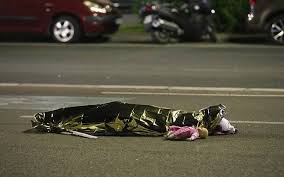 The toll of an attack on a Bastille Day fireworks celebration in the southern French city of Nice rose on Friday to 84 dead and 202 injured, as the government identified the assailant as a 31-year-old native of Tunisia, extended a national state of emergency and absorbed the shock of a third major terrorist attack in 19 months.

“We will not give in to the terrorist threat,” Prime Minister Manuel Valls said Friday morning after a cabinet meeting led by President François Hollande. But Mr. Valls also offered a grim observation for his countrymen: “The times have changed, and France is going to have to live with terrorism.”

Starting around 10:45 p.m. Thursday, the attacker mowed down scores of victims in Nice with a rented 19-ton refrigerated truck before engaging in a gunfight with three police officers, who pursued him down a storied seaside promenade before finally killing him.

The Paris prosecutor, François Molins, identified the man as Mohamed Lahouaiej Bouhlel, who was born on Jan. 3, 1985, and raised in Msaken, a town in northeastern Tunisia.

The police searched two locations in Nice on Friday, including a home with Mr. Bouhlel’s name outside it, and workers in hazardous-materials suits searched a truck, one much smaller than the one used in the attack. His ex-wife was held for questioning.

No organized group has claimed responsibility for the attack, although online accounts associated with the Islamic State and Al Qaeda have cheered it

Mr. Bouhlel had a history of petty crime, including theft, going back to 2010, and he received a six-month suspended sentence in March for assaulting a driver during an altercation in January.

“However, he is completely unknown by intelligence services, both at the national and local levels,” Mr. Molins said. “He has never been in any database or been flagged for radicalization.”

Mr. Bouhlel rented the truck on Monday from a company in Saint-Laurent-du-Var, a town about six miles east of Nice, near the city’s airport, and then parked it in the Auriol neighborhood of eastern Nice.

At 9:34 p.m. on Thursday, according to surveillance footage, Mr. Bouhlel arrived by bicycle in Auriol and entered the truck. He then drove it westward, arriving at 10:30 in the Magnan neighborhood, north of the Promenade des Anglais, a famous seaside boulevard.

His deadly rampage began around 15 minutes later, when he drove the truck south and then turned onto the promenade, which was packed with spectators watching the end of the Bastille Day fireworks.

Mr. Bouhlel initially mowed down two people and then continued driving for 1.1 miles eastward, running over people left and right. Outside theNegresco Hotel, Mr. Bouhlel fired at three police officers; they returned fire, and then pursued him for about a thousand feet. They shot and killed him outside a Hyatt hotel and casino.

The U.S. Should Sanction Somalia’s President for Human Trafficking

Abu Dhabi Is Safest City in the World