The Clinton campaign has blasted FBI Director James Comey for “blatant double standards” over the new inquiry into Hillary Clinton’s email use. 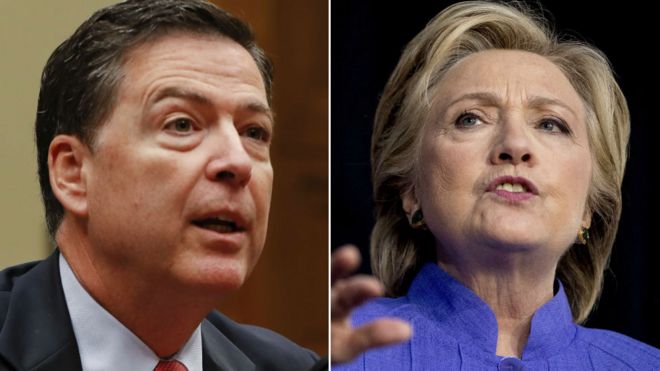 The comments came after US media reports that Mr Comey had urged against publically accusing Russia of interfering in the US election, including alleged email hacking.

Mr Comey’s concern about releasing the information was due to the proximity to the election, reports say.

The statement that Mr Comey reportedly declined to sign off on was released by the Department of Homeland Security and the Office of the Director of National Intelligence on 7 October.

“The US intelligence community is confident that the Russian Government directed the recent compromises of emails from US persons and institutions, including from US political organisations… these thefts and disclosures are intended to interfere with the US election process,” it said.

Mr Comey agreed with the statement but was against making it public before the election, according to US media.

There have been allegations that Russian hackers have targeted the Democrats in an effort to skew the election in favour of Donald Trump.

“It is impossible to view this as anything less than a blatant double standard,” Clinton campaign manager Robby Mook said. He also called on Mr Comey to “immediately explain this incongruence and apply the same standard to Donald Trump’s associates as he has applied to Hillary Clinton’s.”

Mr Comey has faced a fierce backlash for announcing on Friday, just 11 days before the presidential election, that the FBI is investigating new emails that may be linked to its probe into Mrs Clinton’s private email server.

It emerged in March 2015 that Mrs Clinton had been breaking federal rules by operating a private email server while she was secretary of state from 2009-13.

Her lawyers combed through the server and provided the State Department with 30,000 work-related emails, but her campaign deleted another 33,000 messages, saying they were personal in nature.

Mr Comey concluded in July that Mrs Clinton had been “extremely careless” in handling classified information, but there were no grounds for any charges.

But on Friday, he told Congress he had learned of fresh emails which might be “pertinent” to its previous inquiry and renewed the FBI probe.

The FBI has reportedly obtained a warrant to search the cache of emails belonging to Ms Abedin, which are believed to have been found on her estranged husband’s laptop.

There are reportedly 650,000 emails to search through on the laptop, but it is unclear who sent or received the emails or what they were about.

On Monday, Mr Trump said the FBI was going to find a “motherlode” of missing emails and he hoped the Democratic candidate’s 33,000 deleted messages could now be recovered.

Mrs Clinton later told a rally she had nothing to hide.

Mr Comey and Attorney General Loretta Lynch have said they are working quickly to sift through the newly discovered emails.

Earlier, a spokesman for President Barack Obama said the president did not suspect Mr Comey of trying to secretly influence the election through his announcement on Friday of the inquiry and the White House would neither defend nor criticise the FBI decision.

Josh Earnest said Mr Comey was “a man of integrity, a man of character, a man of principle and he has a very difficult job”.

Democrats have angrily demanded that the embattled Mr Comey rapidly make public what the agency knows about the new email trove.

On Sunday, Democratic leader in the US Senate Harry Reid accused Mr Comey of violating an act which bars officials from influencing an election by revealing the bureau was investigating emails possibly linked to Mrs Clinton.

US election: Why are Clinton and Trump so unpopular?