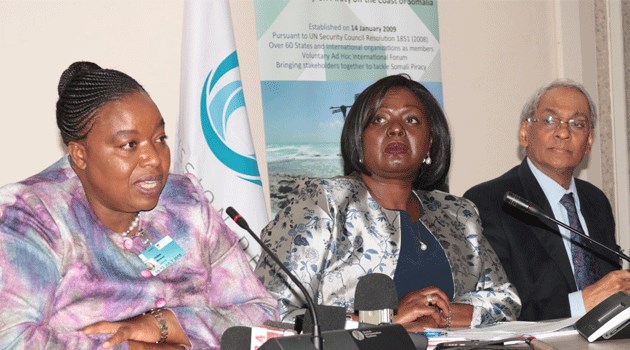 The Contact Group on Piracy off the Coast of Somalia (CGPCS) is seeking an expanded mandate to tackle piracy-linked crimes such as terrorism.

According to the Secretary General of the Indian Ocean Commission (IOC) Hamada Madi, the existential threat posed by piracy could only be tackled effectively with a wider mandate.
“We are making a formal proposal that the CGPCS becomes a permanent organization that would deal with piracy and many issues linked either directly or indirectly,” he said.

Madi who was speaking during a media briefing on the sidelines of the 21st Plenary Session of the CGPCS at the United Nations Complex in Gigiri, Nairobi, singled out terrorism and cross-border crime as key drivers of piracy.

Omamo reiterated Kenya’s commitment to peace and stability in Somalia which she said was critical in the ongoing campaign to reduce the vulnerability of populations to being enlisted to terror cells.

“It is our duty to reduce the vulnerabilities of our people, to empower them to take charge of their lives, to increase economic prosperity, and that can only come when there’s peace and stability,” she said.

Omamo noted efforts being made by the Kenya Defence Forces in the war against piracy at the Indian Ocean saying the war on terrorism will be sustained.

“We must fight these ills – piracy and terrorism – in tandem because in many ways terrorism extends into the waters through piracy and piracy extends to land through terrorism,” she observed.

In her comments CS Juma emphasized the importance of enhanced maritime security saying piracy was a threat to Kenya’s ambition of harnessing the potential of the blue economy.

“Maritime security becomes very important to foundation the blue economy discussions and strategies that will improve the prosperity of coastal communities, improving their livelihoods, growing our prosperity and improving humanity in general,” the Foreign Affairs CS stated.

She said maritime security and blue economy were intertwined hence the government’s commitment to the war against piracy.

According to Oceans Beyond Piracy’s (OBP) State of Maritime Piracy Report (2017), incidents of sea robbery in the East African coast alone doubled from 27 in 2016 to 54 in the year under review.

The study reported a total of 21 kidnappings, thrice the number reported in 2016.

According to the report, 100 seafarers were taken hostage among whom 90 were held for more than a day compared to only 56 in 2016. Two killings were reported.

The ongoing session CGPCS has attracted delegates from 68 nations numbering over 200 is set to conclude on Friday with a common declaration on deterrence of piracy threats off the coast of Somalia.

Mauritius currently chairs the CGPCS which was established by the United Nations on January 14, 2009 to facilitate the discussion of actions and policies among States working to suppress piracy on the Somali coast.

The establishment of the Working Group was in response to the United Nations Security Council Resolution 1851 of 2008 which was later replaced with resolution 1918 of 2010.

The Working Group comprises among others a virtual legal forum, Law Enforcement Task Force, and the United Nations Trust Fund.