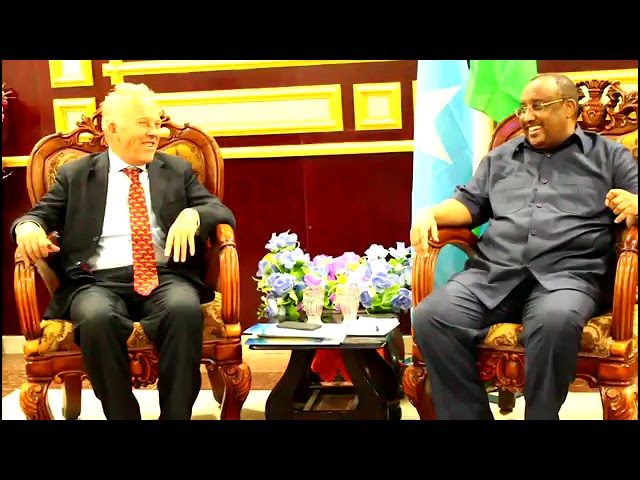 The UN Special Representative of the Secretary-General for Somalia, Michael Keating, made a visit to Garowe, the seat of the Puntland federal state of Somalia, as part of an official tour to the region that saw him stop at Galkayu earlier.

Mr. Keating met, first, met with Puntland President, Dr Abdiweli Mohamed Ali Gass, with whom he discussed a number of outstanding issues spanning from the progress of development projects the varied UN branches were carrying out in the federal state to the incendiary issue of the Tukaraq area where Somaliland troops were facing hordes of militias organized by Garowe to defend it.

Speaking the press at the end of their meeting, Mr. Gass summed up the points discussed before the mike went over to the Special Representative.

“I and Mr Keating had an in-depth discussion on a number of topics which included UN support programmes to Puntland, issues that touched on the progress of stabilization in Somalia, the support and structuring of a dependable, fully launched armed forces to secure overall peace and, of course, the issue of Tukaraq,” President Gass stated.

“As to be expected, we told the Special Representative that peace or dialogue was possible while the aggressor, Somaliland, occupied land it invaded,” he added.

“We made our unbudging, unnegotiable position on this matter very clear to Mr. Keating, and we expect that he meet with other sections of the society such as traditional leaders before he wraps up visit,” he said.

Looking a bit bemused by the thought, he added ‘Of course he wishes to strike peace on this issue. That is his job”.

Mr. Keating on his part expressed that he was always delighted to visit Garowe and that he had, in fact, lost count of the number of visits he made to the area due to that.

He said for the three years he was coming to Garowe he could see the progress made on expanding city limits, infrastructure, roads, and airport.

Mr. Keating said he and Mr. Gass covered a lot of ground which included the ‘outcome of the Brussels meeting, the prospect of more loans and grants for Somalia and how all Somalis can benefit from that.

He said he expected that ‘Puntland, as well as other federal states, will benefit much from improved public financial management systems and the success of the federal government to attract more loans and grants’.

On his discussion with Dr. Gass on the situation at Tukkaraq, Mr. Keating said: “we need to try to prevent violence and find a political solution that recognizes the legitimate concerns of both Puntland and, indeed, Somaliland…but that also involves the people of the region in decisions about their own future.”

“That is something the UN will be willing to assist, and I look forward to try move that forwards in the coming few weeks”, Mr. Keating stressed.

Mr. Keating, sources reveal, met with a caucus of traditional leaders organized to support and accentuate points Mr. Gass raised with him, and especially as regards to the Puntland position on Tukkaraq and other disputed areas geographically within the boundaries of the Republic of Somaliland as inherited in 1960 from Britain under which it was placed as a protectorate prior to full independence on 26 June 1960.