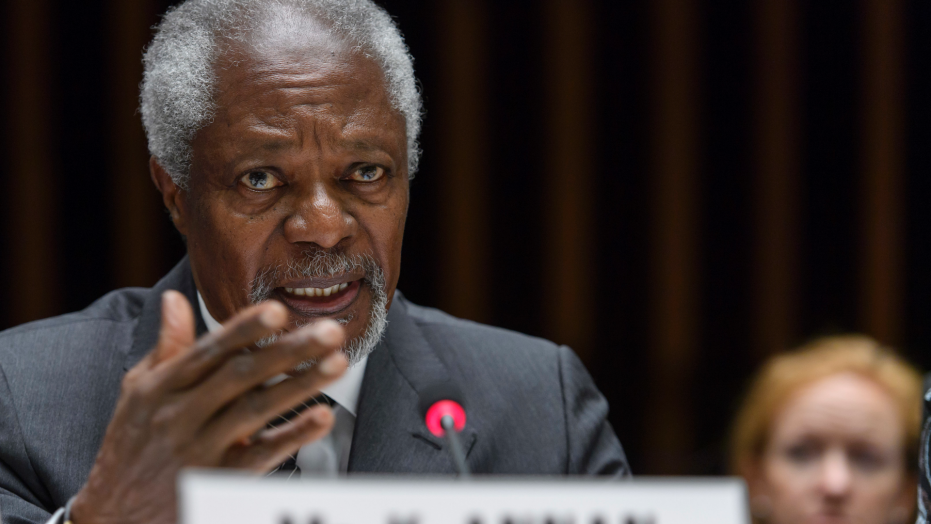 The Latest on the death of former U.N. secretary-general Kofi Annan (all times local):

Shocked reactions are pouring in after the death of former U.N. secretary-general and Nobel Peace Prize winner Kofi Annan at age 80 after a short illness.

“He was a good friend whom I saw only weeks ago,” says former British Prime Minister Tony Blair.

“International leader, wise mentor, valuable adviser, good friend, role model,” says U.N. refugee chief Filippo Grandi. “We at UNHCR — and millions of others around the world — will miss him very much.”

The Elders, an elite group of former leaders founded by Nelson Mandela, say they are “shocked and deeply saddened” by the death of their colleague and chair Kofi Annan at age 80 after a short illness.

In a statement, The Elders call the former U.N. secretary-general and Nobel Peace Prize winner “a voice of great authority and wisdom in public and private.”

The organization says Annan’s most recent work was in visits to South Africa and Zimbabwe, where the country was preparing for a historic presidential election.

“His quiet advice on how best to defuse impending crises was in constant demand from all corners of the globe, in particular from Africa,” says deputy chair Gro Harlem Brundtland.

Kofi Annan, one of the world’s most celebrated diplomats and a charismatic symbol of the United Nations who rose through its ranks to become the first black African secretary-general, has died. He was 80.

His foundation announced his death in a tweet on Saturday, saying that he died after a short unspecified illness.

Annan spent virtually his entire career as an administrator in the United Nations. He served two terms as secretary-general from Jan. 1, 1997 to Dec. 31, 2006, capped nearly mid-way when he and the U.N. were jointly awarded the Nobel Peace Prize in 2001.

During his tenure, Annan presided over some of the worst failures and scandals at the world body, one of its most turbulent periods since its founding in 1945.

“Kofi Annan, former Secretary General of the United Nations and Nobel Peace Laureate, passed away peacefully,” after a “short illness,” they said in a statement that was tweeted. The illness was unspecified.

It is with immense sadness that the Annan family and the Kofi Annan Foundation announce that Kofi Annan, former Secretary General of the United Nations and Nobel Peace Laureate, passed away peacefully on Saturday 18th August after a short illness… pic.twitter.com/42nGOxmcPZ

Annan, from Ghana, won the Nobel Peace Prize for his far-reaching humanitarian work in 2001.

He was also the first black African to serve in the U.N. role as the world’s top diplomat, the BBC reported.

“Kofi Annan was a guiding force for good. It is with profound sadness that I learned of his passing. In many ways, Kofi Annan was the United Nations,” Guterres said. “He rose through the ranks to lead the organization into the new millennium with matchless dignity and determination.”

"Kofi Annan was a guiding force for good. It is with profound sadness that I learned of his passing. In many ways, Kofi Annan was the United Nations." @antonioguterres on passing of former SG @KofiAnnan @UN Full statement here https://t.co/TS3GNnXzvM

Guterres sent his heartfelt condolences to the “proud son of Africa who became a global champion for peace and all humanity.”

“Kofi Annan was not just a great breaker of glass ceilings, he was a leader and a visionary, who worked to foster international cooperation and a more united world,” David Lammy, a British member of Parliament tweeted.

Kofi Annan was not just a great breaker of glass ceilings, he was a leader and a visionary, who worked to foster international cooperation and a more united world. pic.twitter.com/1MNSPhWuuR

“One of the first people I met after arriving in Ghana, so shocked to hear of the passing of Kofi Annan. A remarkable man. Gone too soon,” Iain Walker, British High Commissioner to Ghana, tweeted.

During his tenure, Annan presided over some of the worst failures and scandals at the world body, one of its most turbulent periods since its founding in 1945.

Annan was chief architect of what became known as the Millennium Development Goals, and played a central role in creating the Global Fund to Fight AIDS, Tuberculosis and Malaria and the U.N.’s first counter-terrorism strategy.

He also had special assignments. After Iraq invaded Kuwait in 1990, he facilitated the repatriation from Iraq of more than 900 international staff and other non-Iraqi nationals, and the release of western hostages in Iraq. He led the initial negotiations with Iraq for the sale of oil in exchange for humanitarian relief.

As special envoy to Syria in 2012, Annan won international backing for a six-point plan for peace. The U.N. deployed a 300-member observer force to monitor a cease-fire, but peace never took hold and Annan was unable to surmount the bitter stalemate among Security Council powers. He resigned in frustration seven months into the job, as the civil war raged on.

He remained a vocal commentator on troubles like the refugee crisis; promoted good governance, anti-corruption measures and sustainable agriculture in Africa; and pushed efforts in the fight against illegal drug trafficking.

At a farewell news conference, Annan listed as top achievements the promotion of human rights, the fighting to close the gap between extreme poverty and immense wealth, and the U.N. campaign to fight infectious diseases like AIDS.

Annan retained connections to many international organizations. He was chancellor of the University of Ghana, a fellow at New York’s Columbia University, and professor at the Lee Kuan Yew School of Public Policy in Singapore.

Annan is survived by his wife Nane and their children Ama, Kojo and Nina.

By Amy Lieu | Fox News
The Associated Press contributed to this report.