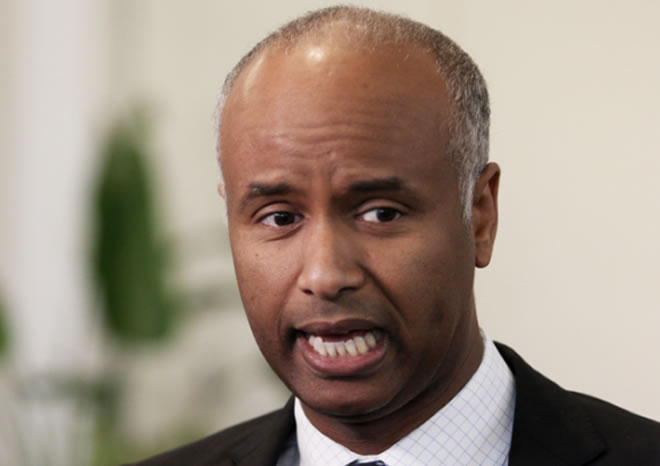 The language is unusually strong for Ahmed Hussen, who speaks often about Canada’s ‘strict and efficient immigration and border-control system’

The number of people seeking asylum in Canada is rising “far beyond” what the existing system can handle, according to a recent letter from Immigration Minister Ahmed Hussen obtained by the National Post.

“Without changes to improve efficiency and productivity of the asylum process, wait times and backlogs will only continue to grow,” Hussen writes in the Aug. 14 letter, addressed to the Canadian Bar Association. “This situation is not sustainable, nor is it fair to the people who need Canada’s protection.”

The language is unusually strong for Hussen, who speaks often about Canada’s “strict and efficient immigration and border-control system,” including in an op-ed for the Toronto Star last month.

His recent correspondence with Barbara Jo Caruso, chair of the immigration law section of the Canadian Bar Association, highlights a sense of urgency as Hussen considers how to reform the backlogged asylum system. But it gives little insight into what changes the Trudeau government is considering following a report released in June that recommended a major overhaul of the Immigration and Refugee Board (IRB), the arm’s-length body that handles asylum claims.

“While the department has carefully analyzed the findings and recommendations of the report, it would be premature to speculate on any future changes to the asylum system,” Hussen writes in the letter.

Sergio Karas, an immigration lawyer and analyst, called Hussen’s letter “an admission of failure … by the Liberal government,” and said the existing system wasn’t designed to accommodate the current volume of asylum claims.

“I honestly do not understand how it is that the federal government can look the people of Canada in the eye and say that the system works,” he said. “Because the system has collapsed.”

Last year, Canada saw a dramatic uptick in asylum seekers entering the country between official border crossings, particularly in rural Quebec. More than 20,000 irregular asylum seekers entered Canada last year, and more than 12,000 have in 2018, though the rate of new arrivals has slowed considerably since its peak last summer.

A spokesperson for Hussen told the Post the minister recognizes the need to increase the IRB’s capacity, but said the problems pre-date the recent influx of asylum seekers. In fact, Hussen was instructed in his February 2017 mandate letter to improve Canada’s asylum system.

“We inherited a massive backlog of asylum claims after a decade of short-sighted and damaging policies under the Harper Conservatives,” Mathieu Genest said in an email statement. “This situation has only been exacerbated by the increase in asylum seekers, which has been growing since 2013.”

Genest said the government invested $74 million in the 2018 budget to help the IRB finalize claims more quickly, in part by hiring 64 new claim adjudicators and support staff. Still, IRB data shows there were more than 55,000 refugee claims pending as of June 30.

An independent review of the quasi-judicial IRB published in June suggested a number of reforms, including the creation of a new refugee protection agency that would report directly to the immigration minister. A second option would maintain the existing structure of the asylum system, but add a new oversight body.

Hussen wrote Caruso in response to a letter in June, shortly before the review was released, calling on the government not to do away with the IRB’s independence. “The IRB stands as a model around the world for independent refugee determination, separate from other arms of government,” she wrote.

In his response, Hussen said the government will ensure “that claims are reviewed by impartial and qualified decision makers,” but gave no other indication of what reforms are coming.

In a follow-up letter, dated Aug. 15, Caruso again urged the government not to create a new body that would “bring the refugee determination process under further government control, undermining the independence of IRB decision-making.”

Instead, she suggested other reforms, including improving the legal aid system to ensure refugee claimants can access lawyers, and filling the “high number of vacancies” in the IRB divisions dealing with refugee claims and appeals.

She also suggests the IRB should “adopt new technologies,” such as using email to correspond with immigration lawyers, which it does not currently do. “Given the widespread acceptance of email by businesses, governments and other non-governmental organizations,” she wrote, the IRB’s “practice is anomalous (and) slows the process considerably.”

By Maura Forrest and Adrian Humphreys