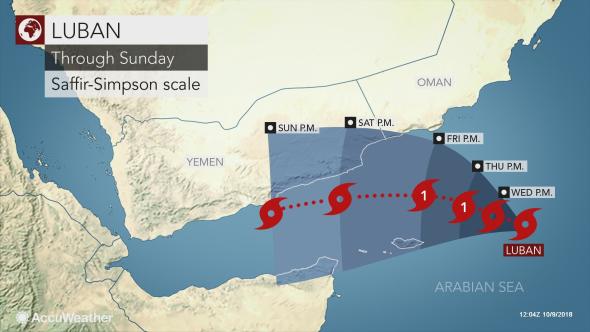 Cyclonic Storm Luban will bring the risk for widespread flooding along with mudslides and damaging winds to parts of Yemen in the coming days.

Luban is the third cyclonic storm of the year in the Arabian Sea and is expected to become the first to make landfall in Yemen.

The previous storms made landfall in Oman and Somalia; however, both storms brought impacts to Yemen. Nearly 300 people were killed by the two tropical cyclones.

While Yemen is forecast to endure the worst conditions from Luban, both Oman and Somalia could again undergo impacts.

Luban’s current northwest track will shift to the west by midweek, taking the powerful cyclone between Socotra and the Yemen coastline.

This would bring the risk for life-threatening flooding and mudslides from Sadah to Salalah and Dhalkut. Conditions will improve by Sunday as Luban tracks westward toward Yemen.

Prior to reaching Yemen, Luban will pass near or north of Socotra, bringing strong winds and heavy rainfall to the island.

The slow movement of Luban could result in downpours affecting the island from Thursday into Saturday and bring a risk for flooding, mudslides and locally damaging winds.

Impacts across Yemen are not expected until at least Friday night; however, the entire southern coastline could be lashed by the storm as it tracks westward through the weekend and into early next week.

Torrential downpours can produce life-threatening flooding and mudslides while powerful winds will elevate the risk for power outages and property damage.

Impacts to Somalia will be highly dependent on the track of Luban. If Luban tracks farther north and makes landfall in eastern Yemen, there will be little or no impacts for Somalia.

However, if the storm turns more sharply to the west or even west-southwest, much of Somalia’s northern coastline can endure downpours and gusty winds from Saturday into early next week.

Anyone living in these areas should plan now for potential impacts or evacuations from Luban.