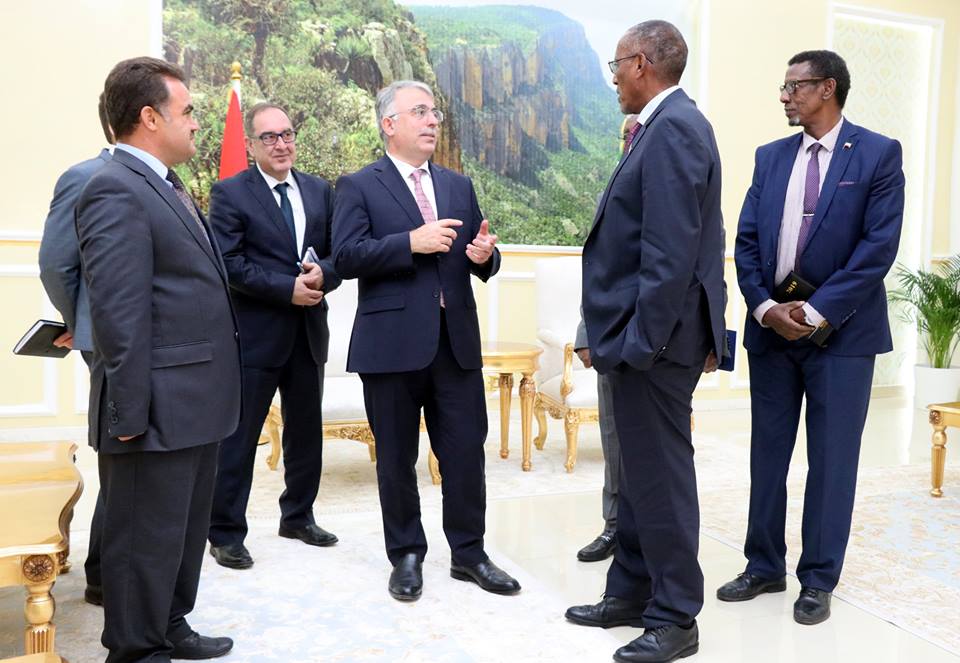 His Excellency the Ambassador, Somalia/Somaliland, arrived to hold talks with the Somaliland government on a number of issues instrumental to a positive revival of the two countries’ somewhat dampened relations.

According to official sources, the meeting between the President and Ambassador Yilmaz established that strengthening cooperation crucial areas such as education, health, infrastructure and humanitarian assistance to the more vulnerable sections of the society was imperative to both sides.

The President, particularly, emphasized that lumping scholarships offered to Somalis on a package administered and dispensed with at will by Villa Somalia was neither desirable nor palatable to Somaliland since the two Somali neighbors had, in reality, nothing to do with one another.

On his part, Ambassador Yilmaz disclosed that his country will, naturally, deal with Somaliland as it is and would certainly reassess its development approach to the country.

Turkey has played a pivotal role in the Somalia-Somaliland talks which has petered off in recent years as Somaliland became more disgruntled with a Turkey that seemed to revel in openly and overtly cozying up to rival Somalia, thus compromising its partiality. In an attempt to change that image, Turkey appointed a former Ambassador to Somalia/Somaliland, Olgan Bekar, as its special envoy to the talks.

Closely following the high profile visit of the British delegation of Minister Gavin Williamson, Defence, to the country, the Turkish appearance right on their heels is another sign of how important to the geopolitical power play in the region and the world Somaliland figures – at present. Credible rumors abound that both of Russia and the United Kingdom have approached the government of Somalia for space to establish military and naval bases. Which the Republic of Somaliland will go is not yet clear although many tip the scales in favor of the latter.

The Somaliland Republic is not – had never been – a colony of ‘Somalia’ as the international community intimates in some of its dealings with the two countries.