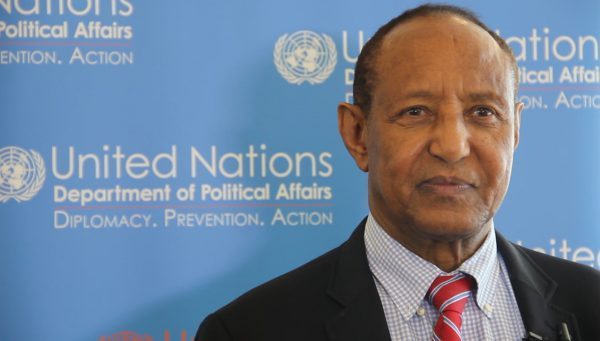 According to our sources at the Villa Somalia, the former representative of the United Nations to the African Union, the Eritrean diplomat Haile Menkerios, was unable to meet the Somalian president Mohamed Abdullahi Mohamed Farmajo in late November, or indeed set foot on Somalian soil.

His intention had been to offer his services in the mediation process between the Somalian government and the Islamist fundamentalist movement Al-Shabaab.

However, the Somalian authorities have been informed by Asmara that Issayas Afeworki views Haile Mekerios as a highly critical opponent of the Eritrean government. Although Issayas Afeworki and Haile Menkerios fought side by side against Ethiopia in the war of liberation, and after independence Haile Menkerios became his country’s first ambassador in Addis Ababa and then in New York, he ended up falling out with his president.

Indeed, he is now persona non grata in Eritrea and in effect finds himself in exile. Although no longer ambassador, he continues to live in Addis Ababa.

The Somalian federal government has therefore decided to bar him from its soil for fear of undermining its new relationship with Eritrea (ION 1481).

The government was in any case doubtful that Haile Menkerios would be accepted as a mediator by Al-Shabaab, as he is perceived as having ties with the United Nations and hence, from Al-Shabaab’s perspective, with Western powers, rendering him untrustworthy in their eyes.