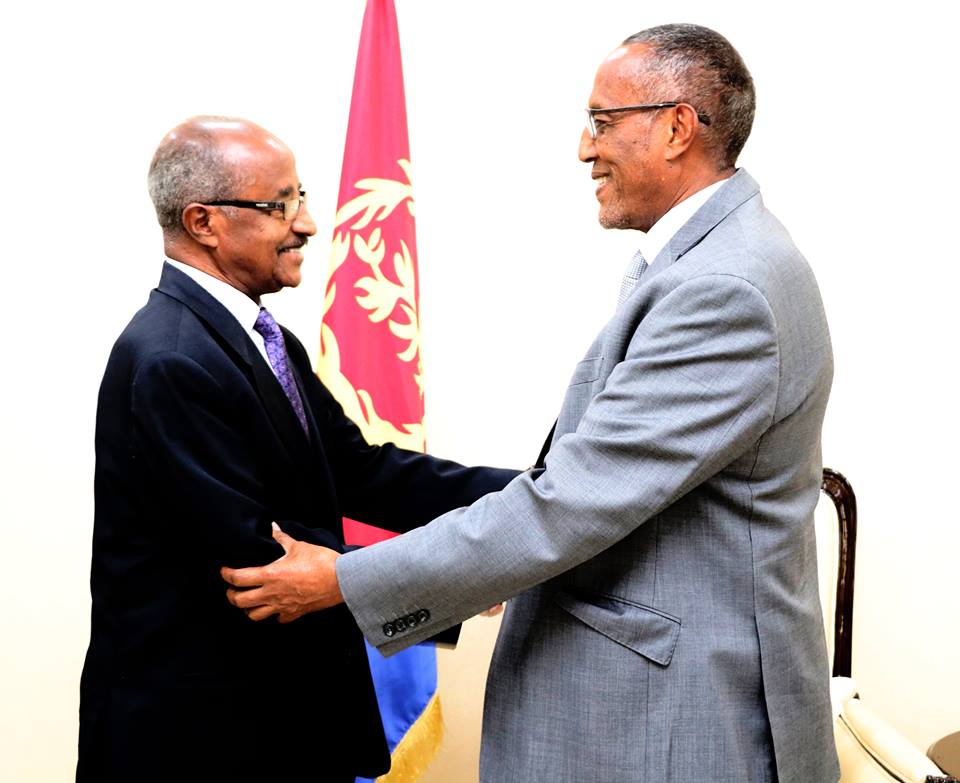 The Vice President was accompanied at the reception by the Somaliland Ministers for Foreign Affairs and International Cooperation and Finance, Yassin Haji Mohamoud ‘Faraton’ and Sa’ad Ali Shire, respectively.

After a brief stop at the VIP lounge at the airport, the delegation was led to the Somaliland Presidential palace, where President Musa Bihi Abdi, received its members warmly.

The two sides discussed a number of issues, central to which is how best to boost inclusive regional cooperation that benefited all members equally.

“The high-level Eritrean delegation came to strengthen regional relations, especially that between the two countries of Somaliland and Eritrea. We have this among others during the meeting the President held with the delegation, and we have established a connection that can be the beginning of a strong collaborative bond between the two Horn of Africa nations and the region, at large,” said Minister Yassin Haji Mohamoud, speaking to the press after the meeting with the President was concluded.

“This delegation was sent by our President, Isaias Afeworki, to assess the situation in Somaliland. we have been absent from the situation in the Horn of Africa for the past twenty years,” Osman Salah, Eritrea Foreign Minister said, also, speaking to the press alongside the Somaliland minister.

Mr. Osman explained that Eritrea, during those 20 years, first faced a war waged it by the former TPLF regime, which was followed by international sanctions.

“Now peace has prevailed in the Horn of Africa, especially between Eritrea and Ethiopia,” he said.

Mr. Osman added that this was the most opportune time to expand regional cooperation and interact with nations in the Horn of Africa and that to assess Somaliland as an active actor of the Horn was quite important.

Mr. Osman said they had been adequately briefed by President Bihi on the political outlook, and socio-economic status of.the country, and that they will convey it – and what else they absorb during their stay – back to President Afeworki.

The delegation will stay and move around for several days to accomplish its mission.

Several regional initiatives binding together the Horn of Africa countries bordering the Red Sea have begun. Eritrea and Djibouti mended fences – somewhat and are working on a final settlement to their years-old differences. Likewise, Eritrea and Ethiopia have taken their relationship to dizzying heights, sweeping in Somalia’s President into a euphoric vision which looks for a joint economic bloc to take root in the Horn.

Since Somaliland is not part of Somalia, it is another actor that cannot be left out to accommodate the meaningless claims a Villa Somalia that cannot even govern its own backyard.

“Somaliland has built a more democratic mode of governance from the bottom up with virtually no foreign assistance to create the most democratic political system in the Horn of Africa with viable electoral and legislative systems as well as a robust private sector dominated economy unlike neighboring authoritarian governments including from the country where today’s delegate come from, Eritrea”.

Today’s delegation was the first of its kind between the two countries and has hallmarks which portend well not only for the two nations but the whole geo-strategic balances of the region.