Middle Eastern governments have forged alliances with right-wing groups in the West dedicated to anti-Islam bigotry.

In 2017, at a public panel in Riyadh, the foreign minister of the United Arab Emirates, Sheikh Abdullah bin Zayed, issued a warning about Islamists in Europe. “There will come a day that we will see far more radical extremists and terrorists coming out of Europe because of lack of decision-making, trying to be politically correct, or assuming that they know the Middle East, and they know Islam, and they know the others far better than we do,” Zayed said. “I’m sorry, but that’s pure ignorance.” The message was clear: European leaders would face a future endemic of Islamic extremism if they continued to tolerate the presence of what he described as radical extremists and terrorists in the name of human rights, freedom of expression, and democracy.

Although the statement is two years old, a clip was recently circulated by a prominent Emirati on social media, Hassan Sajwani, in an entirely different context: in the wake of the terrorist attack allegedly carried out by an Australian white supremacist against Muslim worshipers in two mosques in Christchurch, New Zealand, that led to 50 deaths. Sajwani, who has family links to both the Emirati government and the Trump family (his uncle is the founder and chairman of Damac Properties, which developed the Trump International Golf Club in Dubai), then posted tweets that echo the type of fear-mongering and dog-whistle attacks on Muslims that have been widely credited with inspiring the Christchurch attacks.

It’s just one example of an often-overlooked trend: the culpability of Arab and Muslim governments in fueling anti-Muslim hate as part of their campaigns to fight dissent at home and abroad. By trying to justify repression and appease Western audiences, some of these regimes and their supporters have forged an informal alliance with conservative and right-wing groups and figures in the West dedicated to advancing anti-Islamic bigotry.

Arab regimes spend millions of dollars on think tanks, academic institutions, and lobbying firms in part to shape the thinking in Western capitals about domestic political activists opposed to their rule, many of whom happen to be religious. The field of counterextremism has been the ideal front for the regional governments’ preferred narrative: They elicit sympathy from the West by claiming to also suffer from the perfidies of radical jihadis and offer to work together to stem the ideological roots of the Islamist threat.

Based on dozens of conversations conducted over several years, we found that autocratic regimes in the region carefully cultivate conservative and far-right circles in the West that they believe lean toward their own anti-Islamist agendas. The two sides’ political goals don’t completely overlap: Western Islamophobia can be far more vehement and sweeping than the variety supported by Arab governments. Nevertheless, both sides find the partnership beneficial. Arab propagandists claim there is an inherent connection between so-called political correctness and a tendency to downplay ideologies that lead to terrorism—claims that are seized on by Western conservatives to legitimize their own arguments. “Our threshold is quite low when we talk about extremism,” the Emirati foreign minister told Fox News a month after the 2017 panel discussion in Riyadh. “We cannot accept incitement or funding. For many countries, the definition of terror is that you have to carry a weapon or terrorize people. For us, it’s far beyond that.”

Such campaigns by Arab governments go beyond an effort to simply explain the precise threats posed by Islamists—which do indeed exist. Instead, they often involve scare tactics to play up the threat and create an atmosphere in which an alternative to these regimes becomes unthinkable from a Western policy standpoint. Such an environment also enables these regimes to clamp down on dissent at home with impunity. Terrorism becomes a catchall term to justify repression. In Saudi Arabia, even atheists are defined as terrorists under existing anti-terrorism laws.

These patterns played out for more than a decade but intensified in recent years, and they proved to be effective instruments to win friends and influence enemies.

David Duke, the former Ku Klux Klan leader who visited Damascus in 2005 to show solidarity with the Syrian regime against Zionism and imperialism, frequently expressed support for Syrian President Bashar al-Assad despite the dictator’s vicious campaign against his own people. In a 2017 tweet, he wrote, “Assad is a modern day hero standing up to demonic forces seeking to destroy his people and nation – GOD BLESS ASSAD!” Similar Assad-friendly sentiments have been expressed by far-right figures in Europe.

In August 2015, the prominent and influential Dubai businessman Mohammed al-Habtoor published an eyebrow-raising opinion piece in The National, an English-language daily in the UAE, explaining his support for the then controversial presidential candidate Donald Trump, describing him as a “a strategist with a shrewd business mind” despite his incendiary remarks about Muslims. The support from Habtoor, who is close to the Emirati government, suggested that these governments, or figures close to them, were happy to strike alliances with anti-Islam activists in the West—not in spite of their rhetoric, but because of it. In an answer to a question about Trump’s anti-Muslim remarks, he later told Bloomberg that those were “political talk,” and “talk is cheap.”

As these regimes face more pressure, they deploy fears of extremism and terrorism to garner support. For example, as European countries increasingly became critical of Saudi Arabia last year after the growing casualties in the Yemen war, the imprisonment of women activists, and the murder of the Washington Post columnist Jamal Khashoggi, Riyadh turned to the right wing for support. Among other efforts, a delegation of Saudi women was dispatched to meet with the far-right bloc of the European Parliament. According to Eldar Mamedov, an advisor to the European Parliament’s social democrats, Saudi Arabia subsequently became a divisive issue in Brussels, as left-of-center forces pushed for resolutions against the kingdom while right-wing forces opposed them.

After the military coup in Egypt in 2013, the regime in Cairo and its regional backers were in full gear to exaggerate the risks of extremism and promote Gen. Abdel Fattah al-Sisi as the strongman who was willing to take on not just the extremists but also Islamic thought. A statement he made in 2015 about the need for an Islamic reformation to review, and presumably discard, centuries-old Islamic traditions became heavily cited by his defenders in Washington and other capitals as evidence of his anti-Islamist credentials.

The region’s genocidal wars are over—but bigots from across the West still flock there for inspiration.er

The rise of Mohammed bin Salman, the Saudi crown prince, was framed by regional governments in similar terms. In leaked emails published in 2017, the Emirati ambassador to the United States summed up this propaganda in response to complaints about the continued emergence of jihadis from the region: “Look, I’ll be the first to admit that this ideology is a problem and its problem that needs to be dealt with. But we’re finally seeing someone in saudi willing to address it. Thats a first for us.” The Qatar crisis in 2017 was similarly depicted as part of an Emirati and Saudi effort to uproot extremists and their funders, which was briefly endorsed by Trump, who had just concluded a historic visit to Riyadh.

These regimes intentionally push propaganda about political and religious activists from their countries now living in the West to marginalize and silence them in their new homes. Many of these individuals fled repression and sought protection in democracies; labeling them as religious or stealth jihadis makes it easier to discredit their anti-regime activism. The rise of powerful Western Muslim activists and politicians adds to these regimes’ anxiety about their own domestic stability.

The role of foreign countries in fueling the cycle of prejudice and xenophobia deserves to be an urgent area of focus. Contrary to what Habtoor said about Trump’s anti-Muslim rhetoric, talk is not cheap. As events in New Zealand have shown, talk can cost innocent lives.

Ola Salem is a British-Egyptian journalist with a decade of experience covering the Middle East. She is currently an MS candidate at New York University.
Twitter: @Ola_Salem

Hassan Hassan is the director of the Non-State Actors in Fragile Environments Program at the Center for Global Policy and a co-author of ISIS: Inside the Army of Terror. Follow him on Twitter at: @hxhassan. 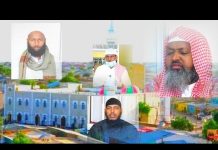