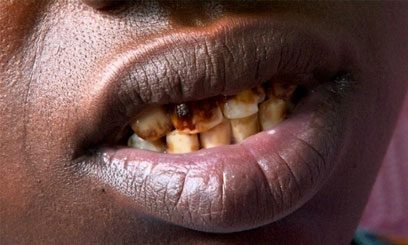 Back in 2013, the International Organization for Migration (IOM) hired me from Baltimore, Maryland, USA and posted me to Hargeisa to help the Somaliland Ministry of Water Resources there in its pursuit of establishing a trained work force. It was part of the Ministry’s plans and policy that a force was to be created and that would eventually take over its water program of monitoring water quality and accordingly combating all issues related including hygiene, sanitation and water-borne disease, etc.

While working there, one day, Dr. X, a Finnish Somali medical doctor (dentist) hitherto unknown to me visited the Ministry and was introduced to me. The intention of his visit was to report a major problem that his Clinic faced in Burao, Togdheer. According to him, in his findings, results of most of the diagnoses of his patients were alarming. For instance, “all people were losing their teeth at a disturbing rate and the young generation was the majority who took the brunt of the problem”, he said!

Therefore, for Dr. X, it was heart breaking to see a young child lose his/her teeth and hence lose his/her God given smile and teeth forever. For him therefore, it would be a sin to ignore and just keep collecting his money. Additionally, to him it would be opportunism if he kept making plenty of money and caring the least. On the contrary, he said he should help and find the cause of the problem even though he knew his business would lose. (in fact, his business there failed that he moved to Hageisa). “If it happens, that was fine because he would rather help,” he said.

Friends, for most, having that kind of high demand business would be a great chance to prosper and an opportunity of a lifetime; Friends, in today’s world:

Objectively, no one would! On the contrary, today, many can even slaughter you for a few bucks. In fact, all the bombings, clashes, crimes and other problems endemic across the globe have indeed something to do with moneymaking and wealth pursuit!

My dear friends, let me come to the point/story. Did you know that discoloration of your teeth or the cause of their brittleness is called dental fluorosis and is caused by fluoride, a mineral that naturally occurs in the soil and like any other that may dissolve in water?  Did you know that fluorosis is a dental or skeletal disease?  And due to its impact on human health, the drinking water industry regulates it in developed countries. In fact, according to WHO, which allows the highest permissible level of that mineral in your drinking water, there should be no more than 1.5 milligrams per liter in your water.

My dear readers, fluorides if and when present in your water in high to moderate levels, they cause the  brown  discoloration that you see on your teeth (dabar); But when higher, they make your teeth brittle too soft that they break off easily; and if even higher, your bones cannot hold you anymore. Instead, you crumble or may become disfigured forever, unable to stand up!

How Does That Happen?

Fluoride is a naturally occurring element in the soil and can be absorbed by plants through the roots. Some can end up in our body from the water you drink or from the food you eat.  However, if you ingest too much fluoride, it builds up in your bones making the density of your bones too high. Normally, our bones are made of a protein called collagen, and it is the collagen that gives them strength. However, collagen has low density and withstands pressure and weight. That means your total body weight remains low so you are comfortably mobile. Fortunately, in the waters we tested, as we found later, fluoride is very high but not extremely high to disfigure anyone. However, the quantity in there are too enough to make people lose their teeth or cause discoloration depending how you much one ingests. But don’t you forget that fluorides accumulate in your body and remain in it for years increasing year after year.

On the other hand, my dear friends, has anyone ever examined the weight of an old but very dry bone? If you did, you found that it is too light and makes metallic luster (reverberations) if you hit it with your nails or metal.

Now, let me take you back to Dr. X’s visit of the Ministry. The selflessness of Dr. X impressed everybody there and interestingly, the more we listened his story, the more Ministry management was interested. Unfortunately, there were no resources to support till completion.

Amazingly, Dr. X came up with offer. He said that he could help by:

“I can take Ministry water quality expert in my car and I can cover his accommodation for the time we are there; additionally, I can help collect the samples and I can also give all supplies… distilled water, gloves, cleaning items, etc… Please just support us with your test instruments, glassware, reagents, etc.!” and the ministry did!

Friends, would anyone refuse to participate in this noble work? I, for one, could not and would not. On the contrary, without reservation, I accepted to go with Dr. X and we took his land cruiser heading for Burao by the next day.

Our journey was pleasant and despite time, and environmental degradation, the road to Sheikh remained familiar as I went to school there when I was a boy. Finally, we were in Burao by 5:00pm and settled in Dr X’s villa.

The next morning Dr. X and I went to the Ministry’s Regional office and met its staff who helped us collect samples from different wells in total, eight (8). Then samples were tested specifically for fluorides. This was continued for two days and results are as shown and at different times.

Typical results of Dr. X’s dental X-Rays of his patients are here for you to see live!

Typical medical results obtained from archives of the clinic

My dear readers, you may note that progression and severity of fluorosis here is from left to right; where that of the far right is the highest and accordingly the worst! …(1 mg/L means 1 part in every one million) and a milligram is 1 part is 1000th of a gram; …1/1000)

That means Well#1 for instance has 6.85 mg per liter of water….which is too high for human consumption…. Very unsafe for people to use without treatment!

Fluoride is a toxic substance, same as lead or arsenic, that can cause many health problems. The first side effect of being overexposed to fluoride is usually colored, brown or yellow teeth.Fluoride can also promote damage to the bones, making them more brittle and increase the chances of arthritis and osteoporosis. Scientific research also indicates that fluoride reduces the IQ of kids!

Additionally, fluoride accumulates in the body. Nearly 50% of fluoride that you ingest daily gets accumulated in your bones and over time can lead to fluoride poisoning symptoms such as arthritis or joint pains.  On the other hand, more than 23 studies carried out in USA show that even moderate exposure to fluoride lowers the IQ of children. When high doses of fluoride wreak havoc on bone tissues causing bone fracture….more than 4mg/L increase bone fracture. Millions of people worldwide suffer from skeletal fluorosis.

In this Study in Burao, however, since results are for only few times, I would recommended more tests to be carried out and in different seasons to come up with a fairly conclusive results.