Home International Conflict/Crime This is how easily the U.S. and Iran could blunder into war 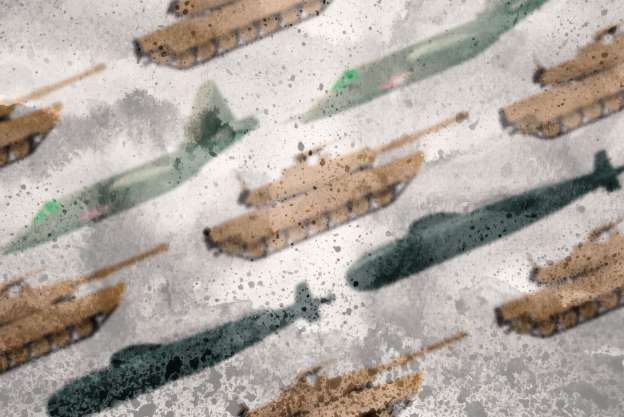 As tensions mount between the United States and Iran, American and Iranian leaders publicly insist they want to avoid war. Yet history is littered with accidents, misperceptions, miscalculations, hidden bureaucratic agendas and other factors that produced armed conflicts nobody seemed to want. This is one hypothetical example of how easily a war between the United States and Iran could start.

On Aug. 7, 2019, Qasem Soleimani, the commander of the Revolutionary Guard Corps Quds Force, rushed out of an emergency session of Iran’s Supreme National Security Council. The meeting discussed how to respond to news that Iran’s oil sales — the lifeblood of the Islamic republic’s economy — had plummeted to only a few hundred thousand barrels a day, down more than 2 million barrels in just 18 months, because of U.S. sanctions.

Soleimani had a few important calls to make. The first two went to the commanders of Asaib Ahl al-Haq and Kataib Hezbollah, the most prominent Iranian-backed Shiite militias in Iraq. Since the defeat of the Islamic State’s territorial “caliphate,” these militants had been itching to turn their sights on the 5,000 U.S. troops who remained in Iraq, with the goal of driving them out. Soleimani had cautioned patience, but his guidance now took a decisive turn: “Brothers, you have my authorization. Follow the righteous path.”

Soleimani’s next call was to Hasan Nasrallah, the leader of Lebanese Hezbollah, the most capable Iranian proxy in the Middle East. Despite hundreds of Israeli strikes in recent years against Hezbollah arms shipments and Iranian bases in Syria, the organization and its backers in Tehran had not yet waged an all-out war across Israel’s northern frontier. Still, everyone knew that such a conflict was inevitable at some point, and Soleimani told Nasrallah that the time might be approaching. “The American-Zionist alliance is plotting and a storm is coming,” he said. “Be ready.”

Within hours, other attacks followed, including a barrage of rocket and mortar fire on the U.S. Embassy in Baghdad that destroyed the main dining hall and killed five Iraqis cleaning the grounds. At the same time, a suicide attacker hit a U.S. military unit operating in eastern Syria, near the Iraqi border. Two American Special Operations troops were killed, and two more were taken hostage by a Syrian militia widely believed to be backed by Iran.

and connections to the international banking system deepened the siege mentality in Tehran. The U.S. decision to designate the Revolutionary Guard Corps as a terrorist organization, overruling warnings from the Pentagon, made the situation even tenser. Iran responded by restarting some proscribed nuclear activities and carrying out calibrated provocations in May, hoping to reciprocate U.S. pressure and build leverage in the event that negotiations with the Great Satan ever resumed.

In June and July, there were more incidents of sabotage targeting ships across the Persian Gulf. Meanwhile, Iranian-backed Houthis in Yemen stepped up their attacks on Saudi Arabia, firing missiles at oil facilities and attacking Saudi oil tankers on their way to Europe. Then, in late July, Saudi Aramco — the national oil and gas company — suffered a devastating cyberattack, shutting down its operations for nearly a week.

Stepping back from the nuclear accord, Iran also began accumulating higher-than-allowed levels of heavy water and low-enriched uranium. By late July, after European negotiators failed to salvage the deal, Iran had reinstalled centrifuges at its deeply buried Fordow facility, threatening to resume enrichment. Soon, Western intelligence agencies estimated that it would take less than a year for Iran to produce the explosive fuel for a single nuclear device, eroding the delays in “break-out time” that the nuclear accord had brought. This prompted Israeli and American threats to take military action if Iran got too close to acquiring the bomb.

So the region was already on a knife’s edge when news of the August attacks in Iraq and Syria reached the White House. Predictably, Trump lashed out on Twitter: “We will respond to Iran’s acts of Aggression and there will be even more Hell to pay if our Brave Soldiers are not returned immediately. The demented and decaying regime in Tehran will feel Power and Wrath the likes of which the world has never seen.” Ayatollah Ali Khamenei responded with his own tweet: “The great Iranian nation will not be intimidated by a corrupt and criminal superpower spreading lies and beating the drums of war. The world knows Iran is in the right and all should be certain of America’s defeat.”

It was unclear exactly what Trump’s threats implied. But the president found himself under increasing pressure from Republican hawks in Congress and hard-liners within his administration to take immediate military action.

Trump worried about what this would mean for his reelection prospects. He had campaigned against further interventions in the Middle East. But he had also spent years trashing Obama’s “horrible” nuclear deal, and he had repeatedly promised to use “great force” in response to Iranian attacks. Ultimately, Trump feared that looking weak would do him more harm in 2020 than risking further escalation.

So having sent one aircraft carrier to the Persian Gulf in May, Trump agreed to deploy a second carrier , along with additional squadrons of aircraft. U.S.-based strategic bombers were placed on high alert. Trump also authorized unilateral raids in Baghdad against an Asaib Ahl al-Haq bombmaking cell and a Kataib Hezbollah rocket team. Mysterious explosions were reported at several munitions depots and training camps inside Iran, near the Iraqi border, and ATMs across Iran suddenly ceased functioning for two days. While no one claimed credit, Iranian and international media outlets suggested that the CIA and the Mossad were responsible.

Tensions finally boiled over in the Strait of Hormuz, the narrow passageway in the Persian Gulf through which 20 percent of the world’s tradable oil passes. Several Iranian fast-attack craft swarmed nearby U.S. naval vessels. When the Iranian boats ignored U.S. warnings, an American destroyer fired on them, killing everyone aboard Iran’s vessels.

Fearing that this was the first skirmish in a wider naval war, Iran began dispersing its mines, anti-ship cruise missiles and mobile ballistic missiles, lest they be struck by U.S. bombers. The Pentagon’s proposed response was a large-scale preemptive strike to neutralize the weapons before they posed a significant threat to U.S. forces, bases, allies and shipping. National security adviser John Bolton and Secretary of State Mike Pompeo also urged Trump to hit Iran’s nuclear program at the same time (something Israeli Prime Minister Benjamin Netanyahu, during numerous calls to Trump, agitated for as well). Pompeo assured the president that he did not require additional congressional authorization beyond that provided after 9/11 to launch such an attack, given alleged links between Iran and al-Qaeda.

Within days, the United States unleashed a multi-day bombardment of Iranian air and coastal defense systems, mine storage facilities, ports, and ballistic missile locations, as well as strikes on the Natanz and Fordow uranium enrichment plants, the uranium conversion facility at Isfahan, the Arak reactor, and several Revolutionary Guard bases where the administration alleged (with no clear evidence) that suspicious nuclear-related research was being conducted. Coordinated cyberattacks — believed to originate from Israel and the United States — struck Iran’s electrical grid.

The Islamic republic responded by dropping hundreds of surviving mines into the Strait of Hormuz, terrorizing oil shipping with suicide boats and kamikaze drones, and targeting U.S. military facilities in Bahrain, Kuwait and the United Arab Emirates with missiles. Meanwhile, Houthi attacks on Saudi territory escalated.

As the battle unfolded, American overmatch soon produced significant tactical successes. Iran’s nuclear program was set back at least two years, its air and coastal defenses lay in ruins, and much of its navy was sunk to the bottom of the sea. Yet global stock markets panicked as oil prices spiked and fears of an all-out regional war grew.

The Iranian regime, defiant and far from defeated, announced its formal withdrawal from the nuclear Non-Proliferation Treaty. “Having been attacked by a nuclear aggressor,” President Hassan Rouhani declared, “Iran has no choice but to pursue all necessary capabilities to deter the enemy.”

Determined to “restore deterrence” and show that its homeland could not be struck with impunity, Iran also directed Lebanese Hezbollah to unleash tens of thousands of rockets and precision-guided missiles against Israel, overwhelming missile defenses and striking civilian targets in Tel Aviv and other cities. Simultaneously, Hezbollah and Iranian forces launched attacks from Syrian territory, opening a second front against Israel. Hundreds died, and Israel’s economy stood paralyzed.

Israel responded with massive force, not just bombarding southern Lebanon but also saturating Hezbollah and government targets in Beirut, killing or wounding thousands of civilians. Israel’s air force struck Iranian and Hezbollah targets in Syria, as well, while Israeli ground forces prepped for a large-scale land incursion to clear out Hezbollah strongholds in Lebanon and establish a buffer zone in Syria across the Golan Heights.

As the bloodshed mounted, the Trump administration defended Israel’s right to use all means to protect itself, while a horrified world called for calm.

Nothing seemed to be enough to end the cycle of carnage.

Iran and its proxies drew more Israeli and American blood — and vice versa — and oil prices surged even higher, risking a U.S. recession. The voices calling on Trump to come to Israel’s aid and finish off the Iranian regime once and for all became an unstoppable crescendo.

As in 1914, at the outset of World War I, events took on a cruel logic of their own, and the Guns of August sounded.

Having invested his credibility and political future in looking tough, Trump seemed to have no choice. A president who had promised to extricate America from endless wars in the Middle East found himself sending more than 100,000 troops back into the desert. Only this time, the United States was invading a country with 80 million people (twice Iraq’s population), a territory 68 percent larger than Iraq and Afghanistan combined, and with hundreds of thousands of the best paramilitary troops in the world.

Asked at an impromptu news conference about the deployment, Trump simply said, “I warned Iran that if they chose to fight, we would end them.” It was a war that neither Trump nor Iranian leaders wanted — and yet, at each critical moment, escalation seemed like the only way to defend vital national interests and respond to political imperatives. Circumstances had simply become too combustible. And once the fuse was lit, no one could stop the explosion.