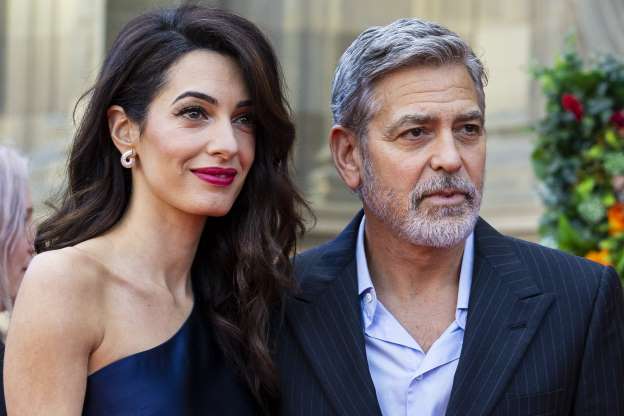 As Amal Clooney brings charges against the Islamic State to the French courts, her husband, George Clooney, is opening up about the frequent security risks they face with their two children, one-year-old twins Alexander and Ella.

“My wife is taking the first case against ISIS to court, so we have plenty of issues – real, proper security issues – that we have to deal with on a fairly daily basis,” Clooney, a human-rights activist in his own right, told The Hollywood Reporter on this week’s Awards Chatter podcast.  “We don’t really want our kids to be targets, so we have to pay attention to that.”

Clooney, who married Amal, a human-rights attorney in 2014, added that he lives “a pretty good life. I have a beautiful wife and two beautiful kids. … (but) there are things you miss. I miss being able to walk with our kids in Central Park.”

ISIS, a network of Islamic militants that incubated during the Iraq war and the civil war in neighboring Syria, later occupied territory in those countries and forced local women and girls into marriage or sexual slavery.

Based on interviews with Yazidi female refugees, Human Rights Watch concluded in 2015 that ISIS had operated a “system of organized rape and sexual assault, sexual slavery, and forced marriage.”

Last month, Amal asked the the United Nation’s Security Council to prosecute Islamic State extremists in Iraq and Syria for rape, arguing that if the U.N.’s most powerful body cannot prevent atrocities of sexual violence from happening in wartime situations “then at least it must punish it” and make justice for victims a priority.

The council passed a German-drafted resolution with a 13-0 vote, with Russia and China abstaining, though its language was watered down to win approval.

It eliminated a section about providing “sexual and reproductive health care” to survivors of rape and abuse to avert a veto from the Trump administration, as well as a positive reference to the International Criminal Court’s work in prosecuting alleged perpetrators of sexual violence in conflict zones.

French Ambassador François Delattre said eliminating the language about survivors’ reproductive healthcare was “unacceptable and undermines the dignity of women.”

He added, “We are worried that the threat of veto was used to question 25 years of advances in this area. It is intolerable and incomprehensible that the Security Council is incapable of acknowledging that these women and girls who suffer from sexual violence in conflict, and who obviously didn’t choose to become pregnant, should have the rights to terminate their pregnancy.”