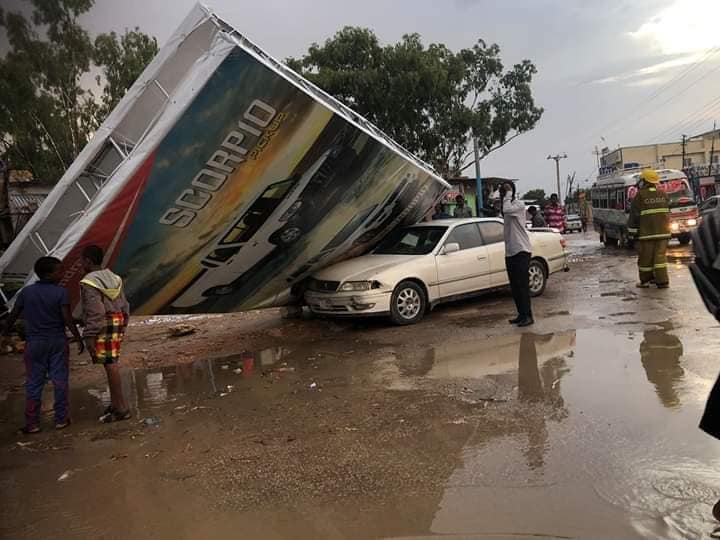 They were short-lived but devastating while they lasted.

As far as Somtribune could gather, about six people are reported dead although not all could be fully confirmed. At least three of them – two men and a woman – died when a wall in a building still under construction by which they were sheltering collapsed on top of them. Bricks and scaffolding killed them. Others were reported electrocuted by power-lines and electrified iron lamp posts, while still others were said to have died when their lean-to homes or business places were torn apart by the killer winds. At least one person, reports state, was swept away by floods.

The government, through a broadcast by President Musa Bihi Abdi,  has fully confirmed three killed, but had not tallied yet the injured or those turned homeless. Neither is the extent of damages the half-an-hour unexpected thunderstorms caused fully assessed yet.

In recent years, similar thunderstorms descended on the capital of the Republic of Somaliland and several other major cities in the years 2007 and 2016.

Pouring rains of similar intensity were reported from the regions. Burao, the provincial capital of Togdheer, witnessed a downpour that was no as devastating as that of Hargeisa, probably because of the difference of terrain and layout of where the two cities lay, respectively.

The video clips and images below from both cities give the reader an idea of how strong the wind-laced rains was: