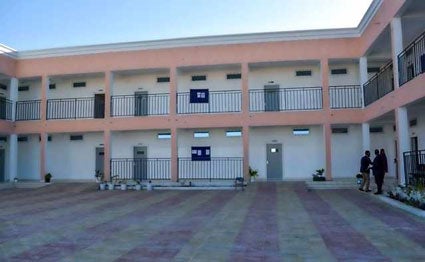 It came disguised as a once-in-a-lifetime job opportunity: a teaching job at a prestigious international school in Hargeisa, Somaliland, with a salary of Sh50,000 a month, free air ticket, work visa, meals and accommodation, and paid tuition outside of lessons.

“That meant I would be saving nearly 100 percent of my salary,” Paul*, a teacher who returned home recently from Hargeisa, says.

It sounded like the opportunity of a lifetime – but when Paul got there, he quickly realised all was not what he had looked forward to. “It’s like a concentration camp,” he says. “You don’t feel like a human being.”

Paul is one of many Kenyan teachers who have been trafficked into Somaliland through unscrupulous recruiters for Elm School, also known as Young Muslim Academy.

The recruiters work in cahoots with corrupt immigration officials in Somaliland to smuggle in Kenyan teachers for exploitative labour.

Paul says he was introduced to the recruiters by a friend. He met an agent of the school in a shabby office on Tom Mboya Street, Nairobi, in October 2018, where all travel arrangements were made at no cost to him.

Interviews with 17 teachers, some of whom returned to Kenya recently and who asked that we conceal their identities for fear of reprisals, reveal multiple allegations of false promises during recruitment, gross underpayment, instant deportations, abuse of labour practices, sexual harassment, inadequate food, substandard accommodation and lack of freedom of movement and association.

“Life is very hard here,” says Arnold*, who is in his second year working at the school. “Too many lies when they are bringing you here. Salaries are deducted unjustifiably and when you ask about it, the HR threatens to terminate your contract.”

Arnold says when he first arrived in Hargeisa he was shocked at the condition of his hall of residence, nicknamed Guantanamo. “The space is crowded and there is no privacy. It feels like a prison sleeping in it.”

Elm Schools Human Resources Director Benson Samia refutes the allegations. “We respect our teachers and their happiness, and comfort is our number one priority.” Regarding claims of abusing labour practices and deporting teachers without notice, he says the school runs like any private business and expects high performance from its staff.

“We are in the business of moulding young minds and don’t condone incompetence or under-performance.”

He adds that he has never received any complaints about sexual harassment. “All the teachers here are adults and I believe anything that happens is consensual,” he says.

Elm opened in 2007 and is popular with Somaliland’s elite and Somali refugee returnees from the United States and Europe. Its promotional videos on social media boast that it is a “centre of excellence, a safe and secure environment that encourages students to realise their full potential”.

The school is owned by a Kenyan, and is the biggest employer of Kenyan teachers in Somaliland, Mr Samia says, with 70 teachers from Kenya and about 40 from Somaliland in its kindergarten, lower and upper primary, and secondary sections. The school’s day-to-day activities are directed by Jibril Ahmed.

But life is very different for the Kenyan men and women who teach the children. Many teachers who spoke to the Nation say school officials usually keep the teachers’ passports, effectively limiting their movement in a foreign land. “When you land in Hargeisa, that is the last time you see your passport,” Paul says.

Another teacher, Simon*, confirms, “They take your passport immediately you arrive in the country and say they are going to apply for employment authorisation, but the work permit never comes.”

Mr Samia denies that the school confiscates passports and that some teachers work illegally. “This is a foreign country. They must have work visas. We give the teachers a one-month entry visa. After it expires, the passport is collected from the teacher and taken to the immigration offices, and sometimes it takes two to three months before the work visa is processed.

However, the Nation has seen a copy of a one-month visitor’s visa issued to a teacher, which barred the holder from working in the country. Despite that, the teacher worked for an entire academic year.

Working ‘under cover’ and living in cramped hostels is not all the teachers endure. They also complain about heavy workloads, inadequate food and mysterious salary deductions.

According to a contract seen by the Nation, the teachers work six days a week. The week begins on Saturday and ends on Thursday. In Somaliland, weekends are Thursday and Friday. But for these teachers, off days were just on paper.

When the Nation contacted Nelson*, a teacher at the school, on a day he was supposed to be off, he informed us that he was in an impromptu day-long meeting.

“The officials regularly call for random meetings so that teachers are not free at any given time,” Nelson told us.

“On an off-day we would be asked to paint chairs or arrange books in the library,” Simon says.

Another former teacher, Jane*, details the surprise salary deductions they are subjected to. “They claimed food and accommodation is free, but deducted Sh10,000 every month from my salary for the same,” she says. “The food is always inadequate and during the weekends we don’t get any at all,” she adds. “We are forced to buy out of our pocket.”

Jane also complains that she was promised a tax-free salary but when she was signing her contract in Hargeisa she discovered six per cent of her gross salary would be deducted from her monthly salary as tax.

The Somaliland representative to Kenya and head of Somaliland’s liaison office, Ambassador Bashe Awil Omar, says his office is not aware of the allegations.

“Somaliland government strictly adheres to the international human rights standards of respect for human rights and their fundamental freedom,” he said. He added that his “government has rules and regulations that will prosecute persons or organisations found to be engaged in such criminal acts.” Ambassador Omar says his government has opened investigations into the claims.

Somaliland broke away from Somalia and declared independence in 1991 following a civil war that led to the collapse of Siad Barre’s government. It enjoys relative peace and stability and has its own functioning polity, judiciary, police force and army. But it is not recognised by Mogadishu or any foreign government.

Many Kenyans travel to Somaliland for work in various sectors every year, but there is no specific data on how many are working in Somaliland.

Early this year, a Kenyan teacher at Elm School was arrested and locked up for six days before he was deported to Kenya. Frustrated with the working conditions, the teacher said he decided to risk it all and return home through Ethiopia.

“He lied to us that he needed his passport to process some payments, then abandoned duty without notice,” Mr Samia says.

The teacher was arrested at Wajale, a border crossing point between Somaliland and Ethiopia, by Somali immigration officers.

He was detained because he did not have a valid visa. With not enough money to bribe the immigration officials as they were demanding, he informed officials at Elm School, who organised for his transfer to a cell in Hargeisa before they facilitated his deportation to Kenya.

Responding to allegations that Elm officials had denied the teachers freedom of association and movement, Mr Samia said the school has imposed a curfew for security reasons. “When there is a security alert from the government we ask the teachers to be home by 7 or 7.30pm. But normally, they are allowed to stay out until 8pm,” Mr Samia said.

Despite these conditions, men and women keep going to Elm School to teach. Arnold says he is hanging onto this job because “it’s hard getting a job back home”.

Would Arnold encourage a Kenyan teacher to go work with him at Elm School? “No way on earth. It is hell up here,” he says.

*Names have been changed to protect the identity of the teachers.

Feature Photo: Elm Secondary School in Hargeisa, Somaliland. A group of Kenyan teachers who work at the school claim that their employer subjects them to labour exploitation. PHOTO | COURTESY