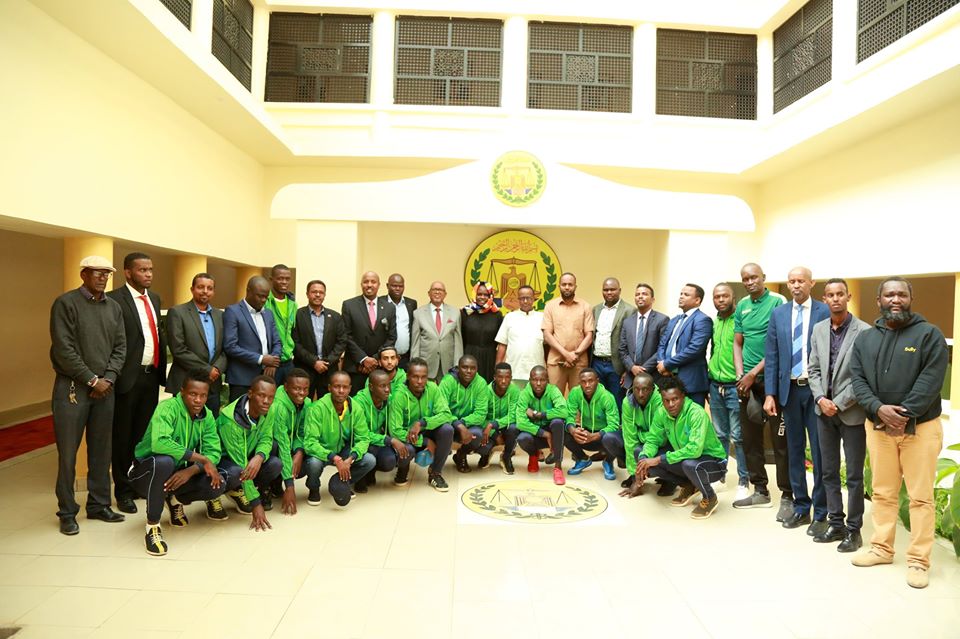 His excellency the Vice President of the Republic of Somaliland, Abdirahman Abdullahi Ismail ‘Zeili’i’, received the visiting Sindo United FC of Kenya today, Tuesday, at his office at the Presidency.

The Vice President warmly thanked the Kenyan side for the brave, historic decision that earned them the friendship of the Somaliland public.

“We thank you for coming to the Republic for friendlies that saw you meet Somaliland teams not only because you have taken this pioneering step but for declaring the matches as support for the country’s overdue diplomatic recognition,” the Vice president.

“Now that you are here,” he said, “the Republic is more of a reality that cannot be confused with Somalia than it was to you before you arrived,” the VP added.

On their side, Bonface Ambani, the coach, and other members expressed their gratitude for the opportunity and for the very warm welcome accorded wherever they went – Hargeisa, Borama, Berbera and all the towns and sights in between.

While in Somaliland, Sindo United played friendlies with First Division teams in the regions of Maroodijeex (Hargeisa), Awdal (Borama), and Sahel (Berbera) with mixed outcomes.

Present at the reception,on the Somaliland side, were the Minister for Sports, Boss Mire Mohamed, the Vice-Minister for Foreign Affairs, Liban Yussuf, the Somaliland Head of Mission Kenya, Bashe Awil and the First Secretary (Deputy Head) Sharma’arke Gheelle, and other top officials.