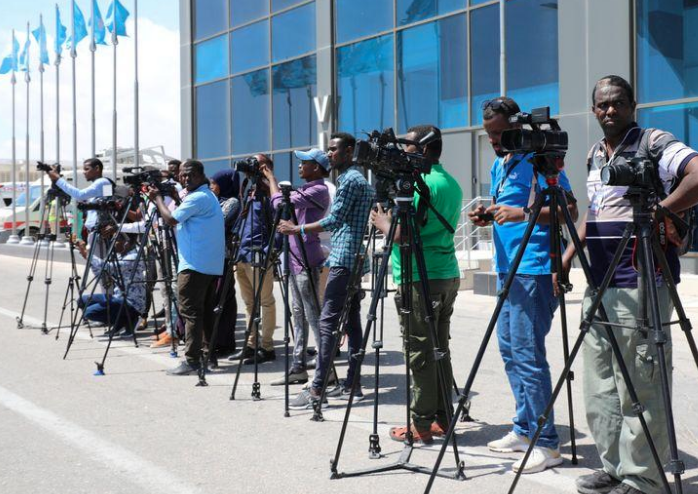 Somalia’s Western-backed government forces beat and detained a record number of journalists last year, the journalists’ syndicate told Reuters on Friday, prompting suggestions the government is suppressing scrutiny of its security record ahead of elections due this year.

For years, the al-Qaeda linked al Shabaab insurgency was accused of killing Somali journalists. Those assassinations have fallen, although two journalists were among those killed in a bombing last year. Now media say they face a new danger: government forces.

State security forces detained an “unprecedented” 38 journalists in Somalia last year, according to data compiled by Abdalle Ahmed Mumin, secretary-general of the Somali Journalists Syndicate. Most were detained while reporting on bombings or insurgent attacks but some were reporting on corruption.

That compares to 16 journalists detained in 2017, 12 in 2016, and six in 2016, the year before dual U.S.-Somali citizen President Mohamed Abdullahi – known by his nickname Farmajo – took power, Mumin said.

“The government is not allowing journalists to report,” he said. Officials rarely release casualty figures from incidents like Saturday’s truck bomb, which killed around 90 people.

In most cases journalists are not charged and are released after hours or days, according to his report, due to be released next week.

Last year, 37 journalists were beaten, shot at or threatened at gunpoint in Somalia, mostly by state security forces, the report said. The figures do not include the breakaway republic of Somaliland.

Somalia’s police spokeswoman, the interior minister and information ministry spokesman did not respond to requests for comment.

“I have no comment,” Prime Minister Hassan Ali Kheyre told Reuters when asked about the crackdown during a visit to Qatar.

There is no public database of attacks and bombings in Somalia. Citizens usually hear about attacks through the media. But while the size of bombings is increasing, journalists say coverage is shrinking.

Farhan Mohamed Hussein, a reporter for privately-owned Radio Kulmiye, said he was arrested three times last year and twice the year before. Once police blindfolded him and beat him with gun butts, he said. Another time, they smashed his camera.

“Many people see you as an enemy when they see you have a camera,” he said. “Reporters are victims of the government which was supposed to work with them … Farmajo’s government is the worst we have ever seen.”

Journalists have been banned from parliament and ignored by spokesmen who simply put out official statements on social media, he said. Mumin confirmed the ban and said the upper legislature is considering a bill to further restrict media freedom.

“Farmajo’s police beat you with gun butts … They openly tell you ‘no covering stories of blasts’,” she said. After she posted news of one bombing on Facebook, police came to her home to arrest her and threatened her family, he said.

In April, the government told privately run Aamin Ambulance, often the only source for casualties from insurgent attacks, to stop releasing numbers of dead and wounded, said the service’s head Dr Abdikadir Aden. They also tried to restrict ambulances from blast sites, he said.

The government did not respond to requests for comment.

Such restrictions make it difficult to judge the government’s security record, said Mumin. This year Somalia is due to hold its first one-person, one-vote elections since the civil war began in 1991. The polls are a milestone in drawing down Somalia’s 21,000-strong African Union peacekeeping force.