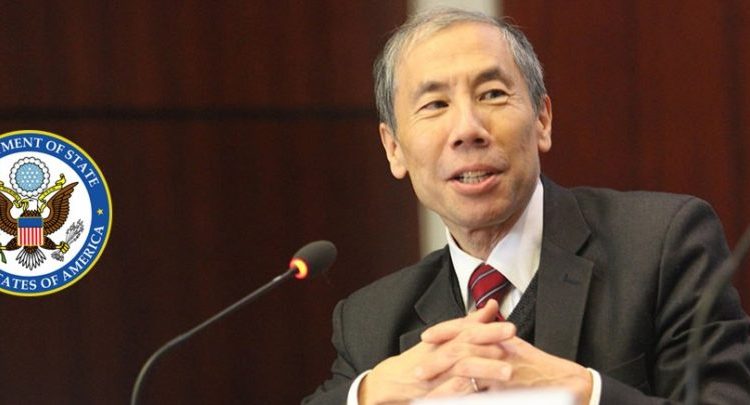 US Ambassador to Somalia Donald Yamamoto is fighting legitimacy fires in Somalia after he endorsed Ahmed Kariye Qoorqoor as the winner of the Galmudug state presidential elections this week.

Yamamotos sin, it appears was to endorse a candidate rivals saw as imposed by the Federal Government of Somalia under President Mohamed Farmaajo. Local Sunni group (Ahlu-Sunnah wal-Jamaah (AWJ) and other contenders had in fact boycotted the polls arguing there was a predetermined candidate.

“Political process in Galmudug is the start of broad-based reconciliation process. Amb Yamamoto calls on everyone to join peaceful dialogue and avoid violence,” Ryan Grizzle, the spokesperson of the US Mission in Somalia said of the vote.

“Congrats to newly elected President Qoorqoor. Now we must focus on number one priority of Somalia; Security.”

Political process in #Galmudug is the start of broad-based reconciliation process. Amb Yamamoto calls on everyone to join peaceful dialogue & avoid violence. Congrats to newly elected Pres @QOORQOORG. Now we must focus on #1 priority of #Somalia=Security https://t.co/qK6ykc2SYo pic.twitter.com/RFgWWWLlsK

Yet this statement has become controversial.

Opposition  leaders opposed to this form of election have said it could unearth a conflict similar to other places in the world.

“What I am seeing happening in Somalia is similar to how Maliki raked Iraq, with the support of the US, which led to the emergence of Daesh,” said Wadajir Party leader Abdirahman Abdishakur, referring to the first post-Saddam Hussein Iraqi Premier Nouri al-Maliki, supported by the US.

If the @US2SOMALIA had recognised the bloody elections in South West State & have today congratulated the crowning of the so-called Galmudug president, then it will be difficult for the Somali people to see the US as an honest partner. This is also a clear indication that 1/1

“Maliki was a polarising figure who rigged elections, turned communities against one another and targeted the opposition.” Abdishakur argued this type of iron-fist rule created Daesh, the alternative name of the terror group Islamic State OF Iraq and Syria (ISIS).

“We still see the bad politics of the US in Somalia, 72 years later, in the way the US government is dealing with people of Somalia especially in Galmudug. It is unjust how Ambassador Yamamoto is supporting a dictatorship in Galmudug,” he wrote on his Facebook page.

“I appeal to the people of Galmudug to hold hands and unite against the bad politics of the US who appear to be fighting the people. We shall defeat them and those who work for them.”

So what is the beef? It all started on February 2 in Dhusamareb, the capital of Galmudug, after a controversial state presidential election saw Qoorqoor elected. Except this was a third type of election meant to elect a local leader here. Groups opposed to this February 02 poll argued there was no legitimacy in the exercise and boycotted.

“Taken together, these actions point to a pattern of undermining the nations federal architecture using taxpayer’s meagre resources to forcefully take over federal member states for the purpose of pre-determining the outcome of federal elections scheduled later this year.”

The FNP says Mogadishu has tried to undermine elections in Jubbaland and South West by imposing own candidates. In fairness, the FGS has argued elections must be within the national laws, even if conducted by local federal state authorities.

But the coalitions beef with Yamamoto was that he supported a candidate whose election others boycotted. “Yamamoto contradicts the core principles of good governance and promotion of democracy that are pillars of US Foreign Policy,” they charged.

To be fair though, the US statement of endorsement was just similar to what regional bloc IGAD, the African Union and China said; congratulating Qoorqoor.

In fact, local Sunni Group, AWJ, and former President Duale Haaf had earlier endorsed the electoral process by taking a share of parliament. AWJ, the moderate Sunni group that once defeated al-Shabaab took a share of 20 MPs in the local legislative assembly. When the group pulled out of elections for President, however, the local parliament still had sufficient numbers to vote.

For the US though, its position in Somalia has always been controversial. And some experts think the move to endorse the election winner could create chaos. Hussein Sheikh-Ali, the founder of Mogadishu think-tank Hiraal Institute and former Counter-terrorism Advisor to Farmaajo said the US comment was tantamount to a “vote for corruption.”

“Good luck with this strategic plunder in Somalia again,” he said sarcastically.

The great The mighty @US2SOMALIA has voted and voted for corruption, destabilisation and tyranny.

Good luck with this strategic plunder in #Somalia again. https://t.co/ZnJLoBOF4I

Mohamed Haji Ingiriis, a Somali academic in the UK said the US continual disregard for local views meant there was an ulterior motive.

“The questions asked by many Somalis here and there are why does the US Embassy in Mogadishu discard concerned Somali scholars and intellectuals for its consultations on Somalia? Does it just want sycophantic local political players who tell the Embassy what it only wants to hear?

The questions asked by many Somalis here and there are why does the US Embassy in Mogadishu discard concerned Somali scholars and intellectuals for its consultations on Somalia? Does it just want sycophantic local political players who tell the Embassy what it only wants to hear?