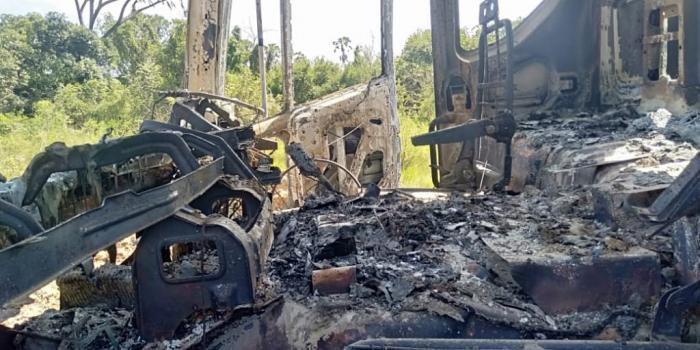 Two road construction vehicles were burnt to a crisp following a suspected Al-Shabaab attack at Milihoi area along the Lamu-Garsen Road, Lamu County, on Sunday, February 9.

County Commissioner Irungu Macharia, confirmed the latest attack, going on to state that the motive was not yet clear.

There were reports of heavy gunfire between the suspects and members of the Kenya Defense Forces at Milihoi area, about 20 km from Mpeketoni Town.

The latest attack comes just a month after the somali-based extremist group attacked the Kenya Navy camp in Manda Bay.

US planes parked at the Manda Airstrip were targeted and blown up using Rocket Propelled Grenades (RPG).

According to an internal Kenyan police report the damaged property included 2 fixed-wing aircrafts, a US Cessna and a Kenyan one, were destroyed in the attack. Two US helicopters and multiple US vehicles also destroyed.

The unprecedented attack at the Kenya Navy camp in Manda Bay in the county saw a US Service member and two Department of Defence contractors killed.

A construction company owned by Chinese nationals working on the Lamu Port suspended its operations following the attack.

The company directed its employees to resume work on Monday, January 13, as the situation at Lamu was still unpredictable at the time.