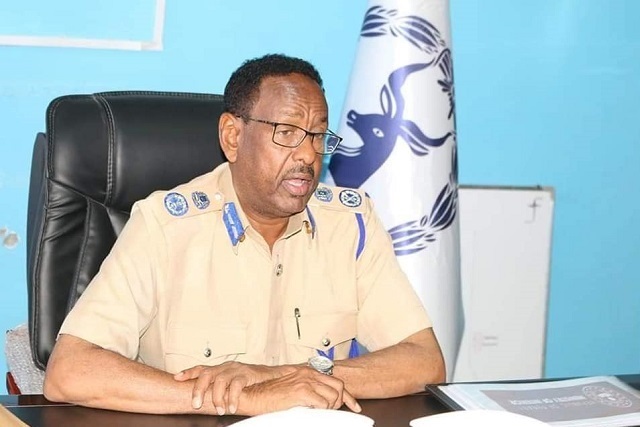 Mogadishu, Somalia (Somtribune) — The Federal Somalia Police Commissioner, Major-General Abdi Hassan Mohamed ‘Hijar’, today, painted a gloomy picture of Somalia gaining on on its enemies, ominously predicting that that security would only get worse if the whole country was not mobilized to counteract growing insecurity issues.

The Commissioner, in the wake of accelerated targeted killings in the city, bombings and the planned vandalism of security cameras in and around main avenues and government institutions, stated that the situation was fast getting out of hand.

“National security is under heavy invasion. It is being relentlessly pummelled and compromised. Threats come from all sides – air and land. Security cameras installed on main avenues are blasted out of service. Engineers rebuilding roads are targeted and bombed,” he stated.

Commissioner Hijar insisted that there was a concerted plan behind the worsening situation, although he did not say by whom.

“It is evident that elements are not desirous of sustained national security. The nation’s equanimity, peace and stability are under threat,” he added.

Commissioner Hijar called on all Somalia citizens to take the matter into their hands and help tighten national security – another bold statement saying the police and other security forces can no longer adequately cover the issue.

The Commissioner, in this unprecedented declaration, virtually sent out the strongest message of despair, appearing that he and his force were surrendering to said, veiled forces.

The statement, coming from the highest authority responsible for national security, trumpets out a blaring panic which said volumes about the potency of the incumbent leadership and the dozens upon dozens of ‘security’ programmes through which the international community has been funnelling down billions of US Dollars to Villa Somalia in order to improve national security.

Analysts have always maintained that there were rings within rings both within and outside government circles in collusion to keep security untenable. Keeping the peace, after all, they maintained, has become a most lucrative business for both national and international organization that everybody was loath to see  – dwindle or – God forbid! – come to an end.

It is not yet known what steps the jet-hopping young, rash leaders of a country which has become the largest graveyard of international aid would take of the issue – and the whistle-blowing Commissioner himself.