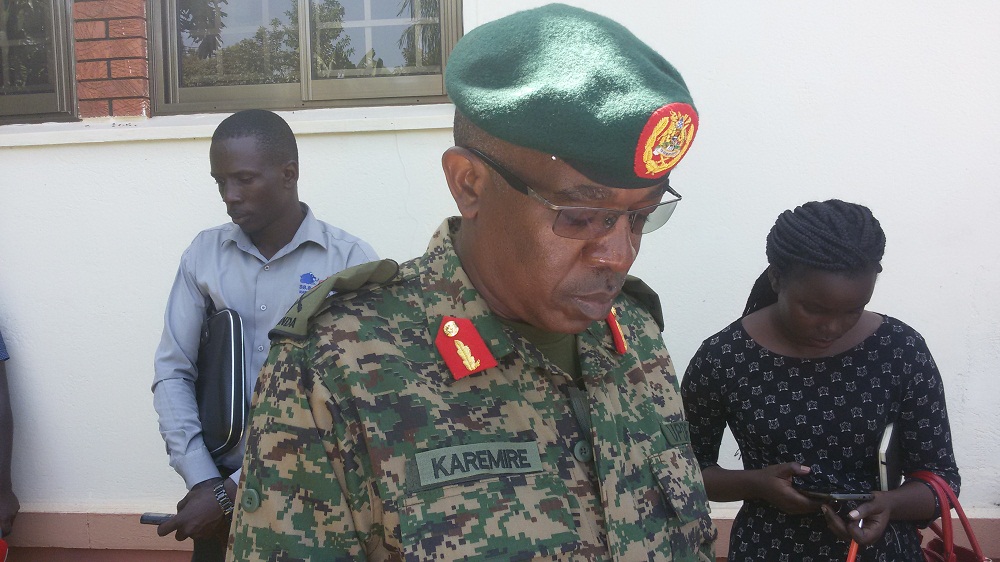 The Uganda People’s Defense Forces (UPDF) has confirmed that over 2000 soldiers have been offered to help in the fight against locusts that invaded the country through the Karamoja region.

The UPDF spokesperson, Brig. Richard Karemire while addressing journalists at the UPDF headquarters in Mbuya, said they will put in whatever they can to address the disaster.

“As UPDF, we have put in the human resource (2000) soldiers, other capabilities at our disposal like the air force which this morning has been airlifting material to the affected areas.

“The Chief of Defense Forces, Gen. David Muhoozi has appointed Major General Sam Kavuma, Deputy Commander Land Forces to be the lead person on the part of UPDF on this national task force and this shows the level of commitment we have towards this matter,” Karemire said.

Gen. David Muhoozi, the Chief of Defense Forces said the task they have ahead is huge and will deploy more soldiers if need be.

“We are collaborating with the Ministry of Agriculture and we have trained 2000 soldiers who will be deployed at the affected areas immediately, the task we have ahead of us is too huge and we will mobilize more if in need,” Muhoozi said.

The government earlier today dispatched 2 aircrafts carrying about 36000 litres of pesticides, pumps and all materials that will be used to spray the locusts.

Deadly desert locusts on Sunday evening entered Uganda through Amudat District, Karamoja region from North West Pokot in Kenya, where they have destroyed thousands of acres of vegetation.

A Desert Locust adult can consume roughly its own weight in fresh food per day, that is about two grams every day.

A very small part of an average swarm (or about one tonne of locusts) eats the same amount of food in one day as about 10 elephants or 25 camels or 2,500 people.

A Desert Locust lives a total of about three to five months although this is extremely variable and depends mostly on weather and ecological conditions.

The life cycle comprises three stages: egg, hopper and adult. Eggs hatch in about two weeks (the range is 10-65 days), hoppers develop in five to six stages over a period of about 30-40 days, and adults mature in about three weeks to nine months but more frequently from two to four months.

Desert Locust females lay eggs in an egg pod primarily in sandy soils at a depth of 10-15 centimetres below the surface.

A solitary female lays about 95-158 eggs whereas a gregarious female lays usually less than 80 eggs in an egg pod.

Females can lay at least three times in their lifetime usually at intervals of about 6-11 days. Up to 1,000 egg pods have been found in one square metre.