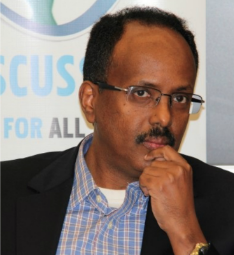 The sudden policy change of the International Community in abandoning the support of democratic system of governance for building the Federal Republic of Somalia (FRS) and opting for the support of an authoritarian system of governance has enabled President Farmajo to disregard the rule of law and to conduct bogus elections in Hirshabelle, Southwest, and Galmudug States to install loyalists, to personalize the security and judiciary apparatus, and to engage sustained campaign of destabilization against Puntland and Jubbaland states, all for the purpose of paving the way for his stay in power after February 8, 2021.

Despite palpable public discontent, President Farmajo didn’t hide his delight for the political manipulations he pursued in the past three years to hold on power for more years to come in any way necessary. He bullishly declared in Addis Ababa, Ethiopia that the continuation of his rule after term expiration is necessary for political stability, which confirmed his long held disinterest to prepare the country for free and fair parliamentary election in November 2020.

As a result, the unconstitutional and impractical electoral law he signed on February 20, 2020 furthers the scheme to rig the upcoming election in November or to get term extension with the support of international partners. That portends public unrest as inevitable consequence. The National Independent Electoral Commission (NIEC) exhibits the motto, “The revival of a failed state is in democratic elections held on schedule.”

It’s blessing that the term in office of President Farmajo and the 329 members of the federal parliament is 4 years without extension as prescribed by the articles 60 and 91 of the provisional constitution (PC). The Somali people has no more appetite to tolerate the abuses, corruption, and ineptitudes of the president and members of the federal parliament beyond 4 year term. No Somali government has yet to gain public satisfaction and support for second term simply because of the failures to uphold the rule of law, reduce corruption, strengthen social harmony, and demonstrate responsible leadership for good governance.

President Farmajo displayed the unpatriotic habit of being obsessively focused on plotting on his reelection from the day he was elected. He established patronage system and network of cronies and sycophants who engaged in abuse of power, corruption, insecurity, and public discontent.

Independent experts on statebuilding agree that the federal government of president Farmajo has failed to fulfill the statebuilding priorities despite the unprecedented political and financial support it received from the international community. Lately, the African Union (AU) decided to intervene in the standoff between the federal government and federal member states of Somalia that disrupted the implementation of national priorities. AU decision dispels President Farmajo’s senseless claims of refusing foreign intervention in the domestic affairs of Somalia. President Farmajo has to accept to compete fairly on his 4 year leadership record. No more no less.

The flaws of the electoral law are many. It’s inconsistent with the letter and spirit of the PC. Article 46 of the PC states that public representation (elections) should be open and give everyone the opportunity to participate through simple and understandable electoral rules and procedures, unambiguous, free from subjective opinion. The public representation system (elections) must satisfactorily and reasonably prevent any crisis that may arise as a result of political contests and election results. These are the basic provisos that the electoral law violates.

The law violates article 11 of the PC concerning the “equality of citizens” of the FRS. The article stresses that Somali citizens enjoy same rights and responsibilities and they are equal in front of the law. In contrast, the electoral law treats the Somali citizens differently for different reasons and enforces the use of prohibited clan identity which is in conflict with article 8 on Somali citizenship identity.

Article 53 of the law gives the federal parliament the authority to decide what to do if the NIEC can’t hold election on schedule. This implies that the federal parliament will most likely extend both its term and the president’s term under the excuse of avoiding power vacuum. The extension is in conflict with the articles 60 of the PC and 3 (3) of the electoral law.
The law states that the federal parliament will issue special electoral rule (law) for the election of the representatives of Somaliland people. On the other hand, it defers (denies) the political rights of millions of Somali citizens living in Benadir region (Mogadishu) to elect and be elected. This discrimination distorts the legitimacy of the national representation, shatters the common interest of the Somali people, and creates social stratification.

The law fails to identify the electoral constituencies at state and district levels and to assign one seat of the house of the people to each constituency on the basis of the principle of “equality of the vote,” which defines the approximate number of citizens represented by each representative. It fails to specify the distribution of the 54 seats of the Upper House to the federal member states in accordance with the conflicting principles of article 72 of the PC. It fails to explain how to reconcile competitive election with the fulfilment of women’s quota and clan balance.

Furthermore, other problems undermining the implementation of the electoral law include lack of completion of PC, fragile national integrated system of governance, widespread insecurity, minority and majority struggle, absence of laws on government organization, on citizenship, on political party, and on census. The census and the voter registration are the stepping stone for fair representative election. The law requires the approval of 10 regulations before its implementation. Those problems are compounded by the difficulty of carrying out the census and voter registration, by the lack of neutrality, independence, professionalism, and effectiveness of the security forces and judicial system, and by the lack of confidence in the integrity of the electoral commission. The law overlooks the role of state and local authorities in the federal election. It is full of contradictions and requires extensive corrections. Therefore, the law can’t be implemented as it is.

To mitigate public unrest, Somali citizens should consider signing a petition against the unconstitutional electoral law. Article 86 (d) of the PC allows ten thousands (10,000) citizens to challenge the constitutionality of a law. In absence of constitutional court, the petition should be submitted to the President, federal parliament, federal member states, the office of the United Nations Mission for Somalia (UNSOM), and African Union Mission for Somalia (AMISOM), and to the association of Somali lawyers for immediate suspension.

The Somali people are looking forward to an election based on an enhanced 2016 electoral model to be agreed among political stakeholders for way-out of the current impasse and for less problematic election in November 2020. Fraudulent election will open Pandora box that will undo years of sacrifices and investments.

The peace, stability, and prosperity of Somalia depend on democratic elections and not on President Farmajo’s hold on power or anyone else. Elections refrain citizens from protests and violence in the streets. President Farmajo knew long before 3 years ago that one of the highest priorities in his term in office was the preparation of one person one vote free and fair election in 2020/2021 but he chose willfully to do nothing.

The underlying conditions for free and fair election are freedom of media, free expression, neutrality of security forces, equal access to state media, and prohibition of use of public resources and institutions for election purposes. The federal parliament issued law curtailing media freedom. Independent media representatives protested vehemently against the law censoring free speech and free media and appealed to President Farmajo not to sign the law. In words of Amnesty International, “Amnesty International has documented dramatic deterioration in the right to freedom of expression and media freedom since President Mohamed Abdullah Farmajo took office in February 2017. There is also widespread allegation of bribery of media outlets by the Somali government officials at the office of the president reportedly paid monthly bribes to some media owners and directs not to publish unfavorable stories.” Unfortunately, the federal government shows no signs of yielding on state media monopoly for fairness, integrity, transparency, and accountability.

International partners should not support authoritarian system of governance, term extension or fraudulent election, misuse of public funds, security forces and judiciary institutions for personal political benefits. The international Partners should not insist on policies that compromise a peaceful and prosperous future of Somalia.