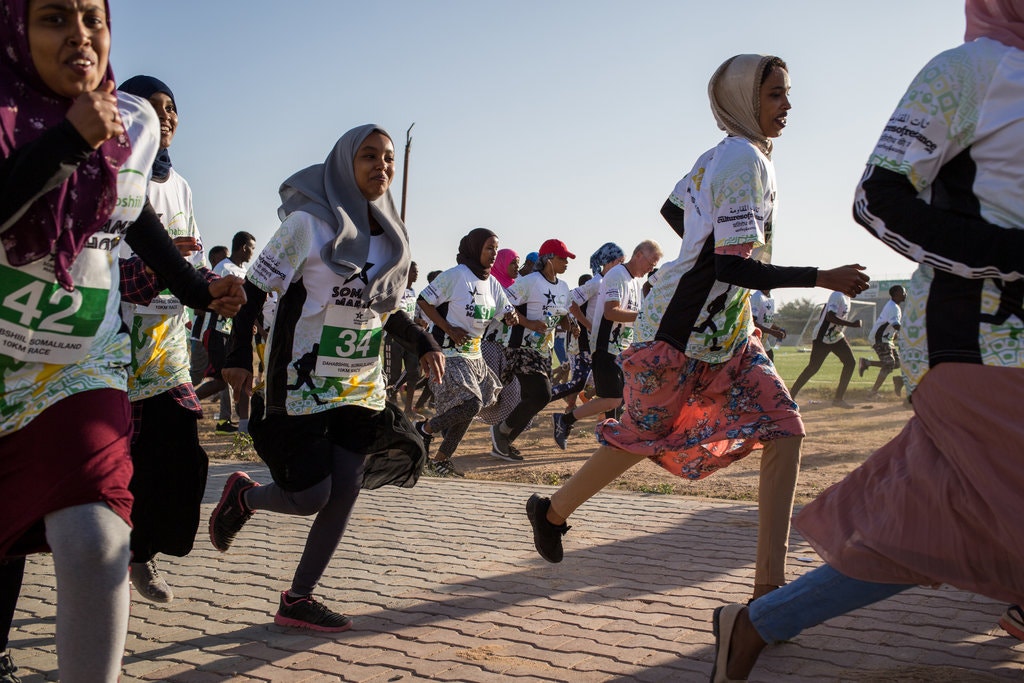 In a traditional, conservative society, more female athletes are participating in an annual running event, a sign life may be changing here for women.

“Why can’t you just stay at home?” the man shouted at the two young female runners as they darted by on the racecourse — wearing long skirts, arm-covering T-shirts and running tights in the 90-degree heat.

He was not the only person jeering the women running in this 10-kilometer race, part of an annual event that includes a marathon, where more than 250 of the 320 contestants this year were men. But some spectators had kinder words.

“Run and beat the boys with the skinny legs!” urged a woman decked in a brown jilbab, a traditional loosefitting robe, as a different pair of women sprinted past. All the female runners were dressed in line with Muslim practice in the region, which calls for most of a woman’s body to be covered.

The marathon began two years ago as a fund-raiser for education in Somaliland, which declared independence from Somalia in 1991, setting up its own Parliament, currency and flag. 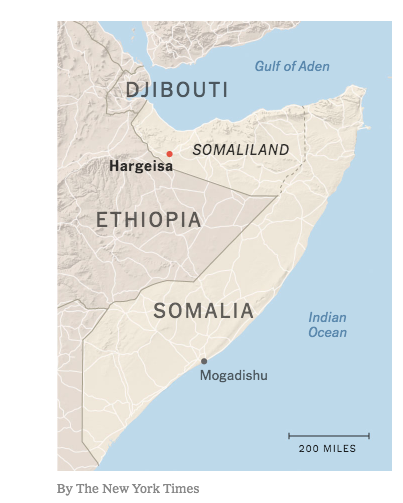 The breakaway region, in the northwest of Somalia, is not recognized internationally. But in contrast to areas in the south, which are plagued by clan infighting and terrorism, Somaliland is an oasis — attracting tourists, hosting a prominent literary festival, and even enticing multinationals like Coca-Cola.

The running events are part of this cultural and commercial outreach, with athletes from all over the world participating. This year, runners from 16 nations came to Hargeisa, the region’s capital, to take part.

Each year, more Somali women have been competing, though only in the 10-kilometer event, and the increased participation reflects how life is changing, albeit slowly, for women here.

In Somaliland’s male-dominated society, government, business and the media are still almost the exclusive preserve of men. Women are twice as likely as men to be unemployed and less likely to reach higher levels of education, and face persistent obstacles in winning elections, according to a study published last year.

Still, in recent years, there have been hints of change, with women becoming doctors, entrepreneurs, teachers and human rights activists.

And some are running.

Hanna Mukhtar, 17, runs each morning at dawn on the outskirts of Hargeisa, usually with a teenage friend.

There are barely any sidewalks, let alone running tracks. But by leaving the city proper, they avoid the traffic that clogs its sandy roads, where donkey carts and S.U.V.s jostle for space.

Goats and sheep wander aimlessly, and the city’s minarets and colorful corrugated roofs appear in the distance.

Here, the young women don’t have to withstand the stare and taunts from men and some women who disapprove.

“When I run, I feel strong and free,” said Ms. Mukhtar, who won the 10-kilometer run this year and last.

With one million people, Hargeisa has grown over the past few years. Shopping centers, apartments and hotels have sprung up. New restaurants, serving camel steak, and sweet and creamy tea, have opened, along with cultural centers offering live music and dance.

The city’s center bustles with activity, as traders sell spices and frankincense next to vendors with textiles imported from China. Money changers with wads of cash sit under billboards advertising telecom companies promising cheap data and international call rates.

Asma Dhamac, a psychologist and mental health advocate, also likes to run with friends outside the city in the early hours of the day, taking advantage of the cooler morning air.

Even amid the acacia trees and quiet roads, she said they still sometimes encounter people who chide them.

“They would say: ‘Women are not allowed to run or wear trousers. You will become barren,’” said Ms. Dhamac, who competed in the 10-kilometer race this year.

Comments like this do not seem to be making much of an impression, though, on Somali women.

In 2018, the first year of the event, only 13 women competed in the 10-kilometer race, and only five of those were Somali. This year, 55 Somali women ran in the event, out of 63 female competitors.

Edna Adan, a former foreign minister in Somaliland and a pioneer activist in the struggle to end female genital mutilation, sees this as an important sign.

A former runner herself, the 82-year-old Ms. Adan, founder of a respected maternity hospital, said it was important to remind Somali female runners that what mattered was “the training they did, the preparation they made and the ability that they could keep up with women of different countries.”

The race is about reminding young girls that their gender or nationality isn’t “a handicap” to their own success, Ms. Adan said.

At this year’s 10-kilometer race, it seemed as if the women found support in each other.

The competition began at 7:30 a.m. in the Hargeisa Stadium. The women jostled against one another, running on the grass carpet of the arena before hitting the labyrinthine streets and alleys of the city, where tea shops and kiosks were just opening up.

Throughout the relatively flat route, they ran in pairs, sometimes pulling each other by the hand, and encouraging one another to keep going even after some gave up and started walking a few kilometers in.

Women in Hargeisa who are interested in sports are finding other outlets besides the marathon. One is the Lions Women’s Football Initiative — an informal soccer league that also offers training for women in self-defense and running, along with workout and nutrition guidance.

Just a few months after it started in 2016, dozens of young women came to train and run at a private pitch rented by its founders, Asma Saed and Savannah Simons, who both work for the marathon.

Grandmothers and children come to watch the teenagers work out every week. In the beginning, said Ms. Simons, a British national, so did young boys, who crowded the gates or got on the walls around the pitch to peer and jeer at the women. They are no longer doing that.

Other spaces dedicated to women’s swimming, yoga, basketball, and taekwondo have also sprung up in the past two years in Hargeisa. And many young women are also forming groups and exercising before going to work or after they leave university, said Marwa Mawliid, a soccer coach at the Ubah Inspire and Fitness Center.

When the center was established in 2017, “people thought we were crazy,” Ms. Mawliid said.

Next year, she’s aiming to become the first Somali woman to compete in and finish the marathon itself.

And her ambitions after that: “I want to run for my country,” she said. “I want to compete on the global stage.”

Abdi Latif Dahir is the East Africa correspondent for The New York Times. He joined The Times in 2019 after covering East Africa for Quartz for three years. @Lattif