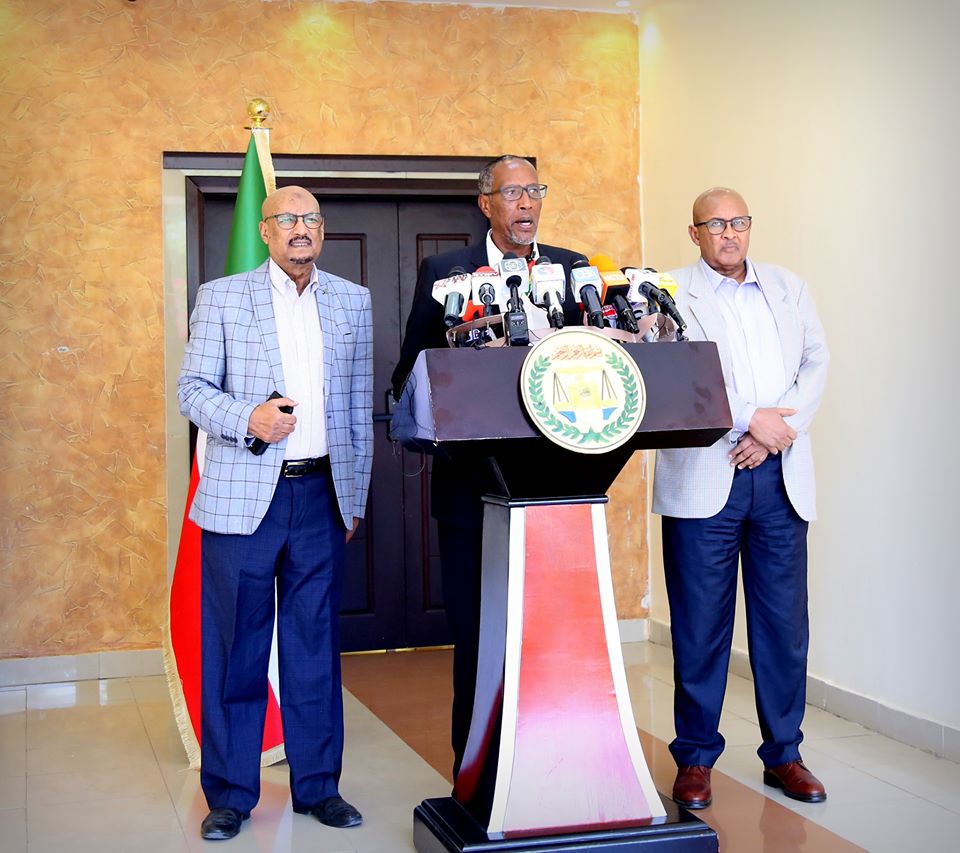 Jointly speaking to the media after a meeting that lasted well into the morning, His Excellency the President of the Republic of Somaliland, Musa Bihi Abdi, and the Chairmen of the two opposition political parties, Dr Abdirahman Mohamed Abdullahi ‘Irro’ of WADDANI and Eng. Faisal Ali Hussein, UCID, accentuated how wrong and off the mark the World Bank and other international financial institutions were in addressing debt relief, and new projects and loans to federal Somalia alone.

As erstwhile partners in the ill-fated, legally un-realized 1960 merger of the two separately  independent countries of Somaliland and Somalia, the World Bank, they said, should have developed the terms and settlement of debt relief packages with the present-day realities of the Republic of Somaliland and Federal Somalia of Villa Somalia.

“The World Bank must equitably address the two countries that came together in 1960 and who finally severed ties with one another in 1991 as two separate, equal entities in all its dealings related to that which was formerly termed as ‘Somalia’, President Bihi said.

“We do not mind if it has to assist or support Somalia but the Republic of Somaliland – unrecognized as it might be internationally – is a reality none can ignore or sidestep,” he added.

“The World Bank must in all matters, including the recent debt relief it engineered, direct its dealings with both entities as separate countries each of which have a right to benefit what belonged to or emanates from the time of the old now defunct partnership, President Bihi emphasized.

“The World Bank must wake up to the reality that the two countries had nothing to do with one another since 1991. It must deal with each on its own. The debts,” he said, “were incurred when the two were still in the so-called old ‘merger’. The benefits of today, consequently, must go two ways: the Somaliland way and the federal Somalia way”.

“The debt relief the World Bank and other financial institutions are giving Somalia are timed to help him another term using the benefits it accords Somalia,” he said.

Faisal urged the World Bank and other institutions to think before they dispersed any benefits accrued.

“The boys who have taken over Villa Somalia will only use  it to finance their return in the elections,” he gunned.

The IMF, World Bank and the African Development Bank (AfDB) all announced that the slate of all debts owed and other financial arrears had been wiped clean of ‘Somalia’.

The AfDB, adding insult to injury, used an archaic map which totally ignored the 30-year reality – a nation much more successful, more democratic and more functional than many of the recognized countries the African financial institution represented.

By referring to ‘Somalia’ as that which reigns at Villa Somalia, and ignoring the other part that made up that country before 1991, the Republic of Somaliland, international financial organizations appear to be making an indelible blunder far much worse than thhat which the military dictator and the Somalia civilian leaders before him perpetrated against the people of Somaliland for over 30 years until 1991.