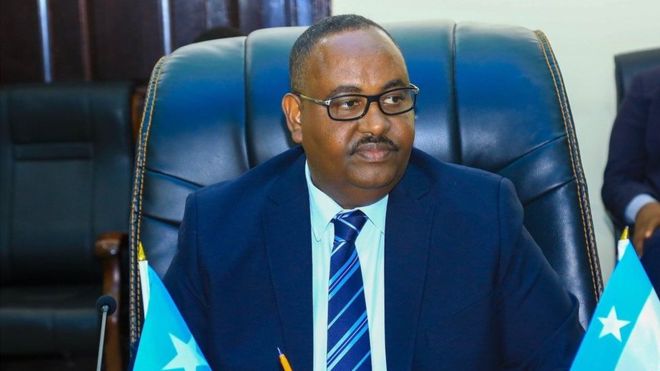 President Deni, in a call-in interview with the Somali section of the British Broadcasting Corporation (BBC), alluded to subversive activities which the leaders at Mogadishu’s Villa Somalia were busy at inside the unrecognized republic which was not a signatory to the federal constitution and the federal states borne of which Puntland was one.

“Intelligence reaching me points to the (FGS) government busying itself at subversive activities (in Somaliland) which may cause fresh in-fighting and strife,” he said.

He stated said activities did not bode well for ‘Somalia’.

“The FGS,” he exemplified his assertion “directly communicated with Somaliland clans bypassing the government to foment opposition to the existing government,” he said.

President Deni said whilst he welcomed any settlement reached between the governments of Somaliland and Somalia in the on-going – but sputtering talks, he was concerned by the undue interferences of Somalia in Somaliland which aimed to derail a moderated settlement of any kind in order to win over Somaliland as a whole without respecting on-going processes.

It is the first time, a federal Somalia member has so openly revealed Somalia sabotage which actively focused Somaliland over the years. Somaliland has often called the international community to look into such nefarious interferences to no avail.

President Deni rules the State of Puntland which shares boundaries and a great deal of commercial and social activities with the Republic of Somaliland which has reclaimed its sovereignty from Somalia in 1991 which, however, were often marred by military clashes between the two sides over areas in the Sool and Sanaag regions.

Somaliland has, since then, built a fully-functioning modern state structure which has often been called the only certifiable democracy in the region. For nearly thirty years, the unrecognized republic had nothing to do with Somalia and the latter has no jurisdiction whatsoever over Somaliland despite unsupportable claims which are seemingly sanctioned by an obtuse UN and AU agencies. The latter two, along with the EU, the US, Turkey, Qatar and many more maintain over 30 000 troops (registered and unregistered) peacekeeping forces in federal Somalia. None are in Somaliland – and are not needed, either.