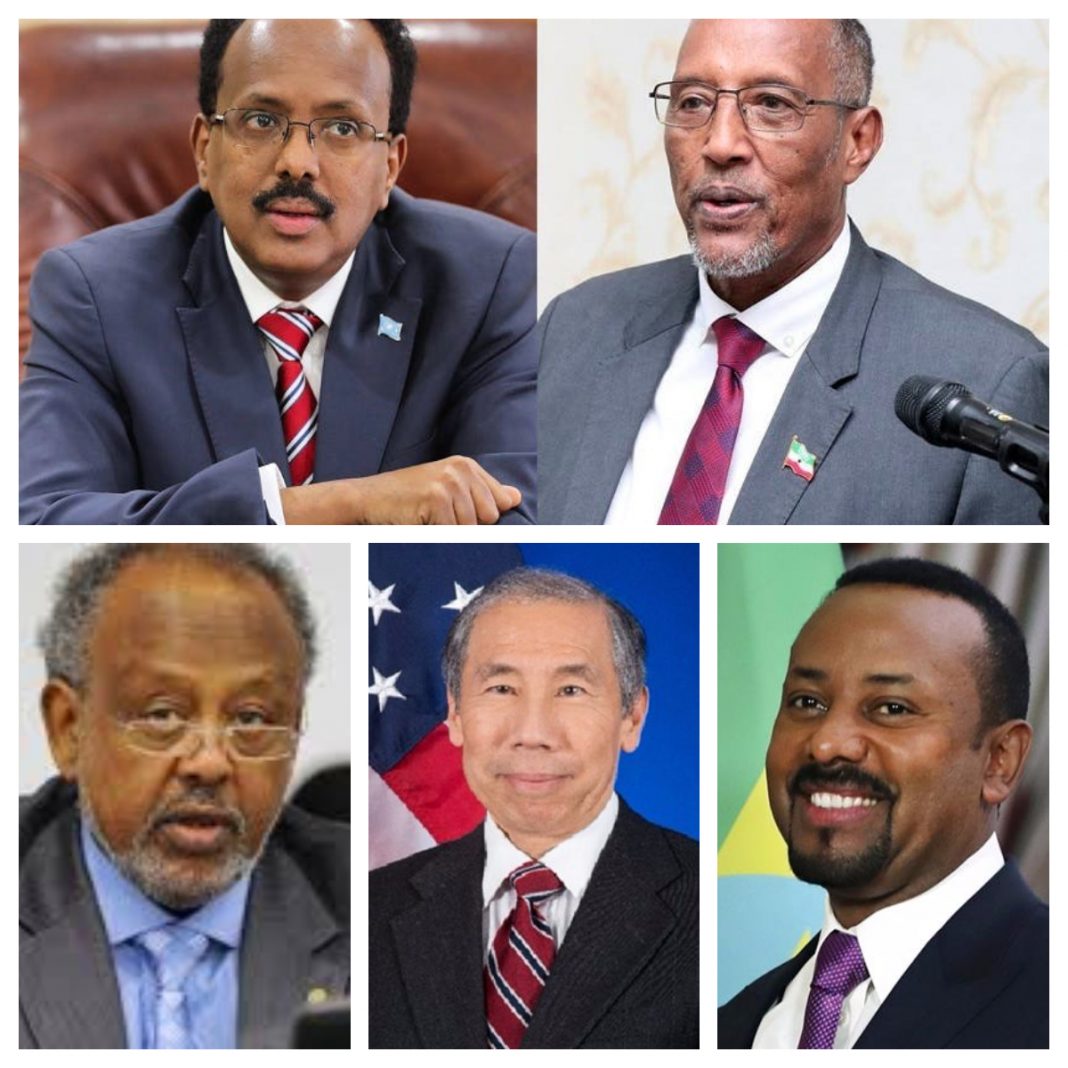 Under the mediation chairmanship of the President of the tiny Horn of Africa republic of Djibouti, Ismail Omar Guelleh, very high-calibre delegations representing, respectively, the republic of Somaliland and the Federal Government of Somalia are scheduled to resume talks in Djibouti Sunday.

Tomorrow in Djibouti, I will chair a meeting between President Mohamed Abdullahi Farmajo and President Moussa Bihi Abdi to follow up on the mediation efforts between the two leaders. I have also invited Prime Minister Abiy Ahmed to attend the discussions.

The meeting, according to publicized bits and pieces about this fresh bout of the talks, was called for by the United States in the person of its Ambassador in Mogadishu, Donald Yamamoto, and facilitated by a beleaguered Djibouti leader, Ismail Omar Guelleh, whose country has been recently rocked by fierce demonstrations against his 22-year-old, authoritarian rule. 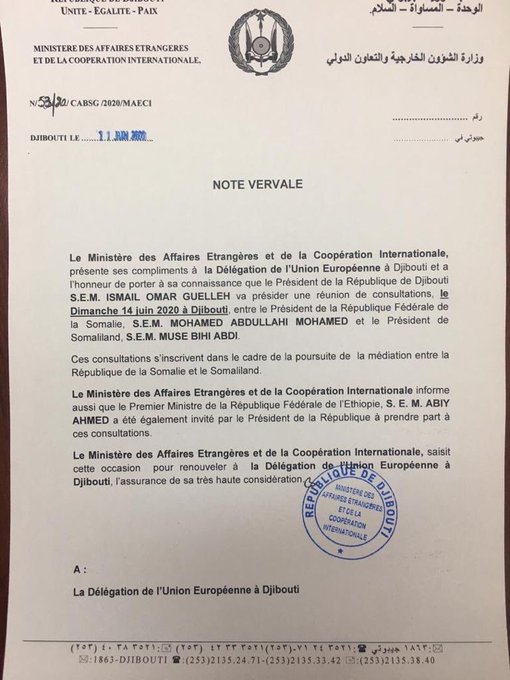 Eu Ambassador to Somalia/ Somaliland naively believing, though, that all that is separating the two sides to reunite in another ill-fated, illegitimate merger were pent up ’emotions’ that needed release.

The EU Delegation hopes the meeting becomes a first step to embrace common gains in which all may prosper through dialogue; and the release of emotion retained for a long time. Doors of hope for agreement should not close again. https://t.co/yyKyDyJi41

Abiy Ahmed, the Prime Minister of Ethiopia, who, earlier in 2019, made a face-to-face brief meeting between President Bihi and President Farmajo at his office, Addis Ababa, will be president along with international observers from the United States, the European Union, the United Kingdom and the African Union.

It is ironic that neither of the firstline mediators – Guelleh and Abiy – nor the Somalia President, Farmajo,  is in power through a one-person, one-vote election unlike the Somaliland President Musa Bihi who is the 5th President of the Republic of Somaliland three of whom changed offices through universal suffrage – a democratic precept alien to all of Djibouti, Somalia and Ethiopia.

President Bihi hosted, Saturday, Somaliland opposition parties, along with other major political players, to brief them of the impending dialogue.

Following that meeting, Deputy Chairman, Abdirizak Khalif of Waddani, wholeheartedly welcomed the resumption of the talks expressing reservation only in, as he expressed, the event that the President meandered out of his mandated executive leadership parameter.

The position of the #waddani Party: The law allows the president and the government to negotiate with Somalia to achieve recognition, but we confirm to Somaliland's independence is what the constitution is based on pic.twitter.com/51po4qRR9E

Faisal reasoned his stand by pointing out that the Somalia government was, in fact, fragmented into six governments including the Villa Somalia Mogadishu seat, and that President Farmajo and his international allies were using the occasion to bolster the waning popularity of a president gearing up for a presidential election only six months or so away. 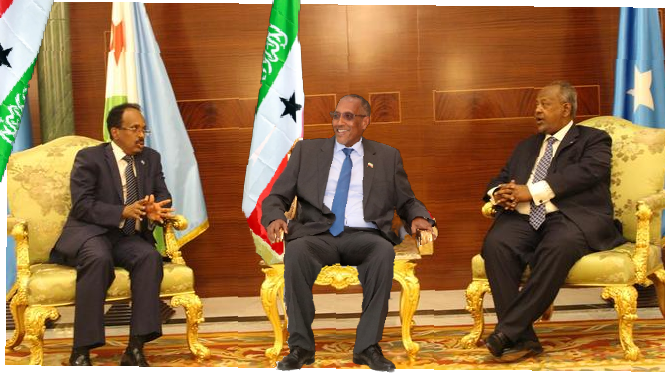 The Somalia federal government delegation comprises of the President, Mohamed Abdullahi Mohamed ‘Farmajo’, his Prime Minister, Hassan Ali Khaire, the Speaker of the Lower House of the Federal Parliament, Mohamed Mursal Sheikh, and the Minister for Interior and Internal Security, Abdi Mohamed Sabriye. 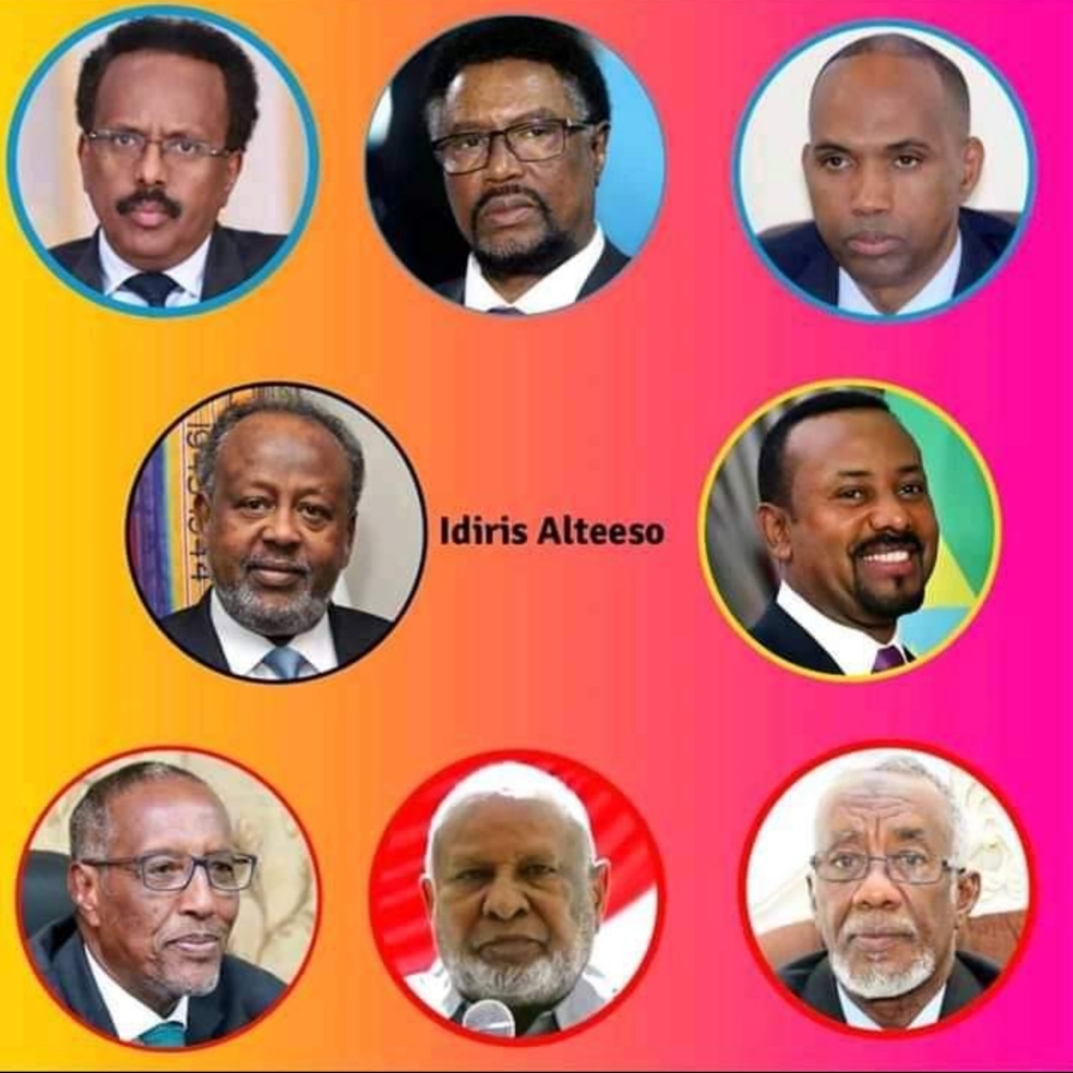 If and when the two sides meet – if it goes beyond the preliminaries, the Somaliland electorate expects only one outcome: that Somalia concedes the legitimate restoration of Somaliland sovereignty and that future talks can only be resumed as two nations discussing mutually beneficial cooperation.

The Somaliland electorate overwhelmingly approved its sovereignty-based national constitution in 2001.

Somalia, on the other hand, wants to look good and tough and that it comes out of the meeting victorious over a vanquished Somaliland which was made to accept a subservient, federal state-level position – as both the Communications Director of Villa Somalia, Abdinur Mohamed, and the current deputy prime minister of Somalia, Mehdi Guleid, articulate here, respectively. Mehdi is among so-called Somaliland-born officials who assumed roles with the Mogadishu government as mercenaries and economic opportunists.

H.E @M_Farmaajo remains committed to all efforts that lead towards successful talks with Somaliland. This is in line with his reconciliatory approach and affirms his position to ensure the brotherhood that is the core fabric of this nation is sustained.

According to the deputy vice-president of Somalia @KhadarGulaid. Somalia’s president will be committing political suicide if he recognizes #Somaliland as an independent country. pic.twitter.com/9SUkWWxoZO

Earlier meetings between the two sides, listed below, did not bear fruit with Somalia, relying on its ill-justified international recognition, going back on its signed after each and every meeting – a situation that left Somalilanders no choice but to reject further impotent attempts.

It is noteworthy that not a great many Somalilanders are thrilled or hold high hopes of the Djibouti meet with some calling the ‘agenda-less’ talks a ‘gross highjack of national principles’.

1/2 No reason for President Bihi to attend a meeting by a bunch of losers in Djibouti.Yamamoto has no power to influence any US policy & is so desperate to increase his statue before retiring next year.Abiy Ahmed offered military help to Karmajo in exchange for Zayla to convince pic.twitter.com/9Z1Crd1zDP

Muse celebrates Independence Day with Farmaajo in Djibouti 😟This is a huge political earthquake https://t.co/q0LBXw20g7

In case we forgot, this time last year.#Somalia decided to NOT SHOW UP at all for talks with #Somaliland, leaving SL's team stranded in Nairobi.

Any meeting with this administration is tantamount to an indirect endorsement. Absolutely inexcusable.https://t.co/jB8o0PFYQb

I'm wondering how he will mediate between, while he can't solve his own issues.

Nothing to talk about but the recognition of the Republic of #Somaliland.https://t.co/PK0gZjMiZP