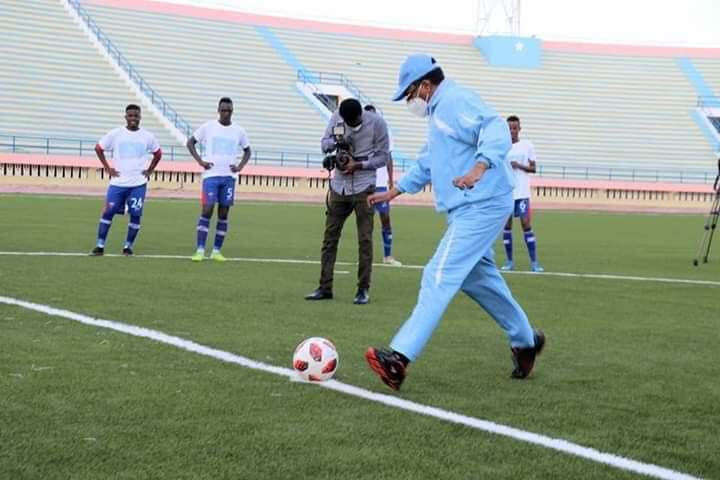 Again portraying itself for what it is – a country at war with itself, the capital of the federal republic of Somalia has, today, become a beehive of fully armed, army base as thousands of AMISOM troops, army personnel, intelligence units and motorized police patrol units took over all the approaches to Mogadishu, as well as several districts adjacent to Mogadishu Stadium.

The operation was mounted earlier on Tuesday in anticipation of the Somalia president, Mohamed Abdullahi Mohamed ‘Farmajo’ moving from his heavily fortified Villa Somalia office to re-open the rebuilt and refurbished sports village in walking distance at Yaqshid.

Affected Mogadishu districts include Yaqshid, Wardhiigley and Daynile on top of the two northeastern and southwestern approaches to the city.

Even so, security forces, according to incomplete reports coming from official sources, unearthed an anti-tank mine planted at one of the many roads leading to the Stadium. The mine exploded. The extent of damage it caused, if any, has yet to be released.

The inauguration of the facility was scheduled to coincide with the country’s independence from Italy on 1st July (1960) but was moved one day ahead for security reasons, according to confidential sources. 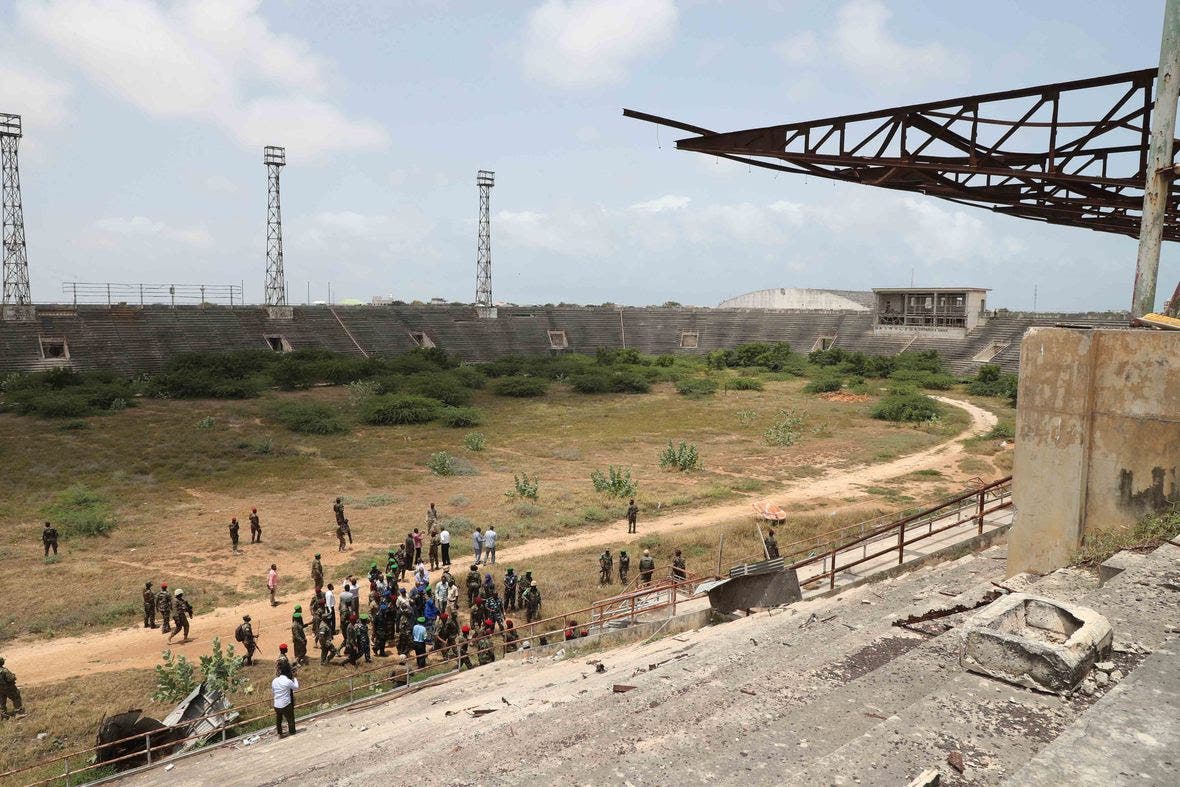 The largest sports facility in the country has been destroyed by the war to oust the military dictator in 1991 and ensuing clan wars that turned the once pride of the capital into a den for thieves and robbers – an awful hulk housing armed militias, Al Shabaab saboteurs, clan militias and all sorts of city riffraff and squatters until it was taken over by AMISOM in 2012-13. 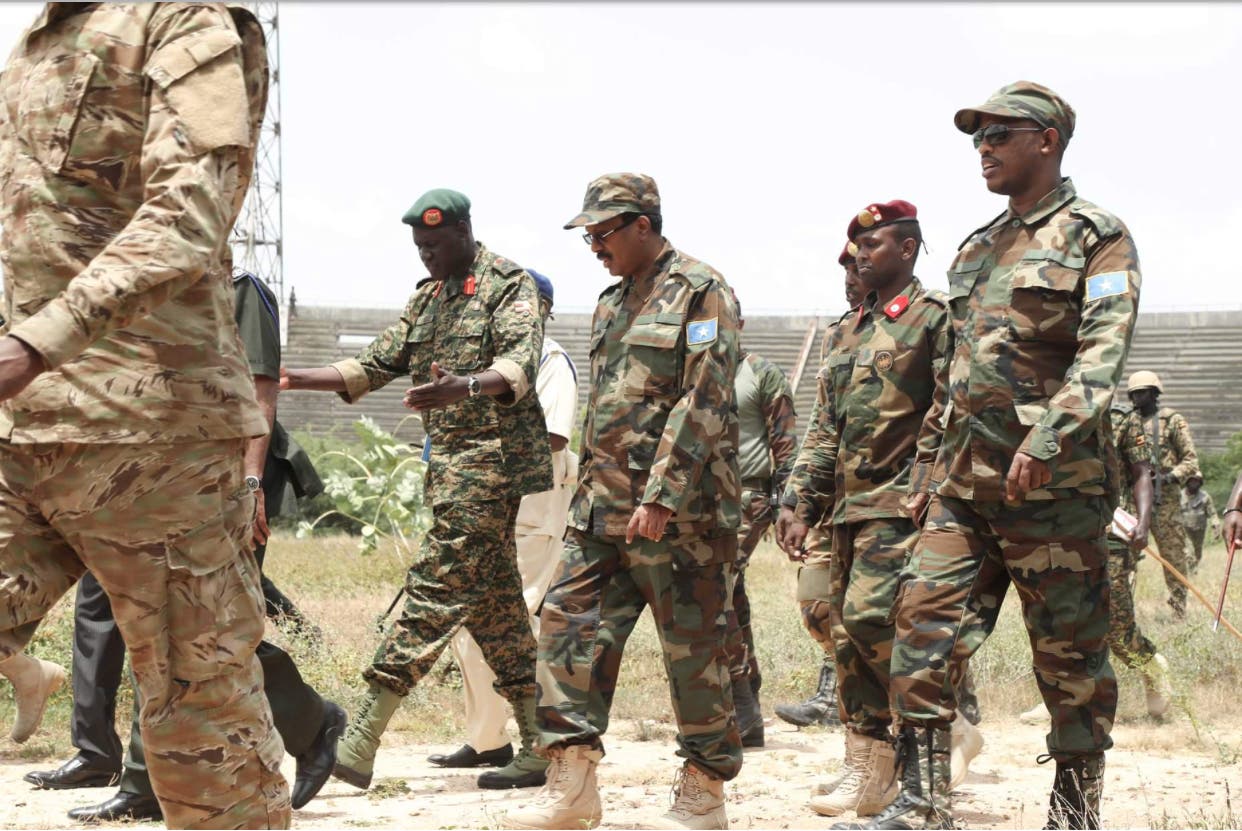 On August 27, 2018, President Farmajo took the Stadium over from AMISOM.

The costly rehabilitation of the sports village was undertaken, according to the government, in order to turn away the attention of many of the city’s youth and sports-loving populations from the hourly reports of war and insecurity in Somalia to other pastimes.

The EU and Norway, largely, bankrolled the Stadium renovation. 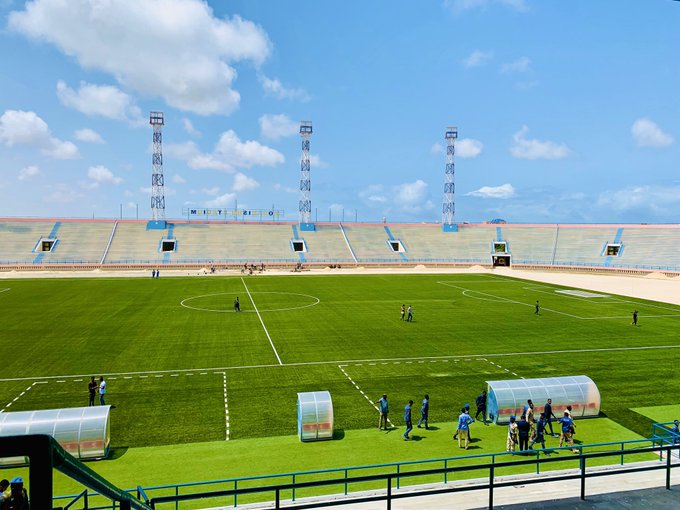 FACT: The refurbished Mogadishu Stadium in Somalia, is today hosting its first match in 16 years.

The match is between Mogadishu City Club and Horseed Sports Club, which all play in the Somali Premier league.

The stadium was once the headquarters of Al-shabaab militants. pic.twitter.com/xc3ImtESZn

Somalia security is still largely manned by over 22 000 AU peacekeeping troops bolstered and supported by tactical units from the US AFRICOM. AFRICOM has an operational as well as a commando training facility at the former Somalia air force base of Balidogle, Wanlawein of the Southwest Federal State of Somalia some 90 or so kilometres to the west of the Capital, Mogadishu.

Turkey has built the largest army base outside of Europe in Mogadishu where it turns out thousands of other army trainees to ostensibly take over the security of their country one day although other reports allege that Turkey has other, ulterior motives behind the training of the highly-equipped units that graduate from its academy.

Despite the goodwill billions of US Dollars the international community has never stopped pouring into Somalia since 1991 and the collapse of the central government, it has yet to achieve what the Republic of Somalia has made possible during the same period. Unlike Somalia, the world paid – still does – minimal attention to the development of Somaliland despite an exemplary track record in rebuilding peace and security, a functioning modern state, in showcasing democracy, in holding several, high-profile one-person, one-vote presidential, parliamentary and municipal elections.

Somaliland restored in 1991 an internationally recognized 1960 independence which it lost to an over-zealous desire to pioneer a Greater Somalia comprising of itself, Somalia, NFD of Kenya, OGadenia/Reserve Area of Ethiopia and Djibouti. Its merger with Somalia on 1 July 1960 ended with a loss of over 50 000 in an ill-reported genocide of Somalilander civilians, destruction of all major cities and displacement of nearly 500 000 family units as refugees in neighbouring and a flight to all corners of the world.

Somalia, in more ways than one, is still riding piggyback on Somaliland and its wellbeing by posing as the only legitimate government of the old Somalia despite the fact that it has nothing with Somaliland and has no legal hold on Somaliland sovereignty which can hold its ground in any court of law. All aid flow goes to Mogadishu, the UN and AU recognize it while Somaliland is unjustifiably denied the right to international investments, to multi-lateral agreements, to access to international funding and the right to self-determination and a rightful restoration of its sovereignty. People suffer and the world looks on indulging an incompetent, hopeless make-belief government that hardly functions in the capital – Mogadishu – itself.