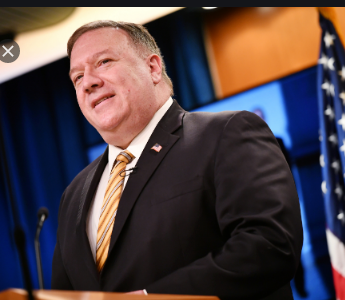 It’s no secret that China covets Africa. Africa plays a major role in China’s Belt and Road initiative, and many African governments have featured in China’s debt-trap diplomacy. Whereas U.S. foreign assistance helps African countries to develop capacity and become independent trading partners, China takes the opposite tack: It brings in its own workers to extract wealth. They live in compounds isolated from the local population and then they leave, the wealth gone and the environment in ruins.

The Trump administration’s Africa strategy recognizes the importance of competing on the continent, especially against Russia and China. Nowhere is this competition more active and of greater strategic concern than on the Horn of Africa. “From 2014 to 2016, Djibouti’s external public debt-to-GDP ratio ballooned from 50% to 85% with most of that debt owed to China.” National security adviser John Bolton remarked when unveiling the Africa strategy. (Today, that figure has skyrocketed to more than 100%). Not only has China established a military base in Djibouti only miles away from Camp Lemonnier, but it has also reportedly shot lasers at U.S. pilots from its base to interfere with U.S. operations operating out of the tiny east African country.

It is against this backdrop that the State Department’s policy to ignore neighboring Somaliland is strategically negligent. In 1960, the United States recognized Somaliland’s independence. Somaliland subsequently joined the former Italian Somaliland to form Somalia, but in 1991, after the Somali dictator Siad Barre waged a campaign of genocide against the Isaaq clan predominant in Somaliland, the northern region reasserted its independence. While Somalia descended into chaos, Somaliland remained peaceful. While Somalia eschewed democratic elections (and just delayed elections initially set for later this year), Somaliland has repeatedly held fully democratic, one-man, one-vote, biometrically secure elections.

Any strategic planner worth his or her salt recognizes the importance of Somaliland. At a time when China seeks to corner the world’s market on rare earth elements, Somaliland may host economically viable deposits. And while China’s presence in Djibouti puts America’s presence at Camp Lemonnier at risk, Somaliland’s modernized Berbera port is better situated for both America’s strategic and commercial interests. Berbera’s nearby renovated airfield was once used both by NASA and, during the Cold War, by the U.S. Air Force as well.

Transparency International regularly ranks Somalia as the most corrupt country on Earth. Its leaders have literally squandered tens of billions of dollars. While Somalia still struggles to defeat terrorism and continues to see the Islamic State and al Shabab use its territory, Somaliland remains secure.

It is against this backdrop that the State Department’s policy to isolate and undermine Somaliland remains so ill-considered. Prior to the arrival of U.S. Ambassador Donald Yamamoto to Mogadishu, the State Department pursued a de factopolicy of one country, two systems. It recognized Somaliland’s import and understood that it did not need to recognize the country in order to work with it and secure American interests. Yamamoto changed this: He reversed prior policy and boycotted Somaliland in favor of a Mogadishu-first policy. This affected not only diplomacy but U.S. security. In his efforts to strangle Somaliland, for example, Yamamoto ended nearly all liaison work with the U.S. defense attache’s office in Somalia. Yamamoto was arrogant, however. He never listened nor understood that isolating Somaliland was never going to make it reunite with a failing state that once perpetrated genocide against it. Rather, Yamamoto’s revisionist policies only opened the door to Russia and China.

That Somaliland has not fallen under the sway of either is less due to proactive U.S. policies and more a testament to Somaliland’s pro-Western attitudes. These were most recently on display today as Somaliland and Taiwan established ties.

This is a move the State Department should reward. Certainly, Beijing will be furious. If past is precedent, it may try a carrot-and-stick approach. It will simultaneously seek to undercut Somaliland while offering to bribe it to dump Taiwan and embrace Beijing. If this happens, the American opportunity in Somaliland will be lost.

Secretary of State Mike Pompeo repeatedly talks about the challenge China presents. Simultaneously, he has shown more friendship to Taiwan than any recent secretary. It is time, however, he directs his Africa bureau to recognize that the competition with China or the need to support Taiwan does not end on the Taiwan Strait or in the South China Sea, but also extends to Africa. It is time to support Somaliland more, not less. While Yamamoto and career diplomats might complain, doing so not only is the moral thing to do, but there is both long precedent and doing so will also benefit the U.S. strategically.