Technical sub-committees to thrash out the fine points in areas relating to shared airspace management, the non-politicization of aid and development and security should have arrived in Djibouti last Saturday, July 4. They did not.

According to confidential sources close to both Mogadishu and Djibouti, President Farmajo named Somaliland-born members on his pay to the sub-committees at least on two counts.

The mediators and the Republic of Somaliland rejected the nominations outright for obvious reasons.

Then, Mogadishu tried to convince both Somaliland and Somalia that the sub-committees be turned into ‘intellectual think-tanks’ to, again, justify the inclusion of Somaliland-born economic opportunists working for Mogadishu.

With the intervention of members of Djibouti and members of the international community, Somalia tentatively agreed to withdraw the contentious members and come back to the roadmap to hopefully send its delegates to Djibouti on Saturday, July 11.

Concurrently with the failed dilution of delegate composition attempts, Mogadishu also failed in a frenzied lobby to change the venue of the talks from Djibouti to Addis Ababa or Ankara/Istanbul in Turkey.

The talks which started in 2012, as jump-started by the international community, were set to happen between the two states who came together in the ill-fated union of 1960. They started as such but Mogadishu unsuccessfully tried to sneak in Somaliland-born members loyal to Vila Somalia on several occasions. Failing that, it intentionally breached all areas in which the two sides reached an agreement which stalled the talks for almost seven years.

The talks resumed in Djibouti on 14 June 2020 resuscitated by US energy and financing and mediated by Djibouti. They were launched off by the two presidents of the Somaliland Republic, Musa Bihi Abdi, and Somalia, Mohamed Abdullahi Mohamed ‘Farmajo’. Ismail Guelleh, President of Djibouti and Abiy Ahmed, the Prime Minister of Ethiopia attended the first-day meeting besides high emissaries from the international community and the region.

Three days of detailed talks between the two sides at a ministerial-level followed with many fits and starts as Somalia insisted on relegating already signed points in previous talks to further debate.

To save the day, Djibouti negotiated a truce between the two sides releasing a communique which was not signed by either side which called for the formation of sub-committees to take up the talks from where the ministers left them.

It is the composition of these sub-committees that Mogadishu is again trying to manipulate to derail the talks and the first point of the communique which specifically cautioned against such behaviour in order to build confidence for continued dialogue. 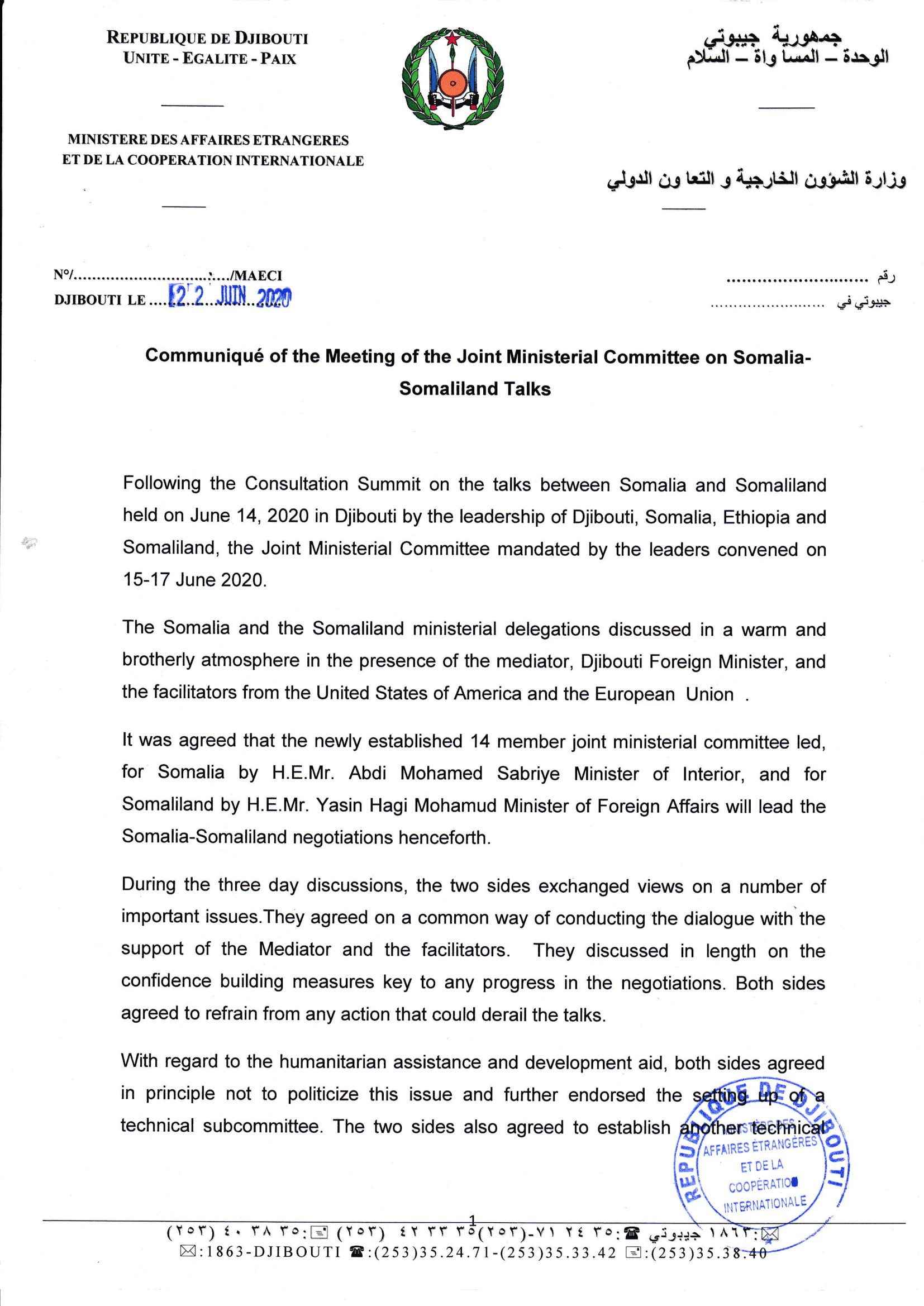 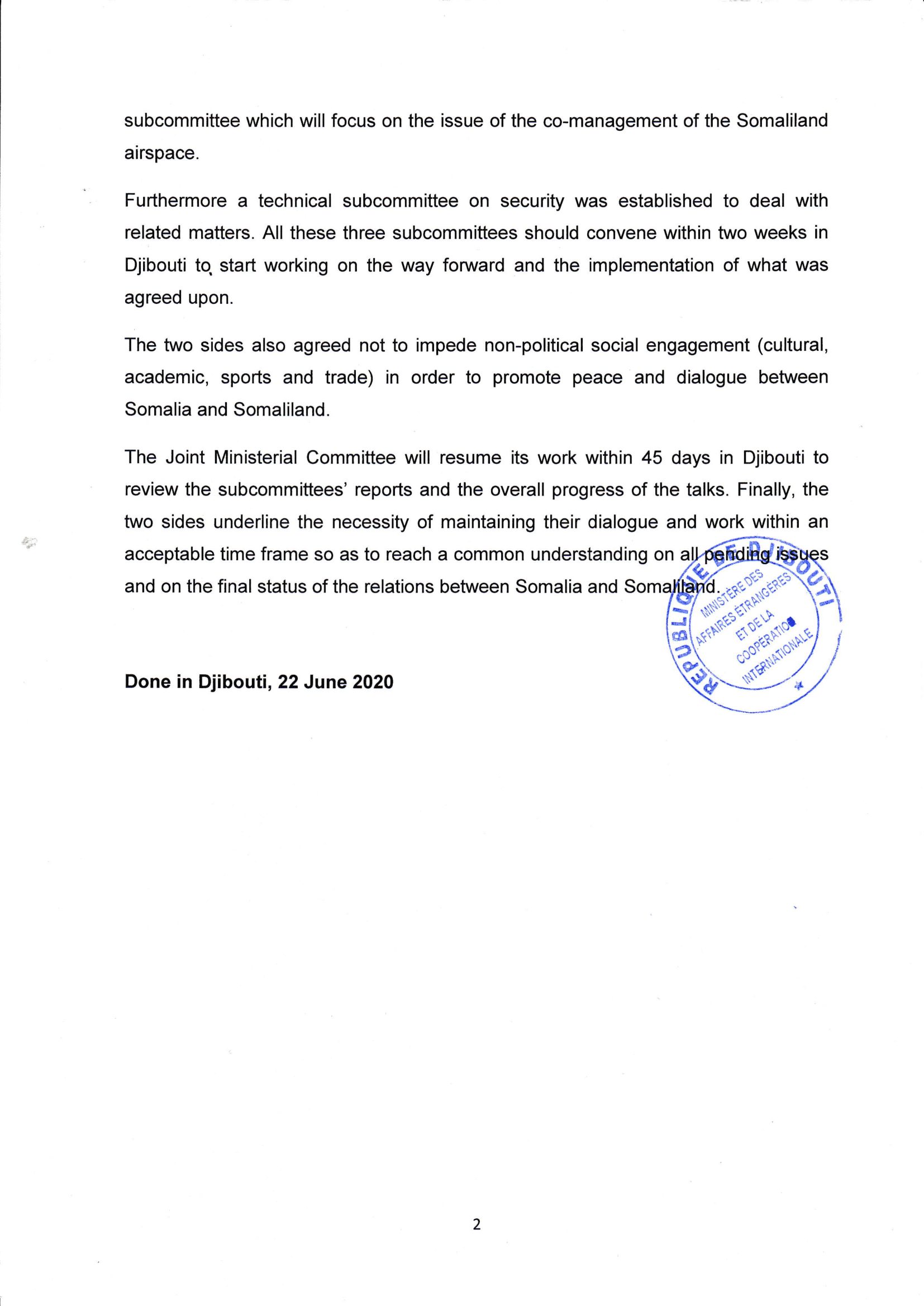 To further show how it spurned the international effort, Mogadishu has turned away a commercial plane flying to Somaliland over Somalia airspace again in direct violation of the non-politicization of aid, investment and development proviso. Using its ill-justified clout the international community has given it, Somalia turned aback several other commercial flights destined for Hargeisa earlier in March.

Villa Somalia also started moves to block a new relationship which brought Somaliland and Taiwan together using China embassies in Mogadishu and Djibouti.

In another ill-advised move, Mogadishu sneaked in to Mogadishu, according to confidential sources,  the Foreign Minister of Gambia, Momodou Tangara, to, ostensibly, reward him for supporting ‘Somalia unity’ during a question-and-answer session at the Gambian Parliament on 1 July 2020. A number of Gambia MPs cornered Mr Tangara on why his country which opted out of a similar ill-fated union with Senegal in 1968, was not at the forefront of countries recognizing the Republic of Somaliland and the right of its people to a restoration of their sovereignty before the merger the same as the Gambia did.