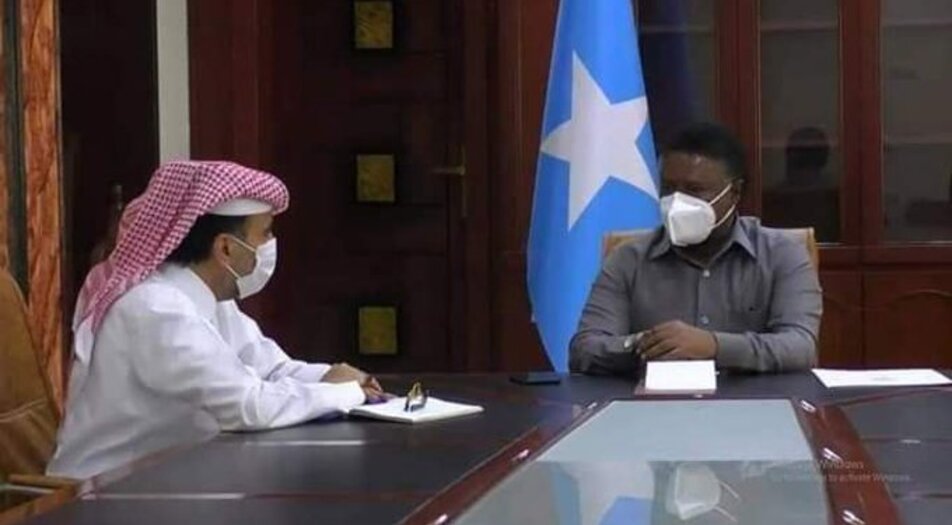 The Qatar ambassador to Somalia Hasan Bin Hamza held a closed-door meeting with Lower House Speaker Mohamed Mursal on Tuesday, with the current pre-election crisis dominating their agenda, but the two did not reveal the outcome of their talks.

Doha, which is one of the chief financiers of Mogadishu’s development activities, has been calling shots albeit behind the scenes and has traditionally struggled to detach its name from allegations of financing terrorism, a claim put forth by opposition bigwigs and other stakeholders.

Hamza, reports indicate, also discussed Somalia’s ties with Qatar besides identifying projects for funding. Qatar has financed a host of projects especially roads and is one of the countries which has often negotiated in Somalia’s tough internal politics, which often degenerates into a war of words.

The meeting came amid criticism from the Senate, which had Mursal accused of working closely with the Federal Government of Somalia to frustrate timely elections in the war-torn nation. Speaker Mursal has been presiding over controversial approval of electoral laws.

In a statement on Tuesday, his Senate counterpart Abdi Hashi Abdullahi, dismissed the approved bills as “unconstitutional”, adding that it’s the Upper House which should have the final say on electoral laws. The Senate speaker insisted that the laws will not be subjected to “declaration”.

Among the issues Somalia’s political players are battling with include the date and model for elections, representations for Banadir and Somaliland in Senate and the 30 percent quota for women representation in Parliament.

The Lower House has already approved 13 seats for Banadir in Senate, a move that irked regional leaders. The region is not part of the federal states of Somalia and hosts the capital, Mogadishu, but has been pushing for representatives in the Upper House.

And in the middle of the devastating crisis, federal-state leaders are set to meet in Dhusamareb, the regional administrative capital of Galmadug on Thursday. Jubaland President Ahmed Madobe on Tuesday called for the removal of Haram’ad police officers from the region ahead of the meeting.

In a statement early this week, Villa Somalia insisted that “the meeting shall come at the right time after all logistics have been put in place”. The statement was in response to criticism after the government failed to convene a consultative meeting on Sunday as communicated earlier on.

It’s not clear if Qatar offered a solution during the meeting with Mursal and Bin Hamza. Last year, Doha was at the epicenter of the meeting between President Mohamed Abdullahi Farmajo and a section of opposition leaders led by former Presidents Sharif Sheikh Ahmed and Hassan Sheikh Mohamud.

Early this week, Somalia commissioned a building funded by Qatar which will be hosting the Ministry of Planning. Gamal Hassan, the minister in charge, hailed Qatar for its continued support for Somalia, adding that Doha “is our crucial development partner”.

“On this historic day, I’d like to express our thanks and gratitude to @qatar_fund for their generous support in rebuilding the ministry. I’d also like to thank everyone who contributed to realizing this remarkable milestone,” he said in a tweet.

Somalia is grappling with brewing political divisions which are engineered by the urge to hold timely elections who had been scheduled for December. But the National Independent Electoral Commission [NIEC] recently ruled out timely elections, setting the earliest date in March 2021.