The three national political parties of Somaliland signed an election timeline that will not go beyond 2020 today, Sunday.

“You see how the three parties have entwined hands to show solidarity on a common stand on elections. We have decided that the twinned parliamentary and municipal elections be held within this year of 2020,” he said.

Faisal prayed that the elections happen in a peaceful, free and fair manner.

“We ask you as the electorate to elect responsible officials worthy of their station,” he said, urging them, also, to register for the elections. 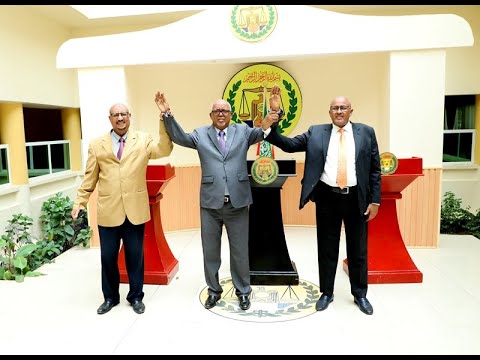 Dr Abdirahman Mohamed Abdullahi ‘Irro’, Waddani Chairman, declared that all obstacles had been removed from the path of the envisaged elections.

“We should all support the electoral process so we can credibly keep our word and hold the elections within the timeframe allocated,” he said.

Engineer Abdirahman Abdulahi Ismail ‘Zeyli’i’, the Vice President of the Republic speaking on behalf of his party, Kulmiye, at the joint press conference the three parties held together, echoed the optimistic view of the opposition leaders.

“Somaliland has earned a name for itself for its impeccable democratic practices and fair elections. This track record should not be further marred by over-extended terms in office of elected bodies,” he said.

The VP urged NEC to draw a workable timetable for the double-laced elections that will not go beyond the year preceded by voter registration.

All three parties hoped that the newly elected electoral commissioners and their technical supporters find a smooth sail in conducting the oft-postponed elections.

The President of the Republic of Somaliland, Musa Bihi Abdi, who still holds on to the Chairmanship of the ruling party, Kulmiye, himself signed for his party while Dr Abdirahman Mohamed Abdullai ‘Irro’, signed for the party he chairs, Waddani, and Engineer Faisal Ali Waraabe for UCID.

The parties gave NEC full support to dispense their duties without fear of further choke issues and interferences as was the case on previous, similarly concluded occasions.

The Somaliland Non-state actors, led by SONSAF, on their part, warmly applauded the consensus the three parties reached.

On the other hand, the non-state actors voiced concern over the existing 20/2005 bill on which the earlier Representatives election was based.

“If this act is used, the quota planned for women will not be honoured as previously promised by the parties during the last election rallies and as approved by the cabinet of ministers on July 2018,” a statement Anwar Warsame, SONSAF, posted on his Facebook page stated.

Article 6 (1) of the agreement specifically stipulates that this particular act will be used to elect the incoming MPs. This stipulation allows for the parliamentary election to take place on time as it pushes the contentious parliamentary seats allocation to a date later than the currently slated elections.

Today’s accord could indeed be historical if the party measure up to their undertaking the transpiration of which could heave a sigh of relief out of frustrated chests among the public, development partners and a friendly international community.