The President of the Federal Somalia State of Hirshabelle, Mohamed Abdi Waare, speaking at the Dhuusamareeb convention of Somalia federal states, Saturday, conceded that the Republic of Somaliland was left no recourse but to strike out on its own.

President Waare took the Somaliland example to expostulate on why Benadir, hosting the Somalia capital, was to be allowed representation at the country’s bicameral parliament.

“We have seen before in history people who had been collectively wronged. At the time the northern regions and the southern regions were coming together (1960), they (Somaliland) brought their government and handed it to us in good faith. The leadership should have been given them wholly to reciprocate their action. We did not even consider it. Only Mohamed Haji Ibrahim Egal alone was accepted on his own volition and personal choice,” he said.

Mohamed Haji Ibrahim Egal was the then Prime Minister of Somaliland during its brief, international recognized independence in 1960. As he led the largest political party – the SNL – in Somaliland, his party forced the unconditional surrender of the people of Somaliland to Italian Somaliland on their day of independence on 1st July 1960. Egal was given the post of a minister along with two other Somalilanders and the top leadership of the executive, the judiciary, the legislative and the security branches were all usurped by the Somalians.

“Again,” President Waare continued, “when the central government collapsed (1991), another government was put in place without so much as looking sideways at them (Somaliland),” he stated. 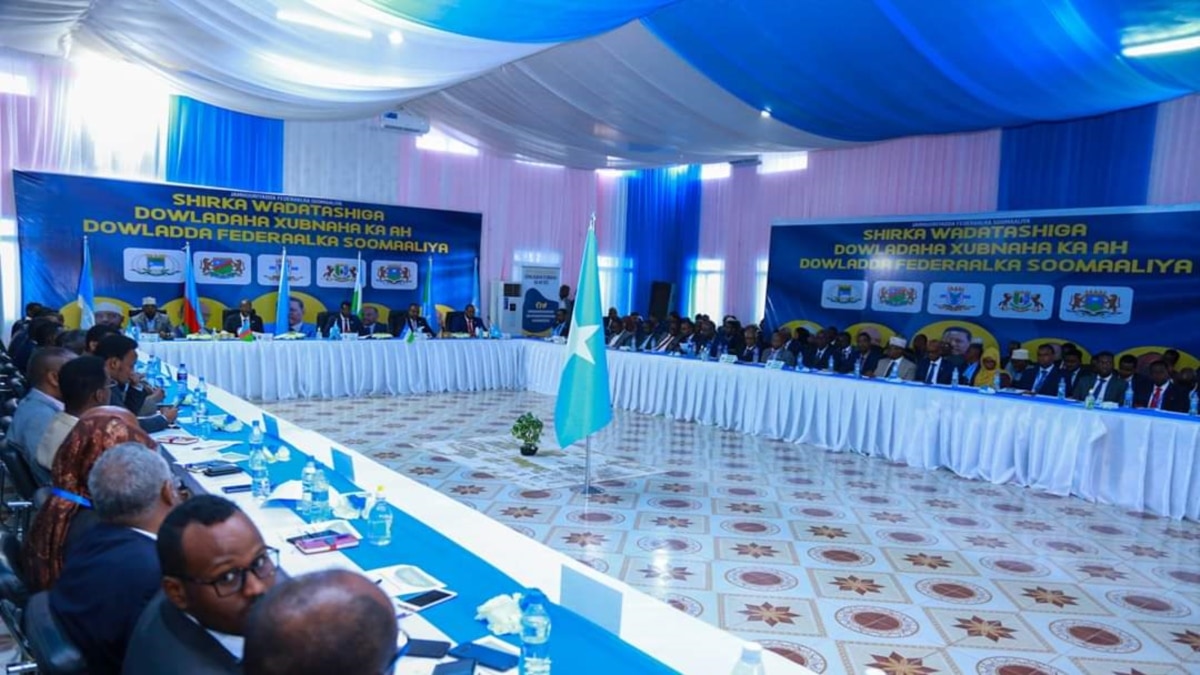 Clarifying areas in the history of present-day Somalia since then to the vast attendance of the Dhuusamareen conference, Mr Waare established that Somaliland had never been a party to the dozens of Somalia reconciliation conferences at no time as it had never participated in any of the subsequent meetings, including the constitutional process, that resulted in the present-day federal system of which the federal member states of which he headed one was a part.

“Of all the reconciliation meetings held, none stopped for a moment to invite its attendance,” he said.

Then he pulled the pin out of the bombshell.

“Aren’t they right to withdraw and hold on to the reaffirmation of their sovereignty? Or are they not?” He asked the conference participants, including his fellow presidents of the other four federal states of Somalia, namely: Puntland, Southwest, Jubaland and the hosting state, Galmudug.

The federal president’s words come at a time when the young federal leaders at Villa Somalia and their federal parliament is still intentionally ignoring the thirty-year-old reality of Somaliland after 1991 and that before 1960 as a Protectorate of the British monarchy. The federal parliament has recently passed an electoral law which allows Somaliland MPs to be selected in Mogadishu where the rest of Somalia was planning to hold its first one-person, one-vote election – hopefully – before 2020 comes to an end or early next year.

In contrast, Somaliland held several elections and voting processes upon which three presidents, a parliament and 2 Municipal councils were elected, and the constitution voted for on one-person, one-vote processes.

The five federal Somalia member states who are currently seated in Dhuusamareeb are signatories to the international community established a federal Somalia system. They drove out the federal government and its security personnel from Dhuusamareen of Galmudug State to confer on issues paramount to the states’ future among themselves without federal government interference and possible destabilization.

The conference came underway on Saturday.