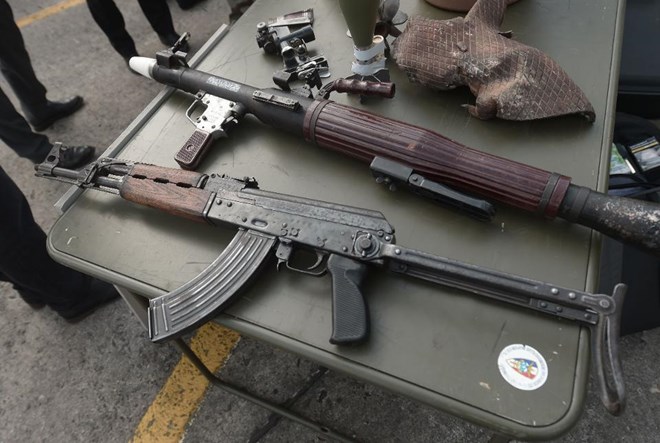 The U.S. Army wants to acquire arms designed by the Soviet Union, that can be used by American allies who use such equipment today. This includes “ammunition and weapon items produced and used by the Former Soviet Union (FSU) or Eastern Bloc countries,” according to a new contract announcement.

These items “cannot be procured through the Army supply system,” the announcement helpfully notes. The eventual goal is to award a five-year contract – scheduled to run from 2022 to 2026 — to manufacture munitions that will be delivered U.S. and overseas locations.

The Soviet Union became a historical footnote 30 years ago. Yet perhaps the Soviet empire’s most enduring legacy is the colossal amounts of arms that it supplied to its Eastern European satellites, Third World governments, and assorted guerrillas and terrorists. There are also many nations, such as China and Bulgaria, that produce and export Soviet-designed weapons. Eastern  European-made rifles, artillery and tanks have ended up in the front lines of conflicts like the Syrian civil war.

But obtaining Soviet-designed munitions may not so easy. The U.S. Army presentation notes the challenges include “limited sources of supply” and the reluctance of some European nations to allow these munitions to transit through their territory.

Interestingly, another obstacle is that some suppliers might be too politically unsavory for Washington to do business with: “Previously acceptable suppliers may no longer be allowed (may be sanctioned),” the U.S. Army warns. The Army will also test the munitions to ensure they meet specifications.

The idea of using foreign weapons isn’t exactly new. Intelligence agencies and special forces around the world have long used foreign weapons during covert operations, to preserve deniability. In 2017, U.S. Special Operations Command sought U.S. manufacturers to build Soviet-era heavy and light machine guns that could be supplied to U.S. allies. Russian defense manufacturers have denounced such plans as theft, despite’s Russia history of copying Western-designed weapons such as the B-29 bomber. Russian arms makers have also blasted China for copying their products.

Why would the U.S. want to acquire Soviet-era arms for its allies, instead of sending them American weapons? The answer is simple convenience. Many governments and groups that the U.S. supports, especially in the Middle East and Africa, have used Soviet equipment for years.

Modern U.S. arms would arguably be superior to old Cold War designs. But they would be more complicated, maintenance-intensive and would require retraining customers to use Western-style equipment. The AK-47 and RPG-7 may be old designs, but they’re rugged, reliable and combatants from Nicaragua to Somalia to Syria know how to use them.

Why reinvent the Kalashnikov?