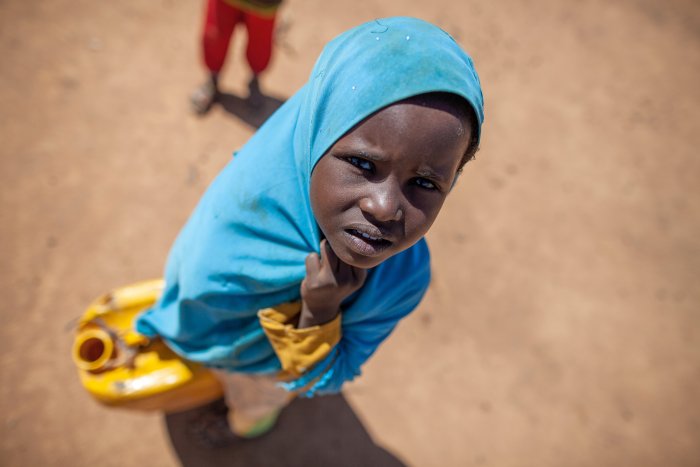 Here on the frontlines of climate change, rising temperatures and changing weather have caused devastating floods, droughts and locust swarms. Together they are part of a climate crisis forcing people from their homes, threatening widespread hunger and unemployment and exacerbating conflict over scarce resources.

In Somaliland, water is life. With support from the United Nations Development Programme (UNDP) and funding from the Global Environment Facility Least Developed Countries Fund, the government of Somaliland has helped farmers like Fardosa Mohamed get access to water for drinking, cooking and watering livestock. It’s a vital resource for Fardosa and her family – and now also key to slowing the spread of COVID-19 by making it easier to wash hands and clean household items.

The Enhancing Climate Resilience of the Vulnerable Communities and Ecosystems project, which ran from 2014-2019, constructed 150 water-harvesting facilities, including this 50,000-cubic-meter dam in Baligubadle.

The Baligubadle dam provides safe water access for an estimated 10,000 people in the region. For Fardosa, it means she no longer needs to travel three hours to Hargeisa, Somaliland, to get water. It also means she can keep her livestock healthy in extreme conditions.

Before the dam, people weren’t so lucky, and many lost their livestock in prolonged droughts that have ravaged the region and pushed thousands from the countryside and into the cities.

Lack of access to clean water is putting millions of people worldwide at risk and allowing diseases like COVID-19 to spread faster in poor communities. In Africa, as many as 115 people die every hour from diseases linked to poor sanitation, poor hygiene and contaminated water. Since 2008, UNDP has supported 1.4 million people with increased access to drinking water and provided support to improve local farming and business opportunities for 80 million.

Approximately 70 percent of Somalis rely on agriculture and pastoralism for their livelihoods. Droughts, floods, the loss of gulleys to erosion and the felling of trees for charcoal production put these vulnerable groups at risk. With ever fewer ways to make a living in the countryside, migration to towns and cities has swelled Internally Displaced People (IDP) camps and slum settlements, where people live in crowded and unsanitary conditions. This is particularly true for young people, who are less willing to settle for the increasing poverty and limited options of rural communities.

With support from UNDP and the GEF, over 100,000 households now have more reliable access to water provided by nearly 800 dams, dykes, storage tanks and other projects. Of these, 56,000 are run by women, since the men in pastoral communities can be away with their animals for more than a year at a time.

The project also helped 46,000 households to improve how they farm, for example by introducing hydroponic systems and improved seeds and by showing farmers how to construct small bunds that can help the land retain more water, allowing new crops to be grown in areas that were previously too dry.

To protect the environment, the project supported government reforestation of areas where trees had been lost to climate change or cut down for charcoal; helped famers grow fodder for their animals to prevent over-grazing, and supported local retailers (mostly women) to introduce liquified petroleum gas into local markets in several cities, reducing reliance on charcoal.

The project also collaborated with the UN Office for the Coordination of Humanitarian Affairs (OCHA) to set up drought operation centres. These provide SMS warnings for cyclones and other extreme weather events to towns and villages, including in remote areas. The messages are sent to key local figures, such as prayer leaders or the heads of women’s groups, who then pass them on through their own networks.

To raise awareness of how climate change affects local life and how farmers can respond to protect their crops and animals – the project ran poster and billboard campaigns as well as training sessions for local figures who passed this new knowledge on to their neighbours.

To help create the leaders of the future, the project developed a Master’s programme on climate change and environmental and natural resources management and funded scholarships for almost 30 students .

More than 50,000 people also took part in community trainings on hydroponics, the use of new seeds and other ways of farming that work better in the face of climate change.

“Water brings beauty to life. That’s what we live for.”
– Fardosa Mohamed