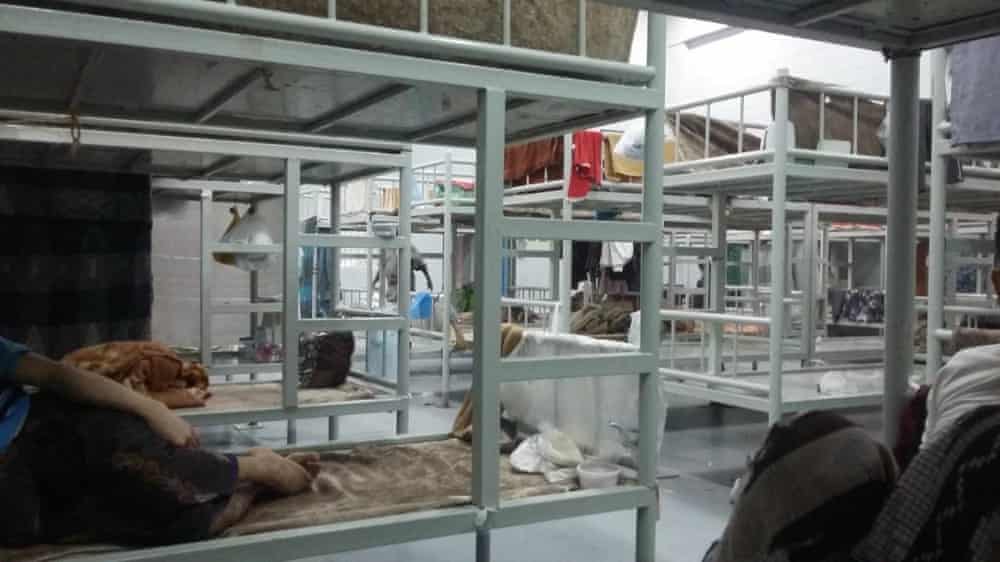 Ibraahin’s* first week of work at a market in Jeddah, Saudi Arabia, was also his last. As the sun set on the fifth day, the police descended upon the crowds and rounded up the 40-year-old Somali, along with several other undocumented migrant workers. They were transported to the nearby al-Shumaisi detention centre where many, including Ibraahin, remain months later, awaiting deportation.

Saudi authorities regularly arrest those found to be working illegally in the kingdom without a visa. Many are held in al-Shumaisi, a huge complex designed to hold 32,000 inmates. It has four grey-walled wings for male inmates, two for females and one for children. Detainees are held in a crowded series of bunk bed-filled halls, which each hold around 80 people.

Smartphones are confiscated from the migrant workers when they arrive, preventing them from documenting their living conditions, several inmates interviewed have said.

There are sick people, fever, vomiting and coughing, and nobody taking care of them

The coronavirus pandemic has brought fresh anguish. Detainees are fearful of catching Covid-19 because of the cramped and insanitary living conditions. Ibraahin says some people in his room are sick, but there is no way to tell if they have the virus as they don’t have access to healthcare.

“There are sick people, fever, vomiting and coughing, and nobody taking care of them,” adds his cellmate, Tahiil *, 30. “It is possible they have Covid-19. The hospital here is closed.”

In April, Human Rights Watch (HRW) called on Gulf countries to provide alternatives to detention for deportees during the Covid-19 pandemic, due to the high risk of infection in crowded institutions.

In Saudi Arabia, detainees often don’t know how long they will be kept at the centres, or what charges have been levelled against them.

“In a time of increased dangers from Covid-19, Saudi Arabia should move beyond small-scale detainee releases and take real steps to overhaul these detention centres and rethink its mass deportation policy.”

Tahiil, also from Somalia, was arrested for being undocumented while working as a camel shepherd. His wages were confiscated and he does not know if he will get the money back.

He says inmates do not receive enough food. “We are given bread and very little rice. Dry rice and no protein. The food they provide is of bad quality. There are no lemons, no vegetables.”

Ibraahin and Tahiil said that when they were arrested the police asked for bribes and said they would be released if they paid.

“If you have money and give the bribe, nobody will take you to jail,” says Ibraahin.

The two men say they travelled to Saudi Arabia to flee al-Shabaab bombings and other terrorist attacks in Somalia, and enjoy a better life.

According to the UN, more than 138,000 east African migrants take the hazardous journey across the Gulf of Aden to Yemen every year, making it the busiest maritime migration path on earth.

Those who survive the crossing travel north, in the hope of reaching oil-rich Saudi Arabia to find manual work. However, most are unaware of the danger they face. Yemen is in the midst of war, and the UN’s International Organization for Migration (IOM) warns that migrant workers face kidnapping, torture for ransom, exploitation and trafficking.

Once working in the Kingdom, those without visas have to constantly look over their shoulders to avoid arrest.

Fawzia*, 51, lived in Jeddah illegally from 1990 to 2018, when she was deported back to Somalia. During her time there she worked as a family housemaid. She also gave birth to five children, at home, with no access to healthcare. Her children were undocumented and grew up hiding at home, unable to go to school.

“We were lucky to have stayed that long without being caught. We used to hide every time the authorities came to the neighbourhood looking for illegal migrants,” says Fawzia, over WhatsApp. “One night, we ran from our home due to fear.”

Two years ago, when the Saudi government began to crack down on illegal migrants, Fawzia decided to turn herself and her family in for deportation, for fear of being branded a criminal.

To avoid spending a long period of time in detention, Fawzia paid a bribe. They were deported to Mogadishu a week later.

“You have to pay a bribe if you want to go back to Somalia in peace. I was told not to tell anyone about it,” she says. “The police asked for $500 and we reached a deal of $125, to facilitate a safe and easy deportation.”

The Saudi Arabian government’s Centre for International Communication (CIC) did not respond to a request from the Guardian for comment.

Photographing the Pandemic: How Covid-19 Created a Humanitarian Crisis in Somalia