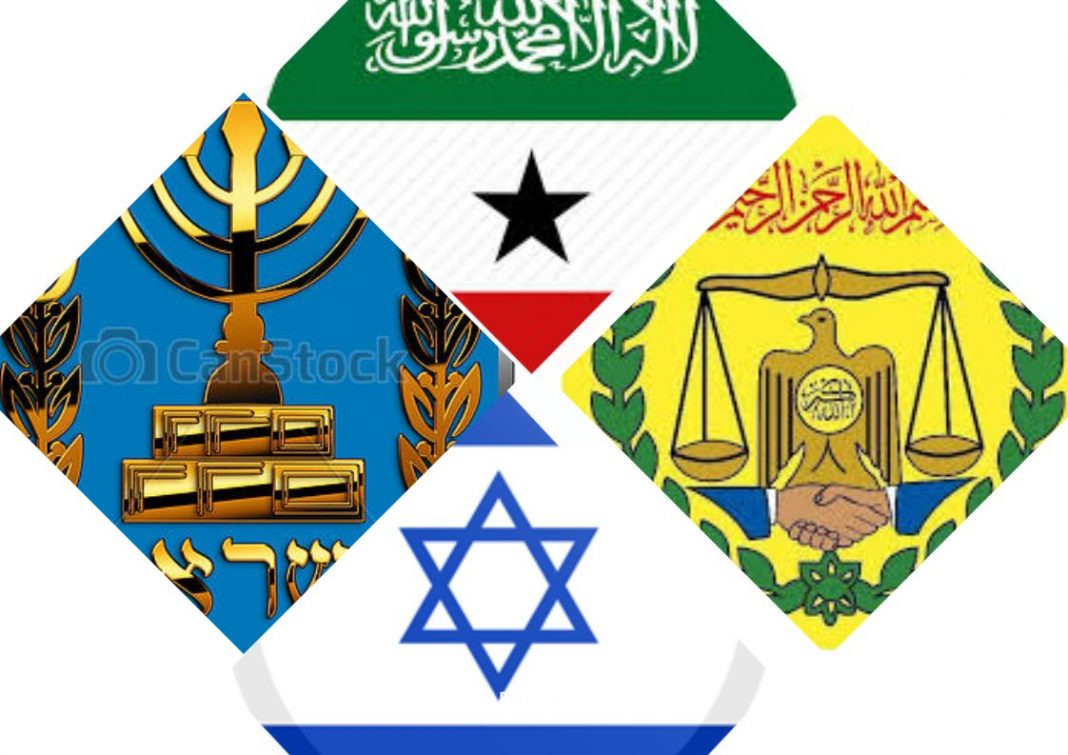 Israeli intelligence director Eli Cohen (has) said in an interview with Army Radio that Israel was entering into a peace deal with two countries, one in the Horn of Africa (HoA) and one not far from the Horn of Africa.

Asked by Army Radio if the two countries were Somaliland and Sudan, one of which
was reported by the Jerusalem Post today, Mr. Cohen replied that he would name the
two countries when end(ing) the tripartite agreement.

Israel and Sudan may sign a normalization deal in the near future, Israel’s intelligence
minister said Sunday.

“A normalization agreement with Sudan is coming soon. This historical agreement may
be signed before the new year,” Eli Cohen told KAN, the Israeli Public Broadcasting
Corporation, in the wake of last week’s controversial deal with the United Arab Emirates
(UAE).

The UAE is the first Gulf state and third Arab nation to establish full diplomatic relations
with Israel after Egypt and Jordan.

Despite reports that the deal halted Israel’s controversial plan to annex parts of the
West Bank, Israeli Prime Minister Benjamin Netanyahu confirmed his government’s
continued commitment to the annexation plan.

Less than a week after the UAE and Israel announced their historic deal that will
normalise relations between the Arab country and the self-declared Jewish state, Israeli
Minister of Intelligence Eli Cohen said that Sudan is expected to follow in the UAE’s
footsteps.

“There will be, this year, an additional [agreement] with an African country, in my
estimation Sudan, that will also sign a peace agreement with the State of Israel,” Israeli
news website Times of Israel quoted Cohen as saying.

The Israeli official’s statements came in an interview with Channel 13.

Egypt was the first Arab state to sign a peace deal and normalise ties with Israel in
1979, under then-President Anwar Sadat, who was subsequently assassinated by
militants in 1981.

The UAE is only the fourth Arab state after Egypt, Jordan and Mauritania to establish
ties with Israel. The latter however later halted relations in response to the occupation
state’s 2014 war on Gaza.

The Red Sea has long represented a critical link in a network of global waterways
stretching from the Mediterranean to the Indian Ocean to the Pacific—a strategic and
economic thoroughfare one U.S. defense official dubbed the “Interstate-95 of the
planet.”

Prized by conquerors from Alexander to Napoleon, the Red Sea’s centrality to
maritime trade and its chokepoints have for centuries made it a subject of keen
geopolitical interest.

But a new kind of rivalry has emerged in recent years, sparking a season of unprecedented geopolitical competition astride the Red Sea, as the boundaries of the two regions it enjoins—the Arabian Gulf and the Horn of Africa—are fast disappearing.

Driving the action have been resource-rich Gulf states, whose expanding notions of
their near-abroad have yielded projections of influence across ever-greater swathes of
land and sea.

The map includes Yemen, home to one of the world’s deadliest wars, and
the Horn of Africa, host to three extraordinarily delicate political transitions. In each, Gulf states and Middle Eastern rivals—embroiled in rancorous struggles for regional
supremacy—have jockeyed for access, clients and influence.

Changing trans-regional dynamics have also been animated by migration and refugee
flows that top global indices, a combined population greater than that of the United
States, and the establishment of China’s first-ever overseas naval base at the Red
Sea’s southern gate.

Geoeconomics have also figured prominently: In addition to the $700 billion of seaborne commerce that already traverses the route each year, Beijing’s new maritime silk road, Africa’s rising consumer classes, and hydrocarbon finds in the Horn have been subjects of chatter among powerbrokers in the region and beyond. So too are the deep-water ports, roads, and railways needed to make such a network tick.

After 30 months of action, the initial rush for influence appears to have run its course.

Red Sea protagonists are now reflecting on their interventions to date and taking stock
of the modified land-and seascape. As they consider their next moves, here’s a recap of
events and a look at six plotlines that will shape the next season of Red Sea
geopolitics—for better or worse.

The history of the Gulf and the Horn can be understood partly in dichotomy, with
contrasting notions of the Red Sea as a feature of union or division.

While people and states have interacted across this narrow seaway for generations, global trends—rising inequality, shifting centers of power, increasing migration, popular demands for democracy and a great maritime trade contest—are blurring boundaries across the Red Sea as never before. The emergent transregional order, whether cooperative or competitive, will demand our sustained attention.

Consider Somaliland, a breakaway region of Somalia which borders Djibouti and
controls 460-miles of coast along the Gulf of Aden.

While Somalia descended into chaos in 1991, the northern clans in Somaliland restored peace throughout the region which accounts for about 30 percent of Somalia’s territory.

That peace has not come cheap: While the region has very few natural resources—livestock is its major export – it continues to spend one-third of its $350 million budget on security and defense.

Recruits to its 15,000-man army or small coast guard must purchase their own
weapons.

Such figures—almost entirely generated locally through customs and taxation—are a pittance compared to the foreign and military aid offered Somalia. In addition, the U.S. spends $70 million annually to rent facilities in Camp Lemonnier, the headquarters of Combined Joint Task Force – Horn of Africa (CJTF-HOA) and is spending many times that amount to upgrade its facilities.

Somaliland’s security priorities correspond with those of the United States: It seeks to
deny its territory to Al-Shabaab and other terrorist groups and, to date, have been
successful, despite the hostility of terrain along their border with Somalia.

Sweden recently donated three boats to the Somaliland coast guard, which they now use to patrol the coast to deter weapons smuggling from Yemen. Local officials brag there has not been a single instance of piracy launched from Somaliland’s territory, even though Puntland, the Somali region adjacent to Somaliland, became its epicenter.

While both Somaliland political and military authorities have said over the course of a
week’s visit that they would welcome any U.S. assistance, their top priority is merely a
liaison to help coordinate anti-Shabaab, anti-weapons smuggling, and anti-piracy
efforts.

U.S. policy, however, has been to shun Somaliland to augment the fiction of Somali
unity. “The U.S. response to the challenges in Somalia has been to work with the
Federal Government and the Federal Member state administrations, in coordination with the African Union, the United Nations, and other partners working toward a common goal: to support Somali-led efforts to stabilize and rebuild their country along democratic and federal lines,” a November 2017 AFRICOM public affairs article states.

The problem is that while Somaliland is a federal Somali state, in theory, it is not one in
practice.

Authorities in Mogadishu appointed a parliament in 2012, seven years after Somaliland elected theirs.

Those appointed to represent Somaliland do not live in the region, nor do they have popular legitimacy or the ability to influence events on the ground.

The State Department and UN defer to the African Union which is loath to draw new
borders in Africa.

That diplomatic debate might be valid (though Somalilanders note their borders are well defined by treaties dating back more than a century when the British established a protectorate and confirmed in 1960 when more than 30 countries recognized Somaliland’s independence), but there is no reason why that debate must come at the expense of vital U.S. national interests.

Turkey, Ethiopia, Djibouti, and Kenya maintain consulates in Hargeisa, Somaliland’s capital. Denmark has an office, and Kenya will soon open theirs. The Spanish navy has conducted exercises with Somaliland’s coast guard, and the United Arab Emirates has leased a base in Berbera, where U.S. forces once operated during the Cold War. None of these countries nor the African Union interpret their involvement as undermining broader diplomatic policies or bestowing formal recognition of its independence.

Nor is the U.S. refusal to liaise with Somaliland consistent with other corollary trouble
spots. The United States no longer recognizes Taiwan, but it maintains ties to the
strategic island through the American Institute in Taiwan.

Prior to Operation Iraqi Freedom, the CIA and U.S. Special Forces established links to Iraqi Kurds, even though Washington did not formally recognize their government. Both the CIA and U.S. military also have trained and conducted liaison functions with Palestinian security services despite the lack of formal recognition of Palestinian statehood. Most recently, U.S. forces partnered with Syrian Kurds to combat a common enemy.

While National Security Advisor John Bolton on December 13, 2018 said that “countering the threat from Radical Islamic Terrorism and violent conflict” remains a vital pillar of the Trump administration’s Africa policy, the failure even to coordinate with those controlling key territory against Al-Shaabab, pirates, and weapons smugglers suggests that, while the Pentagon is willing to spend money, AFRICOM is not prepared to win.