Home World News/International Africa Horn of Africa at Crossroads: Fragility in Domestic Politics and Tradeoffs in... 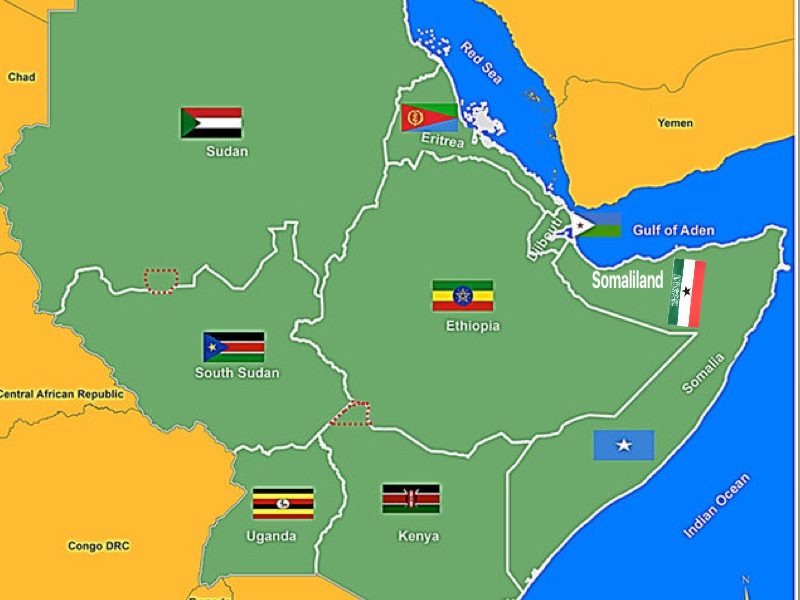 The colossal rivalry between numerous international and global actors foisted on the Horn of Africa region, at present, due to geostrategic interests can only fuel more interstate and intrastate conflicts in the foreseeable future.

Regional actors did not build the congruent voices and regional cooperation necessary against the unyielding and exploitive approaches underway within the region.

The advent of these diluting approaches and paradoxical rivalries were concomitantly seen after the geopolitical strategic interests within the region gratuitously enchanted the world powers. The increasingly regional polarization and perennial conflicts at both interstate and intrastate levels swamped the regional restoration of peace and security.

The concerned metropolitan actors and powers in the region made a blatant attempt to the reconfiguration of the political, security, and economic landscape in the region.  The internal fission between regional states’ interests widely stimulated the attrition of political faith among these states.   The attempts did not contribute a glimpse of hope to regional aspirations. Instead, they distorted the existing tradition of political status quo.

Despite, the contesting external actors, the Horn of Africa region is today falling apart due to some underlying issues including interstate conflicts, unbearable ethnic tensions, and violence, electoral disputes, and elections delays, shortcomings of political pluralism, human rights violations, and degeneration of the freedom of expression and press.

The Horn of Africa region is characterized by poor governance and stalling democratic practices, where authoritarian regimes and one-party systems dominate the political arena letting in contending external actors and proxy political activities to germinate fresh challenges in the region.

Concurrently, the interminable, debilitating issues in the region have slowed down growth in the region and political stability which signaled to external actors to intercede in these issues with a stonewalled manner disregarding the fact that these multifarious external actors and institutions, themselves, had no attuned vision except the employment of plenty espionage and covert operations in the region.

Pertinent and Persistent Domestic issues in the Region

The most fundamental and challenging matter is the land dispute that has prompted both the interstate and intrastate conflicts. The Horn of Africa region now has become in the oasis of violent conflicts, civil wars, ethnic clashes, and remains constantly underdeveloped.

The most erroneous matter we inherited from the colony is a territorial demarcation that revealed the transgression of the ethnic groups and the subsequent ambivalence of state commitments only further exacerbated cross-border conflicts created mostly by divided ethnic groups clashing with other equally divided groups.

The territorial disputes within and between states and the accumulation of problems caused by these disputes are at the core of drivers of all other problems in the region. For instance, within the states, the ethnic conflicts underway in Ethiopia, Sudan, South Sudan, Djibouti, Kenya, Uganda, and Eritrea are inconceivable, and not admissible. Somaliland and Somalia clans’ conflicts are rampant and thwarted peace, security, and political stability. In countries such as Ethiopia, Sudan, and South Sudan, the magnitude of the ethnic conflicts are calamitous and has become a pernicious element.

In recent years, the Ethiopia ethnic tensions as Oromo versus Somali, or Oromo versus Amhara among others have endangered regional peace and security. In South Sudan, clan rivalries vying for area controls was oft quoted as a major factor in the President Kiir-Machar frequent standoffs. Somalia is another classical example. For the past 30 years, Somalia was under clan-instigated conflicts and political turmoil  which, ultimately necessitated the deployment of peacekeeping troops, and incessant terrorism and insurgencies.

The clans’ conflicts over the power search and land grappling have mired the state-building of Somalia into a tremendous conundrum. In contrast, Somaliland has succeeded in its peacemaking efforts and state-building but the clans’ conflicts over the land, water resources, and grazing areas have still major effects on the peace and security in the country.

Eritrea, Djibouti, and Uganda political systems made successful attempts to deflate these ethnic aggressions but, still, there are disparities and internal grievances in dispersion which can potentially reignite sub-surface tensions. In other words, as long as the rotating leadership through a democratic manner is missing, the ethnic salient issues would remain persuasive and insidious.

Kenya ethnic tensions and violent conflicts are mostly linked to the elections such that of 2007 elections. Kenya, however, has not experienced conventional civil wars and had been able to contain incendiary situations deteriorating to clan confrontations. Kenya is more open and democratic in contrast to many states in the region. Somaliland is, to its credits, also, ranked as a leading democratic state in the region because of the multiparty political system, free press, and the holding of competitive elections.

However, most states in the region have allegedly cultivated neopatrimonialist political systems, which means, these states created a form of political loyalty or social spheres that few people, either ethnic or clans benefit the national resources through monopoly and nepotism manner.

This has blurred the overall co-existence of ethnic groups or communities by exacerbating the structural conflicts, political uncertainties, instabilities ultimately ending with a destructive corollary. Some commentators argue that such a neo-patrimonialist political system is a foundation of an overall socioeconomic and political backwardness in the Horn of Africa or Africa in general.

Questionable Shifts in the Horn

The Ethiopia and Eritrea peace accord was highly welcomed throughout the region and beyond. This was the first Ethiopia new Prime Minister Dr. Abiy Ahmed testimony for coming up with unusual leadership. Although, the Eritrea authoritarian regime benefited from this pact and arms with embargos lifted, the people to people and trade relations between Ethiopia and Eritrea did not flourish as anticipated. Observers point out for PM Abiy to isolate the Tigray region and the Tigray People’s Liberation Front (TPLF) is not in harmony with him to handing over a disputed territory to Eritrea which brings the PM’s motivation in either development to question.

The Horn of Africa region is, to note, now pursuing uncommon new alliances that fomented and heightened the tensions between regional states. Forming this new alliance within the IGAD region like Ethiopia, Somalia, and Eritrea, there are several inquiries the first inquiry is: why these three countries created a new love among themselves while demonstrating animosity with others in the region? The second inquiry questions if the deal foreign-driven with a view to interests that do not augur well for other states in the region.

First, this capricious alliance of Ethiopia, Somalia, and Eritrea has potential, unwelcoming political features with the rest of the region seeing it as a vacillating and uncalculated decision that can undermine the spirit and dream of the regional economic integration and trade cooperation. This may also trigger some malicious factors that exacerbate the existing political and economic vulnerability in the region. The political narrative behind this new regional block seems to be egregious to any reinvigoration of regional cooperation.

Second, there are a lot of speculations and assumptions surrounding this alliance because the Horn of Africa region is now the target of inimical external actors. The US versus China is at the pinnacle of the renewed attention to the Horn since fresh geopolitical alterations in the Horn of Africa region transpired particularly between Ethiopia, on one side and Sudan and Egypt on the other.

Wrestle for Influence and Resources?

In the new regional alliances, some diplomatic sources vindicate that this wrestle of the geopolitical contest was envisioned to pave the way to abrogate and halt of the China sphere of influence in the region, though, China economic activities are more profound and mainstream in the region through debt trap and loan investments The US, to stem the encroaching takeover of China,  started investing in mutinies against China interest in the region, on the one hand, and show of alliance to a number of states in the region, on the other.

Subsequently increasing proxy wars over the Nile waters between upstream and downstream countries face complex conditions. The African Union waning role to accomplish some acceptable political grounds is observable, and this issues of Nile waters require multilayered efforts beyond the region, as one in which the US has been shuttling in recent months. The fight over the Nile waters particularly Ethiopia and Egypt has an adverse connotation in the regional development cooperation.

On the other hand, Somaliland and Taiwan’s recent diplomatic relationship has had its own thoughtful measures of building a friendship and mutual cooperation. Nonetheless, China sees that the Republic of Somaliland has openly rejected the one-China policy by allying itself with Taiwan. China’s approaches to Somaliland came concurrently after Taiwan arrived in the region – an apparent attempt to reverse the decision of an unbudgeable Somaliland.

By Mohamed A. Mohamoud – Barawani

Mohamed is a Public Policy Specialist, Expert in the Fragile States, Civil Society, Governance and Elections  and a Former SONSAF Executive Director