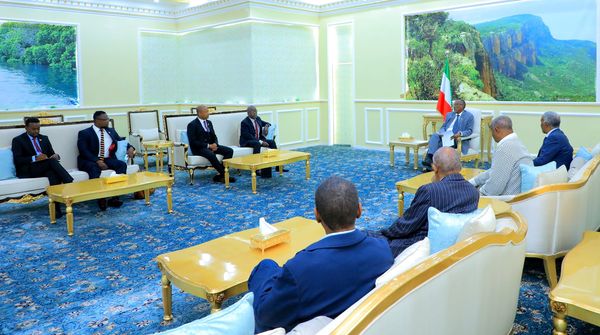 His Excellency the President of the Republic of Somaliland, Musa Bihi Abdi, Monday, received at his office a South African parties delegation comprising high officials of the South African ANC, SACP led by Mhlekwa Nxumalo.

The South Africa delegation arrived about the same time as the Malawian delegation’s but took time to conduct side meetings and tours before their meeting with the President.

South Africa is one of a handful of countries in the African continent which had shown keen interest in the Somaliland cause since the beginning.

Other countries that had been intrepid enough to realize what the continent was missing in a sovereign Somaliland state included Guinea Conakry, The Gambia, Kenya and Malawi.

The South African delegation’s visit coincides with a diplomatically packed week for Somaliland.

President Bihi returned from a fruitful, highly-accoladed state visit to the Republic of Kenya on Wednesday. He received Eisenhower Mkaka, the Foreign Minister of the Southeastern African Republic of Malawi on Saturday. Again, on the same say, the President met with the Ambassador of Taiwan to the Republic of Somaliland, Amb. Allen Chen-Hwa Lou.

in 1991, the Republic of Somaliland restored an internationally recognized sovereignty it lost a thoughtless merger with Italian Somalia in 1960 in anticipation of the building of a Greater Somali republic including Djibouti, and large chunks of present-day Kenya and Ethiopia – which never materialized.

For thirty years its people suffered persecution under Somalia-dominated administrations as no other African nation did.

For thirty more years, to date, it suffered more with an insouciant world putting nearly 6 million Somalilanders in dire danger, denying them development, multilateral agreements, access to international financing, rightful seats in regional and international bodies, and virtually placing them at the mercy of a Somalia that has no legally-binding hold over it.

Presently, the world appears to be waking up to the mistake that is failed Somalia which it prefered over a successful, maturer Somaliland.