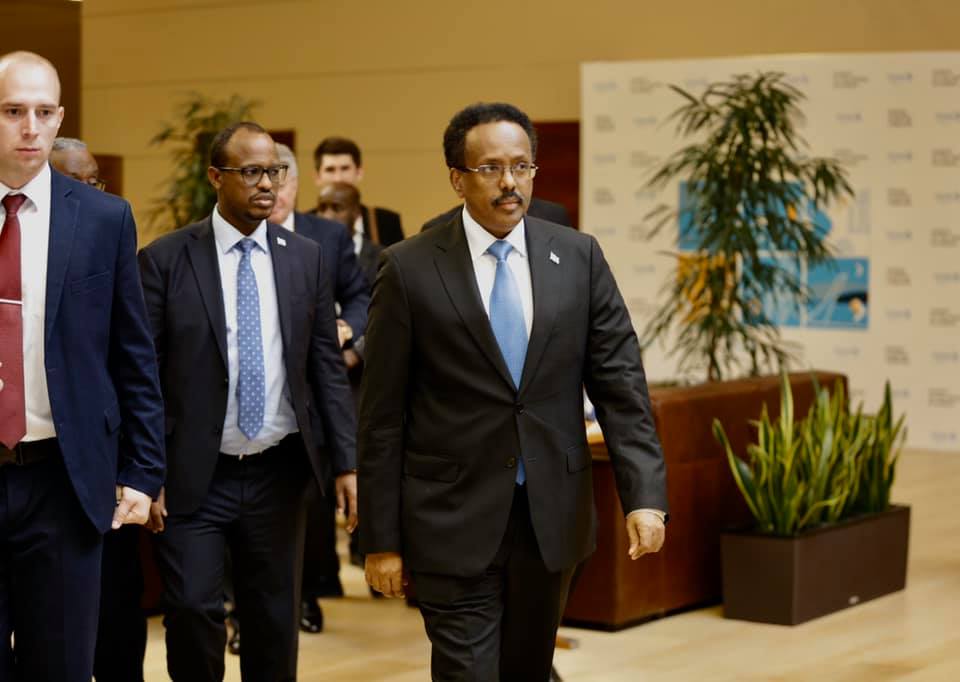 Facebook
Twitter
Pinterest
WhatsApp
Somalia once again faces a serious political crisis which is likely to reignite a renewed civil war. The country has been painstakingly rebuilding its institutions with the help of funds and expertise from the International Community.  After a long civil strive, the Somali people chose a federal system and a tailored draft constitution for that purpose.
There are six regional states in the federal system; (Puntland, Jubaland,  Galmudug  Hirshabelle and South West and Somaliland which are represented by unionist politicians.) They are supposed to work together and form an ideal Federal Government of Somalia.
Let me distract the reader a bit in order for him/her to see a clearer picture. Banadir region, (Mogadishu) is missing from the picture of this federalism. Whether it is by design or default, Banadir is the most populous and wealthiest region in the country even though it has been given so-called special status as the capital city, in reality, it does not have any political clout or representation in the federal system. There is no benefit for Banadir in this setup but only receives trouble. It is self-evident that people of the region have sacrificed a lot to Somali state-building and they feel they are not rewarded appropriately.
Back to the main point, all that combined effort of Somalis and non- Somalis are likely to crumble, if the agreed draft constitution is allowed to become useless or institutions are destroyed before our eyes.
No one is saying the draft constitution perfect, but it has worked up to now to bring about some form of functioning government and stability. The people who organised on this experimental project set up a temporary formula to share the representation of the government through the four-point-five model ( four main clans and minorities). They knew it was not right but a form of acceptable compromise. Successive administrations worked and respected that model because they thought it was leading a stable and functioning government. All that work has been compromised and things are falling apart if a political solution is not found in time.
There are serious accusations against the current administration led by president Farmaajo that can not be ignored. He mixed up the clearly defined roles of the fragile Somali institutions that led eventually to undermine the role of the parliament. The time of the draft constitution is expiring at end of this month and it should be extended before the time of sitting parliaments runs out. Otherwise, the country will be soon without a constitution or a madness sets in to dissolve the parliament.
The former president, Hassan Sheikh Mohamud had written to the leadership to compete for that ongoing work. Instead, the president refused the two houses of parliament to meet and do this necessary business for the national interest. At the top of that, he issued a decree deferring their work to the next parliament. The president knows that he should NOT have done that because it is not part of his duty according to the constitution. His action will lead the institutions to collapse if not corrected before the tenure of this parliament.
Analysts believe the reason for this intervention at this time shows how the Somali institutions are dysfunctional. That is why the leader of Upper House  Abdi Hashi came out publicly and denounced the interference of the president in the affairs of the legislature. The council of the presidential candidates( the opposition groups) added their voice the unconstitutionality of the president’s decree which in truth, they believe, undermines the Somali institutions including the president’s position.
A former Somali state’s man said,” president’s actions show that he does NOT trust the parliament for fearing if he allows the meeting of two houses, they will vote him out of office in few minutes. These tactics are risky and blowback is imminent.”
The civil society groups have been working and campaigning that the Somali political and constitutional crises to be solved peacefully in an effort to recommit all stakeholders to safeguard Somalia’s fragile democracy. The Somali people are quite aware that architects of the current crises can not be part of the solution.
Obviously, a political meeting of the real stakeholders, not preserved ones is what’s needed urgently as the likelihood of things falling apart grows. To say the least that everybody can imagine the consequence of Somali state failure and what is likely to follow. The end.