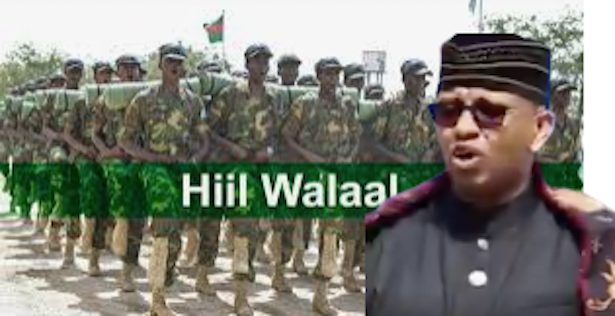 Following a formal complaint to the IGAD summit conference of December 2020 in Djibouti, the regional body published its report finding all five of the allegations Somalia directed against Kenya were to found to be meritless, lacking substantiation.

Somalia stated in its complaint that it was justified to sever relations with Kenya because – in essence: 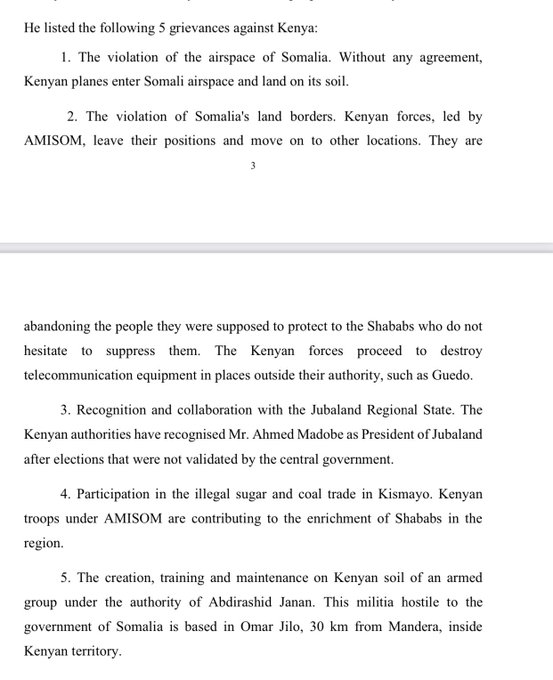 Contrary to subsequently bandied claims, none of the points on which the Somalia complaint forwarded was on Kenya-Somaliland relations and the fact that the two East African countries have found solid, common ground for multifaceted future cooperation.

The steps the took and the conclusions it reached were amply explained in detail in the report as below. 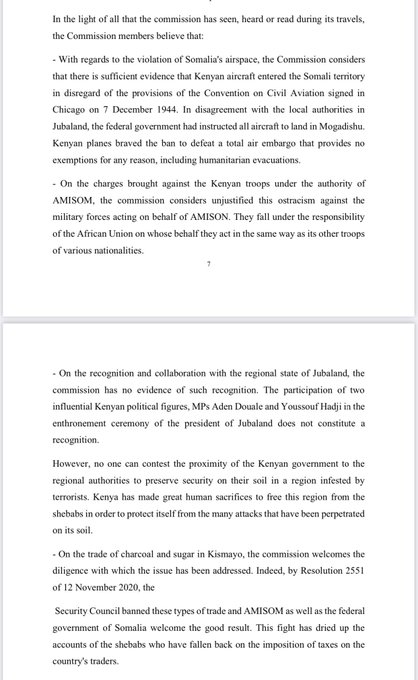 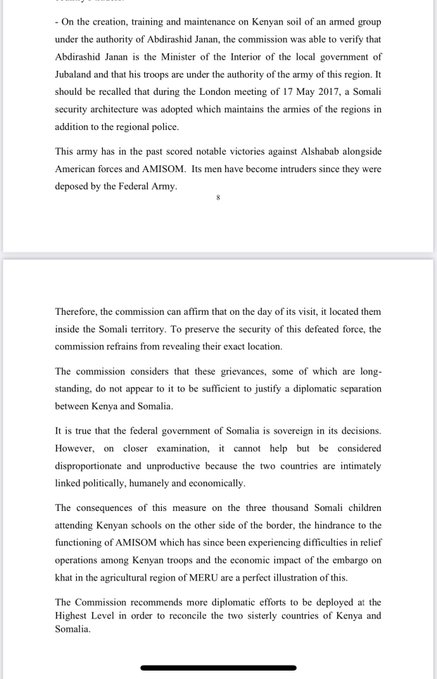 Despite these, the Somalian government threw all diplomatic suavity into the wind, flying into a tantrum against, particularly, Djibouti.

“FGS regrets the partisanship portrayed by the Republic of Djibouti and IGAD under the Chairmanship of Ismail Omar Ghuelleh,” a Somalia press release stated on Wednesday.

“In the Commission Report, Kenya’s President, H.E. Uhuru Kenyatta, instructed President ismail to push for the withdrawal of Somali troops from Gedo region,” the statement said.

The FGS called for the ‘immediate withdrawal of the baseless and unfair report and demands an apology’.

That not being apparently not enough of a folly, Somalia threatened withdrawal from IGAD altogether – another severance of relations along the lines of that it gunned at Kenya and Guinea Conakry.

It emphatically stated that if the report was not withdrawn as demanded that Somalia was ‘considering withdrawing from IGAD’.

Perhaps, the statement should have come with another veiled threat of an imminent diplomatic severance of relations with the Republic of Djibouti, too. 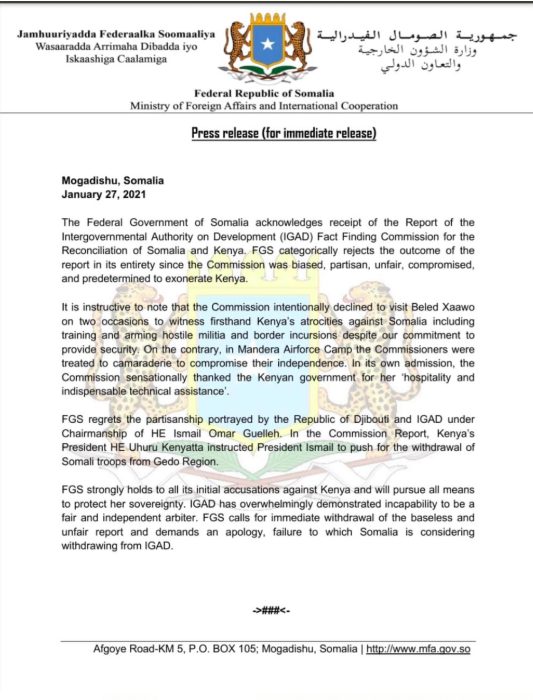 In an attempt to explain why Somalia was incensed with Djibouti, its Minister of Information, Osman Dubbe, gave a press briefing on the same day.

Dubbe practically thumbed his chest claiming that if not for Somalia, Djibouti would have been nothing and neither would it have ever attained its hard-fought independence.

If not for Somalia, Djibouti would not have existed nor would it have been independent at all, he said.

“Without us,” he said, “Djibouti would neither have been independent or a country”.

He called the report a stain that Somalia’s ‘brother’ (Djibouti) participated.

The IGAD fact-finding commission's report that finds no evidence showing #Kenya was interfering in #Somalia’s internal affairs leaves a "big stain" on the relations between the two brotherly countries [Somalia & #Djboiuti] which will exist a century, says Info minister Dubbe. pic.twitter.com/ZtADpmeQg6

The Minister, however, failed to explain why if, indeed, Djibouti was Somalia’s baby-born, it was not part of the union Somalia oft-touted.

Djibouti was not amused by the Somalia tirade. It corrected Somalia’s take on its participation of the fact-finding mission.

“Djibouti Gov was not untitled to Judge. But rather driven by the sole purpose of easing the tensions between our 2 sisterly Nations Somalia (and) Kenya. Under IGAD Head of State’s mandate, Fact-Finding Mission was carried out with Professionalism & Impartiality,” the Hon. Ilyas Dawaleh, Secretary-General of RPP & Minister Of Economy & Finance, in Charge of Industry, stated on his official Twitter account echoing part of a press statement (below) the Djiboutian Foreign Ministry released today in response to the Somalia allegations. 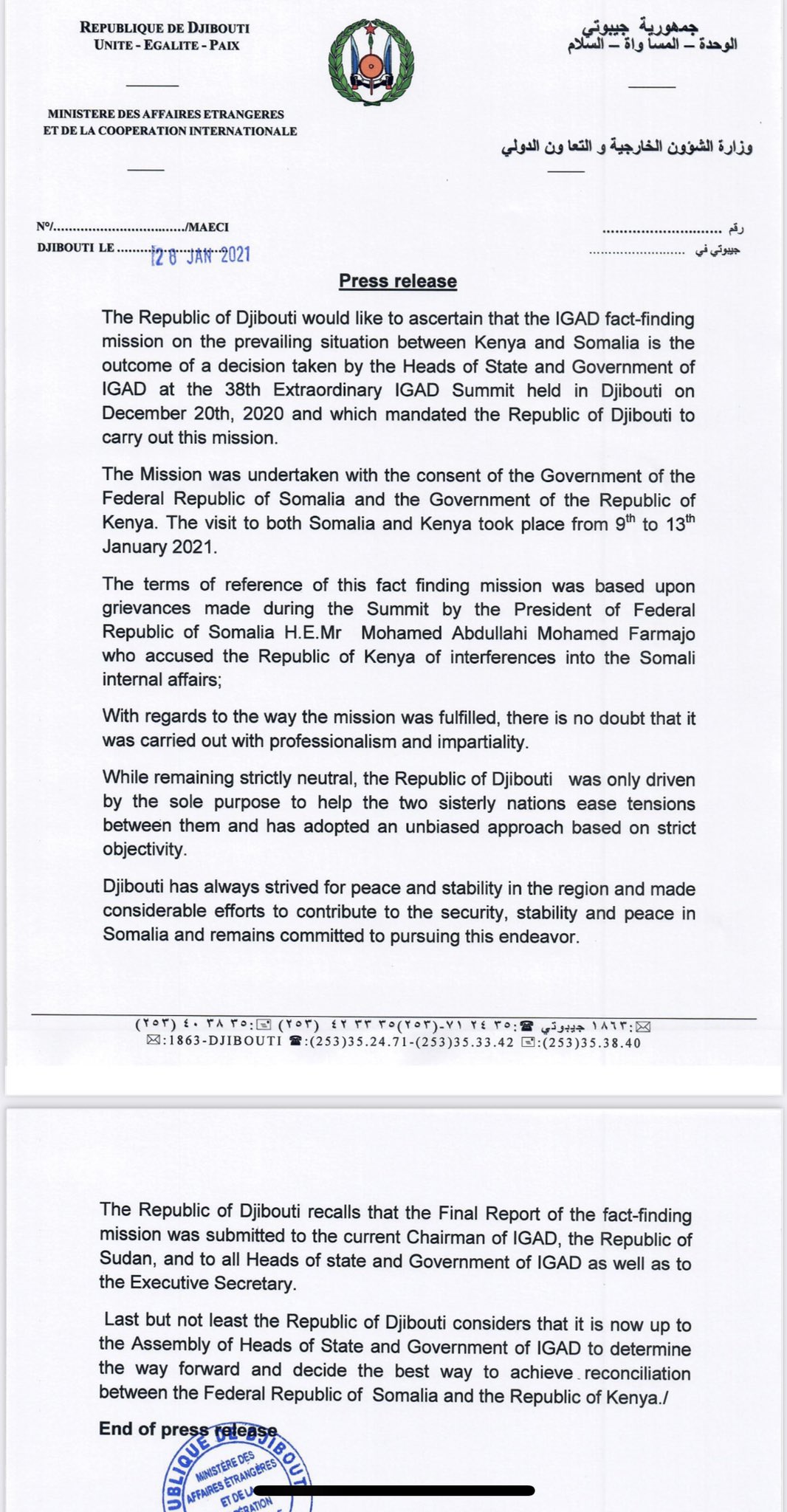 Somalia, obviously, is not grateful to both Kenya and Djibouti for coming to its aid when it needed most. Both countries have lost lives protecting the weak Mogadishu government from being overrun by the more committed, armed Islamist fighters of al-Shabaab.

A Somalia apology to both countries might be more in order here.

Kenya was the 2nd, joining in October 2011, to make up the AMISOM peacekeepers, Djibouti the 3rd augmenting the AU forces in December the same year. The first maintains over 3600 soldiers, the latter a little shy of 1000.