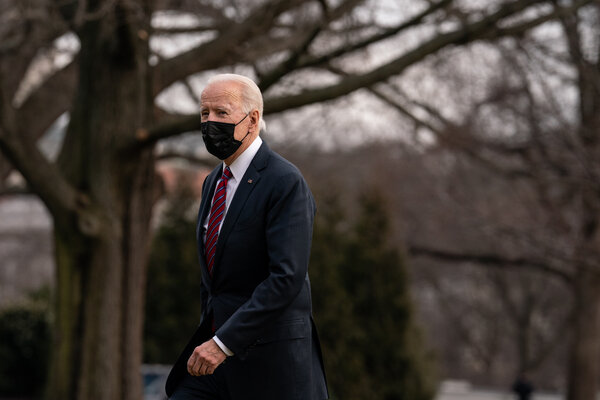 President Biden entered the White House last month with a broadly positive approval rating — but well shy of the two-thirds of Americans who expressed support for his former boss, Barack Obama, when he took office 12 years ago.

In fact, Biden’s net approval rating is lower than that of any incoming president since the dawn of modern polling, except for his predecessor, Donald Trump. It’s just another clear sign that we’ve entered a new era of partisanship: Media fragmentation and the hard-line politics it has helped foster may make it impossible for any leader to become a true consensus figure.

But it also bears noting that Biden’s approval rating is basically a reverse image of Trump’s. In addition to being loathed by Republicans and embraced by Democrats, he’s firmly in positive territory among independents — who had consistently disapproved of Trump’s performance.

A Monmouth University poll out last week found that 54 percent of Americans gave Biden’s performance positive marks, including nine in 10 Democrats and a plurality of independents, who approved by a 17-percentage-point margin (22 percent hadn’t yet formed an opinion). But among Republicans, his numbers were upside down. Just 15 percent approved, and 70 percent disapproved.

Biden may be facing a wall of opposition from Republicans — but it’s a smaller wall than it once might have been. This reflects the way that Trump drove away a significant share of the Republican base, particularly white voters with college degrees.

Nearly two-thirds of Americans supported Biden’s decision to rejoin the Paris climate accord, 70 percent backed the United States’ re-entry into the World Health Organization and 83 percent said they supported his order prohibiting workplace discrimination on the basis of sexual orientation and gender identity, according to an ABC News/Ipsos poll released last week.

This windfall of early support may strengthen pressure from members of his own party to move decisively on legislative priorities — whether through the reconciliation process or by doing away with the filibuster — without much concern about projecting an image of bipartisanship.

“People claim to like bipartisanship in surveys, and I’m not going to roast Joe Biden for giving it the old college try, but at the end of the day when bipartisan majorities — even Republicans — support more action to confront the coronavirus, the onus is on Joe Biden, and he will be judged by voters on whether he delivers relief,” said Sean McElwee, a founder of Data for Progress, a polling firm that advises Democrats in Congress.

“Democrats have a majority,” he said. When it comes to other policy areas, such as racial justice and climate change, he said, “They need to deliver on that majority.”

Still, most of the Republican Party’s rank-and-file voters have shown little sign of deserting Trump and his political movement. And over the past week, top G.O.P. lawmakers have started reconciling themselves to that fact.

Senator Mitch McConnell, the Republican leader, voted on Tuesday with all but five members of his party in the Senate to dismiss Trump’s impeachment trial, even after privately indicating to colleagues that he thought the former president deserved to be impeached.

This dynamic — of Democrats joined by most independents, but Republicans staunchly on the other side — plays out in some key results from a Pew Research Center poll released last week. Pew asked Americans to weigh in on their top priorities for the new administration. On some issues, the partisan differences weren’t especially strong. But on the most talked-about matters facing the country, Republicans and Democrats split decisively.

Although a majority in both parties saw it as important for the federal government to confront the coronavirus pandemic, Democrats and independents who leaned toward the Democratic Party were 33 percentage points more likely to say so than Republicans and G.O.P.-leaning independents. On climate change, a top priority for the Biden administration, the split was even greater: Three in five Democrats thought it was a pressing concern, but just 14 percent of Republicans did.

There was a similar gulf on racial justice. While 72 percent of Democrats said that addressing issues around race should be a top policy concern, only 24 percent of Republicans said so. While there have always been differences between Republicans and Democrats on the importance of addressing racial disparities — and on the federal government’s role in doing so — the gap may now be larger than ever.

That is partly because Democrats and Democratic-leaning independent voters, particularly white people, have evolved a great deal on these issues in the past few years. Meanwhile, Republicans, egged on by Trump’s politics of hostility, have only become more skeptical of arguments for racial justice.

There was one other point of broad agreement: In each party, roughly three in five respondents wanted the new president to focus on improving the political system itself.