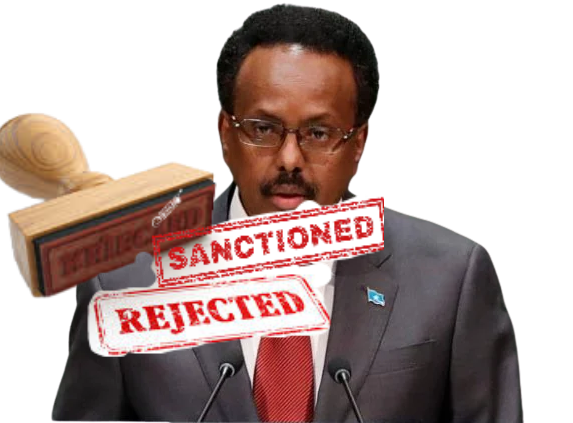 For too long, the State Department has given Mohamed Abdullahi Mohamed a free pass. That should end.

The parents began gathering in Mogadishu’s streets on Jan. 20. Soon, reports began trickling in about similar protests in other towns and cities across the country. The spark was an acknowledgment made by Abdisalan Yusuf Guled, the former deputy head of Somalia’s National Intelligence and Security Agency, on Jan. 18 that 370 Somali soldiers had died fighting in the Ethiopian province of Tigray. The head of the Somali parliament’s foreign affairs committee asked Somali president Mohamed Abdullahi Mohamed “Farmaajo” to investigate the issue and to clarify the whereabouts of Somali troops sent to Eritrea for training.

Both Farmaajo’s government, for its part, and Prime Minister Abiy Ahmed’s Ethiopian government denied the presence of Somali forces in Tigray. Somalia’s information minister, Osman Abukar Dubbe, appeared on state television and said that no Somali forces were involved in Tigray and suggested that Farmaajo’s opposition had fabricated the charges. The Somali government tweeted that it “strongly denied false reports” that Somali military recruits had died in Ethiopia.

Both the body bags and eyewitness accounts, however, tell a different story. The slaughter in Tigray is immense. At the same time, the Farmaajo government has been unable to provide insight on the whereabouts of Somali recruits transferred overseas. It should not be hard to put a soldier on a telephone unless, of course, that soldier is dead.

There is also precedent for such blatant backroom dealing with Ethiopia. At the beginning of Farmaajo’s reign, Somali forces kidnapped Abdikarin Sheikh Muse, a former Army officer, from his hotel in Galkayo and transferred him to Ethiopia. Farmaajo repeatedly denied having done so, right up to his release and reemergence. Somali parliamentarians privately say that Abiy and Eritrean president Isaias Afwerki seek to maintain Farmaajo in power, even at the expense of Somali federalism or democracy. In Somalia’s leadership, they seek an asset, not a democrat.

The United States and the broader international community have spent billions of dollars in order to pull Somalia back from the brink. A year ago, the State Department lobbied furiously behind-the-scenes in order to write off $1 billion in debt to American taxpayers that Somali officials had lost, wasted, or embezzled. The U.S. and British militaries, as well as the European Union, African Union Mission in Somalia (AMISOM), and Turkey have all invested heavily to train and assist the Somali National Army. That Farmaajo would send them to Eritrea—a state whose human rights record is akin to North Koreas and a state that subjects its own citizens to indefinite conscription, in effect, slavery to the Isaias’ whims—is a betrayal of his oath. That he would in effect traffic young Somalis for his own profit, however, crosses the line between poor leadership and human trafficking.

Just as Abiy and Isaias seek to use Farmaajo as their foil to control Somalia, so too has U.S. Ambassador Donald Yamamoto. For too long, the State Department has given Farmaajo a free pass. That should end.

The United States funds Somalia in order to enable its army to counter al-Shaabab and the Islamic State, not serve as Farmaajo’s personal property to trade amongst other regional dictators. To transfer of Somalis to fight and die on foreign soil and on behalf of a foreign dictator crosses the Rubicon. Every time the international community lets Farmaajo empower himself at the expense of Somali law, Somalia suffers and regional instability increases.

If the Biden administration truly wants to restore the credibility of American diplomacy, then the best way forward in the Horn of Africa would be to stop turning a blind eye toward Farmaajo’s abuses and instead treat Farmaajo for what he has become: a human trafficker pretending to be president. Rather than fund Farmaajo so lavishly, it is time to sanction him and treat him for what he is.