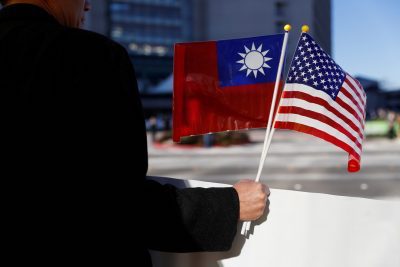 Guyana’s termination of a deal with Taiwan to open a representative office in the South American country not only insulted Taipei, but was also a slap in the face to the US, especially as US President Joe Biden announced that “America is back.”

Taiwan and Guyana on Jan. 11 signed the deal, which was announced by the Ministry of Foreign Affairs on Thursday and applauded by the US embassy in Guyana and US officials.

The new ties could have been another example of the “Somaliland model” — building commercial ties without diplomatic recognition — if Guyana could have kept its promise to its new friend Taiwan, which does mind its “one China” policy. The Somaliland model is considered a new way for Taiwan to expand international relations and curb its shrinking international space, even if Somaliland is not globally recognized.

Media reports have said that Guyana might have reversed its decision because it could not reject medical and financial aid promised by China, and it did not foresee the risk of building trade ties with Taiwan before the US offered its congratulations.

The Chinese Nationalist Party (KMT) missed the point with its hackneyed warning that the government should improve cross-strait relations before it expands foreign ties, as Taiwan would only be more under Beijing’s control. The KMT’s accusation that government fanfare about the office placed the Ministry of Foreign Affairs in a difficult position is not valid, as there would be media reports about it even if the ministry had kept silent, just as the representative offices that were launched in Somaliland and Aix-en-Provence last year were first revealed by the media.

While Taiwan can do nothing but accept being humiliated by a country with a population of only about 780,000 people, the US should be unnerved by China’s expansionism, which takes advantage of its new diplomatic weapons: vaccines and medical aid. Washington should ask whether its softened tone against Beijing might allow its rival to grow bolder.

In his first speech on diplomatic policy, Biden on Thursday said that “America is back” and “American alliances are our greatest asset,” while describing China as “our most serious competitor.”

“We’ll confront China’s economic abuses, counter its aggressive, coercive actions, and push back on China’s attack on human rights, intellectual property and global governance,” he said, adding that Washington is ready to work with Beijing when doing so benefits the US, such as fighting climate change.

While Biden has not talked with Chinese President Xi Jinping (習近平), US Secretary of State Antony Blinken’s discussion with Chinese Central Foreign Affairs Commission Director Yang Jiechi (楊潔篪) highlighted Washington’s concern for the stability of the Indo-Pacific region, including the Taiwan Strait.

The strings between Washington, Beijing and Taipei were pulled taut under former US president Donald Trump, but seem to be somewhat looser under Biden, who places more emphasis on multilateralism.

If that is the case, it will be interesting to see how the US’ Taiwan Allies International Protection and Enhancement Initiative Act, which encourages other nations to build official and unofficial ties with Taiwan, will be tackled in the next few years.

In related developments, Palau — one of Taiwan’s diplomatic allies — on Friday quit the Pacific Islands Forum over a leadership row, further threatening the region’s US-led alliance.

Taiwan cannot only rely on Washington for foreign relations. It needs new means to expand its international participation, especially as the “Taiwan model” for fighting COVID-19 and mask diplomacy have been forgotten. Now it has to beg for vaccines.

With its strength in the semiconductor, biotechnology and engineering sectors, the nation should promote technology transfers between foreign manufacturers and domestic researchers, and secure a footing in the medical supply chain.